Home Air How much of the F-35 is British? 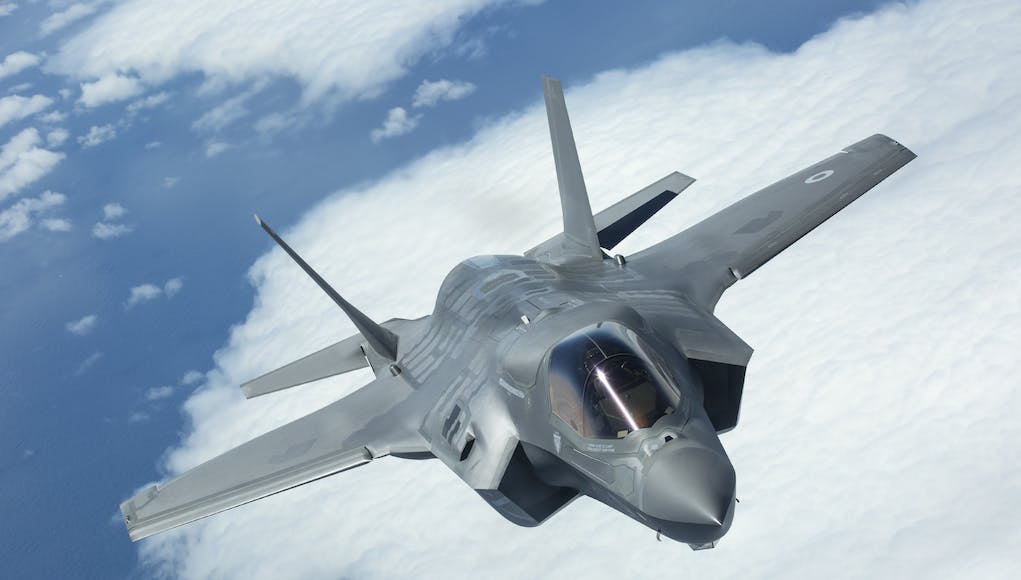 The F-35 features a significant amount of British developed components in addition to the 15% of every jet sold globally being built in Britain.

As the only Level 1 partner, the United Kingdom has garnered tremendous economic benefits from the F-35. British industry will build 15% of each of the more than 3,000 planned F-35s, in addition to a large volume of British developed aircraft systems including the electronic warfare suite. Conservative estimates put the jet at 30% British content.

The programme at peak will generate significant export revenue and GDP growth. The programme is projected to create and support more than 25,000 jobs across every region of the United Kingdom.

Hundreds of British software engineers with BAE have played a leading role in creating software for the F-35 aircraft that will be operational with the US Air Force later this year.

The software team at the BAE site in Samlesbury, Lancashire, has worked alongside Lockheed Martin, the prime contractor on the F-35 programme, to deliver the latest update known as ‘Block 3i’. There are more than eight million lines of code required for full operational capability. Block 3i equips the aircraft with 89% of the software code required. A mere four months later, after witnessing the aircraft’s impressive performance, U.S. and U.K. defense officials announced Lockheed Martin’s concept would go on to become the Joint Strike Fighter. In the years since, the F-35 has continued to evolve. It’s advanced stealth, sensor fusion, exceptional maneuverability, unmatched interoperability, and intelligence, surveillance, target acquisition and reconnaissance capabilities will provide the UK with a tactical airpower advantage for decades to come.”

UK industry is playing a valuable role in the manufacture of Lockheed Martin’s F-35 Lightning II multi-role fighter jet, an industry seminar at the Royal United Services Institute in London was told.

Leading British suppliers displayed their F-35 technology as part of the event, which attracted speakers including Philip Dunne, then Minister for Defence Equipment, Support and Technology, Air, Air Chief Marshall Steve Hillier, Deputy Chief of the Defence Staff (Capability), and speakers from industry programme partners such as BAE Systems and GE Aviation.

“This is the most valuable defence programme in the world at present, quite possibly of any peacetime period. The UK’s share of this production run alone will generate billions of pounds and tens of thousands of jobs for the British economy. To date, we estimate that almost £5 billion of contracted work has been placed with the UK supply chain.”

In conclusion, Mr Dunne said the benefits of the F-35 to the UK would be widespread.

“Our Armed Forces will be equipped with the best next new generation jet fighter available, giving them the operational advantage they will need to protect our citizens for decades to come.

The taxpayer gets value for money from the efficiencies that derive from international collaboration and the subsequent economies of scale. And our world leading defence industry benefits from its enduring involvement in a significant portion of the production work, creating jobs and promoting growth in our economy.”

Only if the UK buys at least 138 examples as promised. So far 8 have been ordered. That leaves 130 to go. Better get cracking or that 15% will get whittled down.

P.S. assuming the remaining 130 get ordered, the smart UK plan would be to bid on the Canadian F-35 business which will very soon be up for grabs because of their exit from the program. Lower pound should make the UK very competitive.

Of course that does require some British business acumen so …

No, you are thinking of offset work. That’s not the deal here. The UK co-developed the F-35 and so has a stake in the production. That’s what being a tier 1 partner means.

I think you could mention that percentage goes up to 32% when its the F35B STOVL model.

There will be quite a few of those built for UK, USMC and Italy.

so whats the breakdown among other nations?

We should be building our own aircraft!! What about generations to come, when we don’t have skilled workers in country anymore!! E.G. Nimrod scrapped in 2010, but we go and buy P8 maritime aircraft at rip of price!! Boeing must be laughing all the way to bank!! How do you get a job in procurement, because it looks easy!! As for the F35 boffins from the USA, have proved this aircraft to be a ” LEMON”!! F16 have run rings around it!! As for 100 million per plane, I think it’s complete rip off!!

You think the price of P-8s and F-35s is a rip off, wait until you see the price of something we designed ourselves! Fact is, that would be way more expensive. And we never buy enough of anything to make it cost effective. What do you think the people on the front line would rather have? Decent kit that works now or promises of something that would probably take more than a decade to get?

True nimrod was bad but the typhoon wasn’t so bad in fact just cheaper.

The Nimrod was scrapped because it didn’t work, was massively over budget and there was no end in sight. Does that sound like something we should have continued to throw money at? The P-8 is tried and tested.

No one actually knows how much Typhoon cost, the various governments kept writing the debt down !!! At least 10 years late, that must have cost a few quid. First flight (in Germany !!) in 1994. So, 22 years later its only just about dropping bombs, albeit in unchallenged airspace on trucks full of Jihadists !! The new radar will be a good step but Meteor is still not cleared is it ?? Brimstone is a good weapon as is Stormshadow but how long has it taken to get to this stage !!!?? The jet first flew in We have… Read more »

Nimrod was cancelled due to huge cost over-runs and still had a lot of problems. Your information regarding the F-16 is out-dated and inaccurate! A former F-16 pilot, now flying the F-35 has confirmed that the F-35 is actually more agile than an F-16.

Whoever you are replying to has gone I think

If we ordered 12 per annum for the next 25 years (300 in total) would surely benefit everyone and we would still be making money as a country based upon this articles claims.

It works out at £1bn per annum to purchase out of a £40bn budget. I dont see why we can’t

If you do a bit of online research you will find there is no need to be worried.

I hope they’re crap…. because turkey is getting them as well

Turkey are getting the f35

Max did you leave your brain even though it might be tiny in your socks. ?.

Is there intelligent people on here ?.

That is some 15% fantastic

https://goo.gl/akrLB3
I know this is your work George but it might help enlighten some people!

EW suite is entirely US.

Your point is exactly what? We are almost totally dependent on the US for most of our core equipment programs anyway.

Israel is developing its own EW and communications suite for the F35i, but I cannot see why it is cost effective for the UK to develop our own version.

I am highly critical of the Labour government 1997 to 2010 for their handling defence procurement, however one thing they got right was to make the UK a level one partner in the F35 project.

The industrial and economic benefits are hugely beneficial to the UK.

It was an great deal for us.

Looking world wide there is an obvious gap in the market for a propeller powered ground attack aircraft/pinpoi t bomber. Some thing that can fly from aircraft carriers and airfields. Not just tarmac or concrete run ways. Able to launch pin point strikes from forward positions. Think 21st century spitfire. Easy to maintain, easy to operate, easy to hide. I know I will come under attack for this, but why not. Could fly low under radars too. Faster than a helicopter and with greater range.