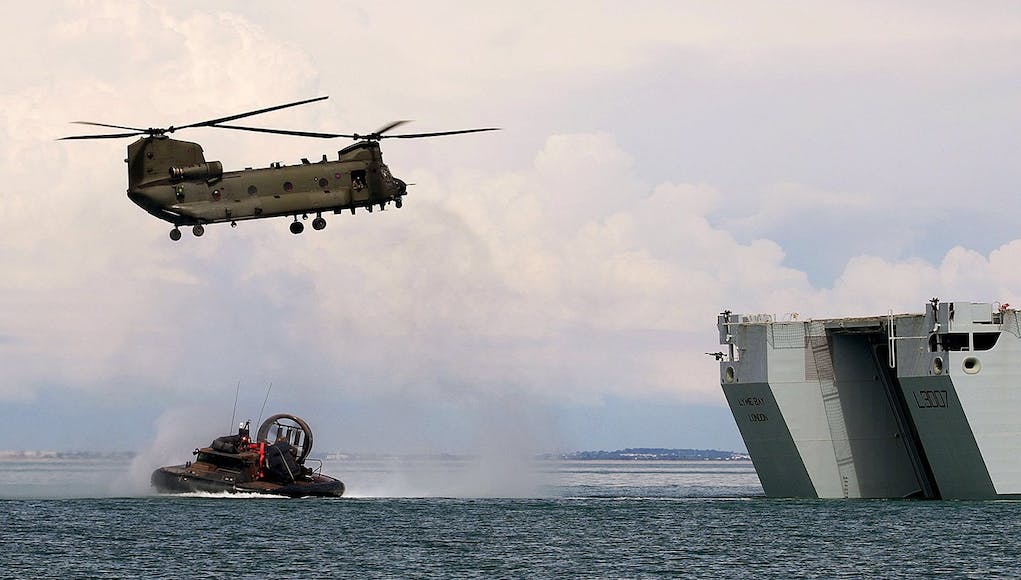 Played out along a 130-mile stretch of the French coast between Quiberon Bay to La Rochelle and involving 14 warships and support vessels, the exercise is the latest in a series this decade which have tested the combined amphibious forces of Britain and France to work hand-in-hand.

According to the Royal Navy, the goal is to create a real-word Combined Joint Expeditionary Force, able to respond to global events – conflict or humanitarian – should Paris and London decide intervention is needed, from 2020 onwards.

“As a big stepping stone to that goal, the French-led exercise allows personnel to share ideas, tactics and capabilities, test joint planning and communications, thus ensuring the success of any future Anglo-French amphibious task force and strengthening the strong bonds that already exist between the UK and France.”

“It has been a good experience working with the French Marines, they are a professional force. The only problem we have encountered has been the language barrier, but we are working around that,” said Marine Scuneman from X Company.

Wonderful to see such cooperation with a close European ally. Great stuff!

(Chris H) Richard – Sorry but I choked at your use of the word ‘close’ when speaking of the French. They are an ally. Thats it. Given they are ‘on manoeuvres’ with the EU and deliberately working against us over Brexit (as distinct from just looking after their interests) I am not sure how the word ‘close’ can apply….

Cause when it comes to military cooperation the relationship is actually quite close. Simple.

British forces invading France to hopefully rid the continent of the EU.

Damn it I thought it was real

Ld Elon Saviour of Britons, King an thee only Pharaoh touched by divinity and did breath the light.

Shut it down lads, you silly plebs, why you trusting the frenchies, dint you know their at war with Brits since murican independence? You god dammed traitors dint deserve these positions of protection as you tell the enemies them.

Brexit Mark Two ? David Davies gets bored and has a word with Gavin ?

74 years ago, it was being done for real on the Normandy beaches.

Good practice for when the EU goes off the deep end and were once again having to save them from some crackpot dictator.

Just to balance the brexiteers boorishisms. Maybe when Brexit leads to the EDL getting into power, our close relationship with France and practicing invasions might assist, and free us from Tommy Robinson.