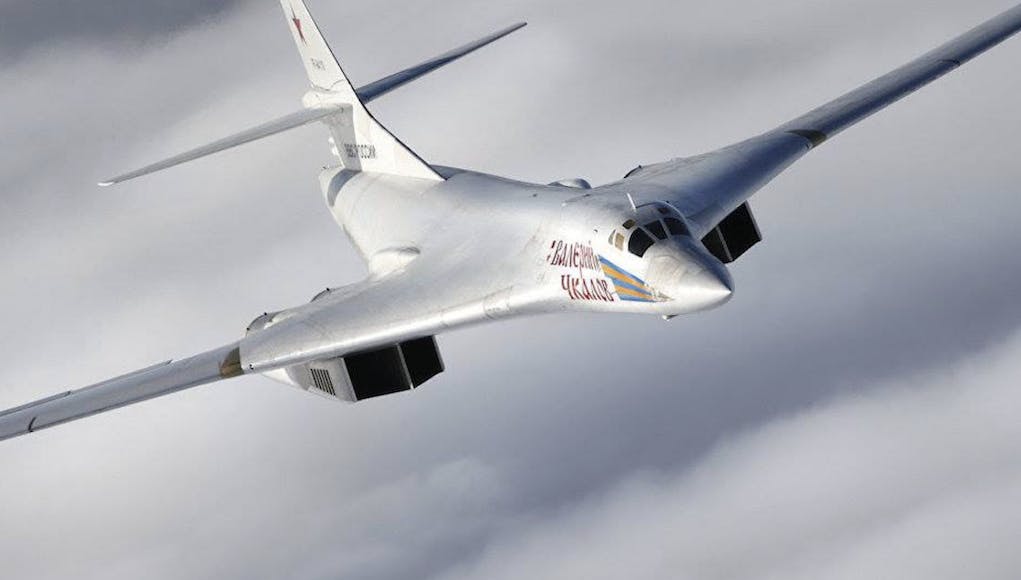 Typhoon jets shadowed two Tu-160 bombers towards the area near Shetland where HMS Queen Elizabeth and her Carrier Strike Group were exercising as part of NATO Exercise Joint Warrior.

The flights had been noticed on multiple Open Source Intelligence Twitter accounts dedicated to tracking movements.

The Russian bombers were reported as a “hazard” to other aircraft as they were not talking to air traffic control or using transponders.

Just a matter of when not if. I know this is routine work for the Typhoon QRA, but on the SE Asia cruise next year, the carrier group may well not have the luxury of ground based QRA/CAP and may have to provide their own. At what point does the Lightning force start training for this – carrier launched QRA?

They already have on previous exercises, but also did a bit of this during Joint Warrior. When on their World cruise, you can guarantee that a pair of F35s will be up flying combat air patrols, hopefully in company with a Crowsnest merlin.

I’d like to think the UK F35s started taking responsibility earlier. But with only 5 on board, it wasn’t likely and would interrupt training.

i think if the carrier group were still in the area the 2 type 45,s would have picked these aircraft up long before land based did,and would have been great to see F35 sent up along with the typhoons…

Andy, agreed but dont forget the Arliegh Burke or the Duth Frigate that is a part of the group. At the moment the QE has so much anti air protection they could destroy a complete nations airforce. It would have been good if the F35Bs did the intercept, but training is training whilst at the same time it shows the QE can do one thing whilst the RAF does something else. As for all these comments on an independent Scotland, this is a defence web site (and a good one) national policitcs have nothing to do here. I’m a 50-50… Read more »

Clearly Ivan has just given us a heads up as to their ability to attack our CBG. Firstly maritime reconnaissance get a fix then Blackjack bombers launch a stand off attack at range using skimming anti-ship missiles probably in conjunction with surface and / or sub surface attack. Consequently we need to be capable of taking out those Blackjacks at greater range. Problem is the F35B has limited range…

This Excersise has been pretty well reported, I don’t think anyone would have to try too hard to work out the Location of the Carrier Group.

Agree totally Rob, and exactly me point I have made ad nauseum on various old posts, but no words of wisdom on this point to date from the various sages on this excellent forum… maybe the answer is just a GULP! We really need a longer reach around any maritime assets deployed. We can’t just deploy to the Pacific without some form of back up too: remember the Prince of Wales in WWII etc.. Don’t misinterpret what I am saying here, as I am all for having our 2 carrier groups (!) which I think are fantastic, and protecting UK… Read more »

…and that reminds me, there is a whole air force going begging of ex-BA 747s being broken up as we speak at Kemble and elsewhere. Surely that could be a cheap stop-gap? Paint ’em grey and fit out with radar and shed loads of missiles. Sort of a long-range missile warehouse for shoot and scoot?

The Norwegian Airforce would be asleep then would they?

I doubt the group was silent and using a single picket to transmit the picture over link or using an orbiting Awacs to provide the task group picture . The Gold Picture that vessels receive is a Composite link picture from all sorts of Int sources. SIGINT, ELINT, radar and national sources. They probabley knew the exact minute when the things took off from mother Russia. On some previous vessels I was on we used to listen in to interplane radio talking to the tower prior to take off. We knew the aircraft where inbound before they even left the… Read more »

At first glance, TU-160 “Blackjack” is an impressive looking aircraft – just not sure I’d like to go to war in one! lol

Thank god for you on this site mate 🤙🇬🇧

As usual, facts from the expert. I wish people would take note rather than repeating the same old panic calls.

The Bear would also be signing its own death warrant as soon as went active with its radar.

It doesn’t work like that Rob, only in movies.

Robert it precisely works like that. This is a high consequence equation that needs to be built on data and not false national pride. Successful deterrence works when we can do more to them than they do to us. We need to make sure that is the case.

You are under playing our capabilities and experience Rob. We know when Russian aircraft are leaving the tarmac, to the minute. We have been playing this game of cat and mouse for a very long time.

Every mile inland the bomber base is, is yet more distance they have to fly – longer we have to see them and react. And they would have to know where our fleet is; this exercise has been well advertised so hardly a secret.

Are there any air launched anti ship missiles with that range?

450 nautical miles, so ~830km. And that’s a lower end estimate, most project the range to top out at 505-550 nautical miles on internal fuel as the engines become more efficient in later blocks.

The Russian Kinzhal air launched ballistic missile can (if it works like advertised) reach out to such ranges but it will be extremely difficult (nigh impossible) to get an accurate enough track from outside of the F35B’s combat radius in order to guide such a missile.

Not to mention that if it’s only carrying air to air missiles they are going to be a lot lighter than air to groundd ordnance, might extend the range a little more compared to the same F35B on a strike mission.

The QE arrived back in Portsmouth this afternoon, so the headline is a little misleading.

What are the Royal Air Force actually doing over the Middle...