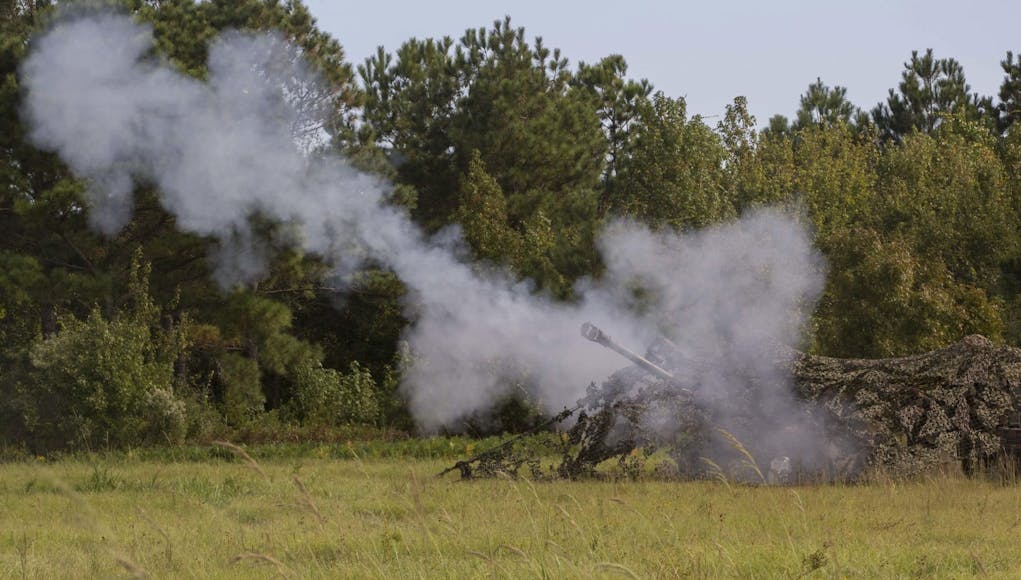 “We’ve been doing artillery training for the past week, preparing ourselves for exercise Bold Alligator with our coalition forces,” said Lt. Paul Wilson, a commando gunner with 29 Commando Regiment, Royal Artillery.

International training increases knowledge of job-related skills and allows for more opportunities to challenge each other to strengthen overall readiness.

“29 Commando Regiment Royal Artillery are Very High Readiness, spearhead troops trained as amphibious, mountain and arctic warfare specialists, but also can equally operate at the other extreme in the desert or jungle.

The Commando Gunners are equipped with twelve 105mm Light Guns and Fire Support Teams (FSTs) trained to coordinate firepower for the combat arm.  The FST also coordinates other indirect fire support assets such as mortars, fast jets, attack helicopters and Naval Gunfire Support from Royal Naval ships.  The batteries operate around the world on ship with the Royal Marines.”

“Looking at how [the US Marines] do things and how they use their equipment, we see minute differences in how we do things,” said Lt. Tom Brindley-Slater in a press release, a commando gunner with 29 Commando Regiment, Royal Artillery. “Being an [artillery gunner], the results are the same in the end.”

If the planned defence cuts involve the scrapping of the amphibious assault role, then 29 CDO RA will be lose its guns and focus solely on the FST role. This will result in a reduction in artillery personnel assigned to 29 to maybe less than a 100. Something similar was tried in late 1970s regards the airborne assault role. The para gunner unit, 7 RHA was switched to a light gun unit and send to BAOR with no para role whilst at the same time 4 RA had its ‘FST’ teams trained for the airborne role. It was soon realised… Read more »

“The para gunner unit, 7 RHA was switched to a light gun unit and send to BAOR with no para role whilst at the same time 4 RA had its ‘FST’ teams trained for the airborne role. It was soon realised that was a mistake and 7RHA converted back to the para role after the Falklands.” I remember them training during the early 80s at Roberts barracks at Osnabruck which they shared with 25 Eng Regiment. We were down the road at Quebeck unfortunately for us (73 Fd Sqn RE) we shared the camp with the KOSB. (Now there was… Read more »

I was lucky I only spent a relatively short time posted to BAOR.

Based at Celle in pre war German barracks.

If the mistake is there to make our lot will find it and make it in spades.