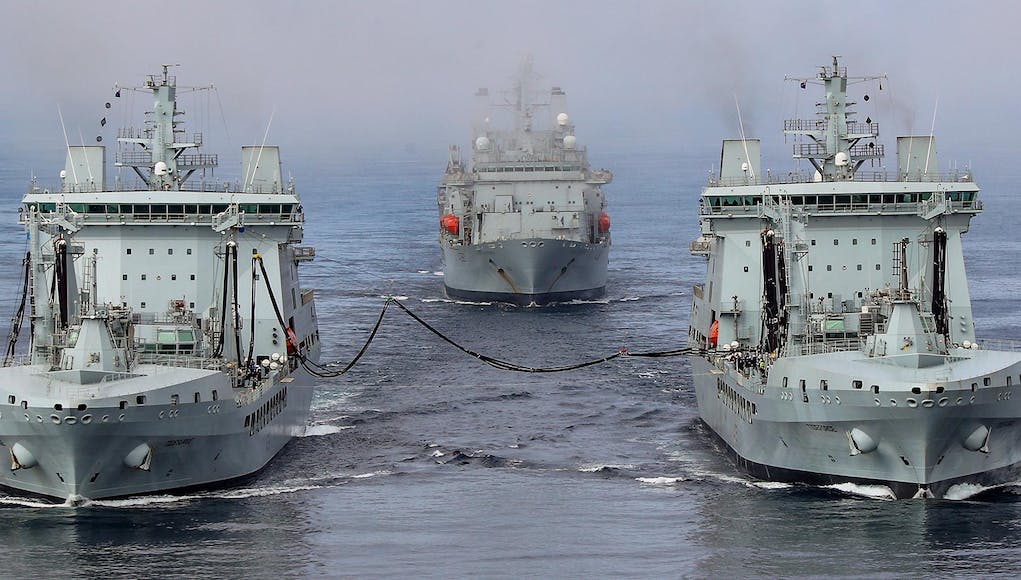 The images were taken from a Merlin Mk2, from 814 NAS, as it conducted a photographic exercise of RFA Tideforce (A139) and RFA Tidesurge (A138), with RFA Fort Victoria (A387) off the South West Coast.

RFA Fort Victoria, a stores ship and one of the largest vessels operated by the Ministry of Defence, recently put to sea following the completion of a £44 million refit by Cammell Laird. The year-long programme of work, represented phase two of RFA Fort Victoria’s life extension programme to keep her in service until 2025.

The other two vessels are Tide class tankers. The 39,000 tonne vessels will deliver fuel and water to Royal Navy ships on operations all over the world. Each of the four vessels can deliver more than 1,500 cubic metres of fuel every hour – nearly 400,000 gallons, or 1½ million litres… enough to fill the tanks of more than 27,000 family cars.

Marine engines do seem to produce a lot of exhaust emissions. I know nothing about marine engineering. Do they have catalytic converters etc?

I can tell you one thing – the last two rivers are the first in the RN to have catalytic converters.

I’m not too sure about the RFA.

No they don’t, the excessive exhaust is caused by running the main engines/generators below their optimum operating range. Which happens during a RAS as you put more on than you really need just in case something goes wrong, it’s not time you want to have an engine trip.

After a bit of reading, as usual no definitive answer, I think from what’s available the diesel generators (cruising) probably do have cats but when they go to ‘clarkson mode’ I suspect the big diesels for that don’t but they may do and it’s just not published, nifty trick on not disengaging the Electric drive motors as they run as generators. All in all quite fuel efficient for a ship.

Now watch as the 2 Wave’s get cut once these 4 are in place!

We really need to keep the RFA up to strength. For me it is one of the 4 key pillars of the UK naval capability.

Other three being Carriers/Carrier Air, Nuclear Submarines, and the Amphibious Ships/RM.

With those 4 in place the RN is somebody. Without them it is just an escort force for constabulary flag waving and ASW.

Ah yes, the photos I mentioned earlier. They really are a fantastic set of images, I for one can’t wait to see these ships in company with a QE, T45 and T23. I sincerely hope the Waves remain. With the Tides being more aimed at supporting the Carriers directly, it can be argued that the Waves will be needed to support operations elsewhere – or just simply act in the more long-range role – replenishing the tanker that replenishes the carrier (as seen here!) If we have any desire to grow the fleet with T31 (glossing over recent news), Rivers,… Read more »

Agree with all Lusty. The RFA really is a key capability that needs expanding.

Without the RFA assets the Amphibious/RM and Carrier pillars I refer to above can not happen.

It is a key enabler.

Apparently -5 means that people do not think the RFA is a key enabler!

And the Bay’s are RFA.

The reason is that the Wave class support Argus, the 3rd Bay and an additional six T26 sized vessels.

Aid budget needs to fund a new fleet of RFA ships that are primarily available for aid delivery and support but that can pitch in when the existing RFA vessels are stretched. It would be peanuts from £17 billion, 5 or 6 ships each costing around £2-300 million spread over 10 years. Would give work to the larger yards to keep them in business until we need new LPD’s and amphibs.

Somebody in here doesn’t like your sane and sensible suggestion ? and I guess thinks “the giving money away for nothing budget” is more important than defence and it seems doesn’t like the idea of providing ship building work to U.K. yards.

Progress, but get those Phalanx fitted asap.