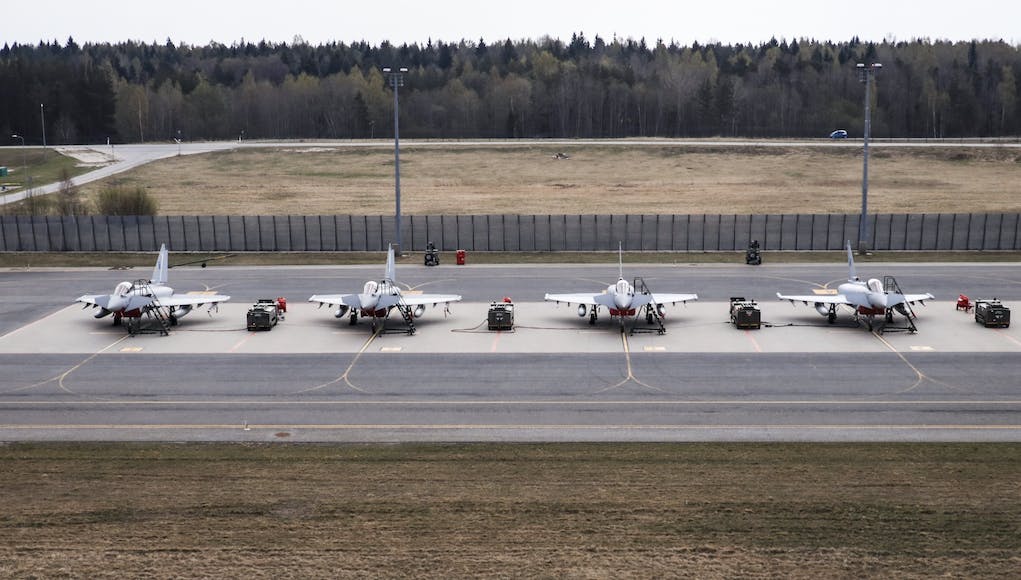 Typhoons from XI(F) Squadron normally based at RAF Coningsby in Lincolnshire began their NATO Baltic Air Policing mission from Ämari Airbase in Estonia on 3 May after replacing the German Eurofighters flown by the Tactical Fighter Wing 71 ‘Richthofen’ (Taktisches Luftwaffengeschwader 71 ‘Richthofen’) of the Luftwaffe.

“We have been working very closely with the German Air Force during our preparation and have shared both ideas and experience. They have done an excellent job over the last eight months and we will draw upon their support and our own extensive experience as we begin our own mission.”

“It has been a fantastic ten days since our arrival as we’ve used the handover period to prepare for QRA duties. We’ve got a lot to learn from our German colleagues and our two air forces are working closer and closer together.  For example, we have two Luftwaffe pilots just starting on exchange at RAF Coningsby on the Typhoon Force.”

Describing the partnership the Wing Commander added: “We’ve been doing a lot of work to see how we could work more closely in the future. We have the same aircraft but there are some small differences about how we do business and we’re trying to bring it closer together so that maybe in the future we could have RAF and Luftwaffe Typhoons side by side on QRA.”

Following their arrival in Estonia on the 24th April, the MoD say in a release that RAF Typhoon crews have been working with their German counterparts to prepare themselves for the NATO mission of providing a Quick Reaction Alert capability off the Baltic Sea area around Estonia.

“We’ve got a lot to learn from our German colleagues”
Like how to NOT maintain and operate Typhoons? Those two Luftwaffe pilots will be surprised there are more than 4 Typhoons to choose from as well.

And forgive me having a ‘Per Ardua’ moment but if these Tiffys are taking over from Tactical Fighter Wing 71 ‘Richthofen’ can this detachment be called ‘XI(F) Bader Squadron’?

I like that idea. He’s not commemorated enough in my opinion.

@Daniele Mandelli – It would appear someone has ‘flagged up’ my reply with that link about HAS at the Amari Air Base. Who DO some people think they are?

At least you got to use the link so objective achieved ….

Which ever one it is, the mind boggles as to why.

Beat me to it – I thought of HAS as soon as I saw them lined up.

I wrongly assumed that aircraft forward deployed to Estonia would be in HAS.

Does NATO not have the money to build them?

Doesn’t look like it. But as its an ex Soviet air base I am sure their is cover against the weather.

Indeed. I also note two hangers covered in grass as an attempt at camouflage, for helicopters by the looks of it further along from the ramp.

“We have some small differences… fly together”