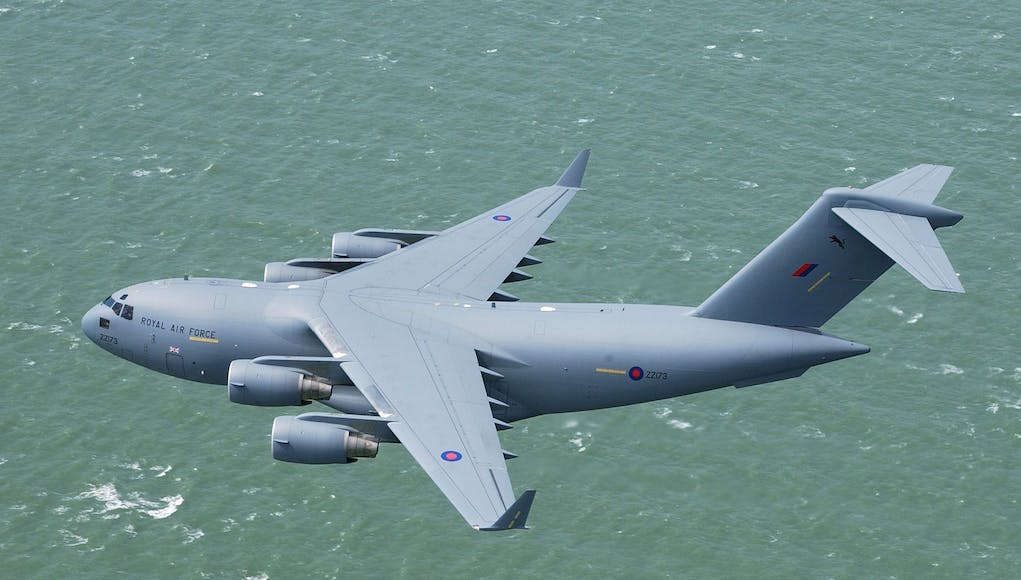 A C-17 belonging to 99 Squadron flew to Ibiza to deliver equipment to get a jet from HMS Queen Elizabeth back in the air after an emergency landing.

Yestersay a @99Sqn C-17 from @RAFBrizeNorton flew to @RAF_Marham to collect equipment and flew it out to Ibiza for this @USMC F-35.

This comes after a U.S. Marine Corps F-35 jet launched from HMS Queen Elizabeth and had to conduct an emergency landing in Ibiza as a precautionary measure.

You can read more about the incident here.

The aircraft carrier and her Carrier Strike Group are currently at sea in the area.

Is there cause for concern?

I asked a naval source about this, he told me:

“If it’s literally just the puncture it’s a safety thing. Being cautious with a $150m dollar aircraft. Why land on a small deck when you can a large runway etc. These things happen and will again. The jet is down safely. That’s the main thing. If I had to make a guess, a merlin will fly out with parts/engineers and fix the issue so can rejoin the ship. Not the first time won’t be the last.”

“But we can see the jet is intact, the wheel is punctured. It may not be the puncture that’s caused the diversion and that could have happened on landing. Pilots will know where the local airports are re having to divert. And as said it’s much safer to land at a large runway with all the facilities and emergency services if you have a sniff of a incident. They made the right call.”

The Strike Group includes ships from the United States Navy, the Dutch Navy, and Marines from the US Marine Corps. As well as British Frigates, Destroyers two RFA supply ships and air assets from 617 Sqn, 820 NAS, 815 NAS and 845 NAS.

This is the largest deployment of Fifth Generation Fighter Jets at sea in history.

We used to have downbirds with the Harrier all the time. This is nothing new, or out of the ordinary.

Does seem a tad much if it was just a puncture. Has the actual damage been revealed yet?

What makes it lousy?

Maybe it took a C-17 to bring the AA/RAC breakdown van?

Really? there is nothing cheaper than a C-17!?

It’s a simple re-tasking of available assets. Another day it could be a A400, or Voyager. That’s what the transport fleet is for.

And maybe there is a team + lots of test kit + an alignment jig?

And maybe it is all being deployed as a very valuable field test – carried out at a friendly NATO airport?

It is always tempting to think you could put the spare wheel and couple of blokes with a spanner set in a Twin Otter for £4:50 and land and improvise away and then have beers with Biggles as the sun sets.

With something this sophisticated you need the full test kit.

Shortly, it won’t be anything cheaper….like a C130!

Has a team from the carrier strike group gone out to ‘secure’ the aircraft or is it presumed safe enough in the hands of the airport authority? Also, what’s the process like after the emergency landing? Does the pilot have to stay with the aircraft the whole time or…

Pilot is probably partying while a couple U.S. Marines guard the jet.

If needed a hangar space would be requested, and the pilot would stay with the aircraft until it’s serviceable. Security wise, probably not an issue as it’s Ibiza and not Kabul. And the downbird crew from the carrier would also stay with the aircraft. The carrier will probably carry on with it’s planned tasking, and the F35 will catch up once serviceable. It’s going to be in the med for a while yet, so shouldn’t be a big issue.

They must have forgot to pack the trolley jack, according to a news report before Queen Ellizabeth left port ,they had all the spares they needed for both the F35 and Merlins , including a replacement engine for the F35.

Probably easier to fly a spare from the mainland than to load it on a helicopter from the QE. And there will be a host of tools required for the fix as well and possibly an APU to get the aircraft engine started for takeoff, the computer that interfaces with the F-35 operating system is the size of a hospital monitor trolley.

They will have everything they need. But things happen that require extra support. We had Harrier’s back in the day that had to divert, and inevitably it would require a part that isn’t in stock on the vessel. The vessels don’t carry every single part of an F35 at the end of the day. But that is why we have a global supply chain, and a flexible transport fleet that can be re-tasked to get parts to far flung parts of the world at short notice. Same story for the USN. They will have had F18’s stranded overnight at many… Read more »

Also, could it be that the decision was taken to send out parts and repair crew from the UK as the aircraft is relatively close, rather than raiding the parts bin on the carrier this early into deployment? So the on board spares inventory is saved for if there’s a problem further afield, or to fix an aircraft that is u/s on board? That being said, the US prob have a load of spares in Iwakuni if there was prob in East Asia, so again they could just fly out parts from there when the CSG is in that part… Read more »

That is true. Every situation is different, and solved using the best options available. One advantage of operating the F35 over the coming years will be having access to a global supply chain of parts. So maybe a part could be supplied from Italy, or Japan or a USMC vessel instead of parts coming from the UK.

I guess the c-17 is needed so they can pick the downbird up and bring it whole back to Brize.
#snafu

Not sure if these are USMC or RAF/RN maintainers but the F35b was spotted being fixed on the tarmac at Ibiza 5 days ago so evidently just a wheel or tyre replacment, liable to be back on the QE by now: https://www.instagram.com/p/CPl3whAh3mK/

Haha. Thank God was not in Caribbean, that would need 2 C-17 at least…

WO: it’s in Ibiza

Apologies if this has been answered already, but how does the RN supply these urgent parts to their carriers? I know the US have the C2, soon to be replaced by the V22.

The carrier has a few helicopters on board, surely.

I know the C2 and V22 are used by the USN as they have the ability to carry spare engines. Not sure if a Merlin has that cargo capability?