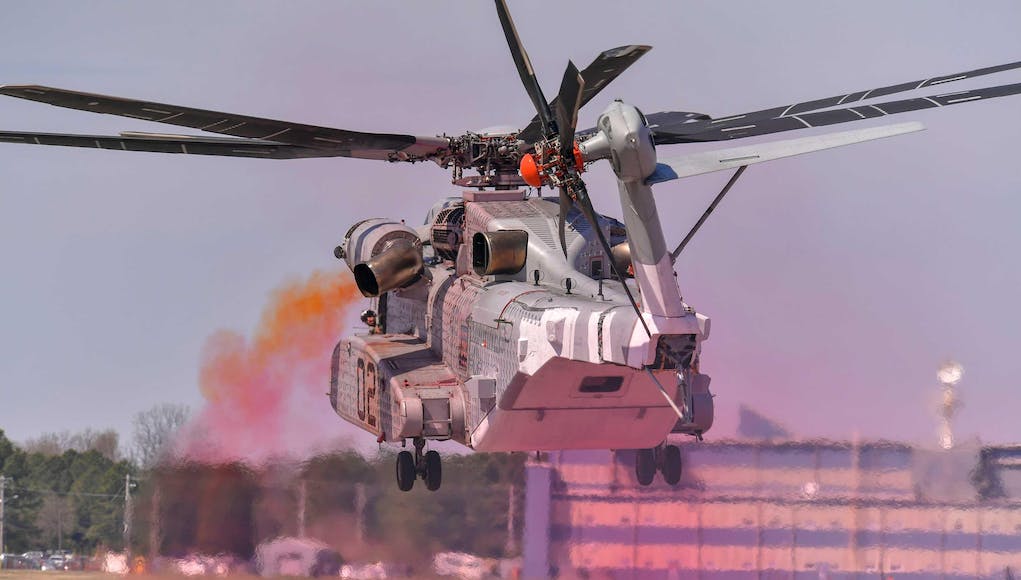 Engineers have mitigated an ongoing engine integration issue for the CH-53K King Stallion – the new heavy-lift helicopter from Sikorsky for the United States Marine Corps.

The above image shows coloured oil smoke indicating rotor wake and wind effects while external ‘tufts’ adhere to the outside of the CH-53K King Stallion showing surface airflow. These efforts validate a modification mitigating Exhaust Gas Re-ingestion for the new US Marine Corps aircraft.

“It was great to see the team turn the corner for the program and produce a resolution to an ongoing problem. This was a priority for NAVAIR, industry and the Marine Corps, and the team hit it out of the park,” he said.

The CH-53K King Stallion is the primary heavy-lift helicopter ever built by the United States government. It is an all-new heavy-lift helicopter that will expand the fleet’s ability to move more material more rapidly. That power comes from three new General Electric T-408 engines, which are more powerful and more fuel efficient than the T-64 engines currently outfitted on the CH-53E.

“EGR occurs when the hot engine gasses are ingested back into the system,” explained Cleavenger. “It can cause anything from increased life-cycle costs, poor engine performance and degradation, time-on-wing decreases, engine overheating and even engine stalls.”

“Team members worked different root cause analyses in parallel, determining the cause and developing design models to mitigate causes for EGR. From those models, iterative flight testing resulted in a validated model to assess the most promising answer.

That model was then used to construct components for one of the test aircraft that flew a rigorous series of test flights to collect data to validate the model. The extensive set of flight test data was then condensed, analyzed and presented in December 2019 to show that the result performed as predicted and provided an overall design modification that would meet the needs for fleet aircraft.”

They redesigned the exhaust manifold to vent the hot gas further to the side so it wasn’t being sucked back into the engines reducing performance.

I’m glad they’ve dealt with this, but am I right in thinking that there are still a number of remaining issues with the aircraft? I rememebr reading something about it eating through gearboxes because of the power delivery and suchlike…