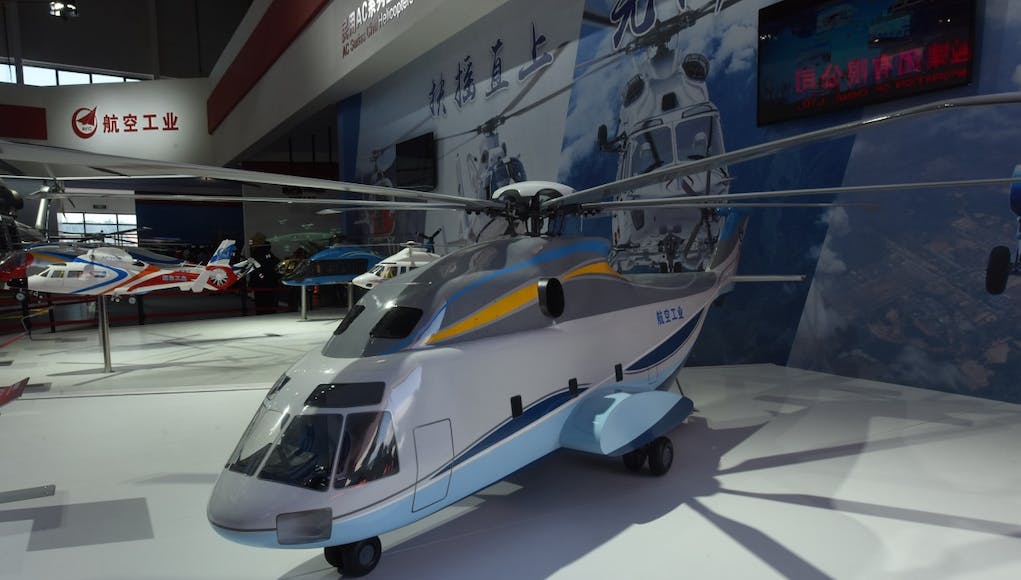 “For the next step, the Chinese government will accelerate the progress for a project approval and finish it as soon as possible, so the project can officially start,” Miao said at a press conference held with the Russian Industry and Trade Minister Denis Manturov at the 2019 Russian International Aviation and Space Salon (MAKS) in Zhukovsky, near Moscow.

China is the first partner country for the Russian project, as the two ministers held an opening ceremony at the stand-alone China Pavilion on Wednesday morning.

According to local media, the joint heavy helicopter Miao referred to is dubbed ‘Advanced Heavy Lift.’ It is expected to be 40-ton class, with a weight-lift capability of 15 tons, a range of 630 kilometers and a top speed of 300 kilometres an hour, Russian news channels previously reported.

In February, Russia’s TASS news agency reported that Russia’s state corporation Rostec was about to sign “the contract of the century” with China on the helicopter “in the coming two months” after four years’ talks, quoting Viktor Kladov, a Rostec representative.

Under the contract, at least 200 heavy helicopters will be built in China, Kladov said in 2017, RT  and others have reported.

Yes it is. Is there a difference to this and peaceful America/UK working together?

It’s certainly different to a lot of European co-productions!

You can hardly say Russia and China are shinning examples of a democracy . I presume thats what Mr Roach is pointing out.

I agree with your first sentence Dave considering China is communist of sorts and Russia is still learning democracy and trying to find a version that suits and works for us best. But being a democracy does not make you ‘peace loving’, recent history has shown this clearly

For Russia its probably best to get rid of pootin if it wants to start learning democracy properly.

That is for Russians to decide what sort of democracy we become Dave and I imagine it will be refined over the next 20+ years as the old guard move on. It does seem a little ironic a Brit lecturing on being a proper democracy when you consider the joke of brexit

lol I knew you would come up with brexit in your reply, it suites your divide and conquer agenda on UKDJ, i think what is happening now is democracy at work and its being fought in parliament not on the streets and considering Russian people have to protest in Moscow for even the right to vote in local elections and the protesters being arrested for just speaking to journalist, women getting beaten by police ,you’er example is pretty weak in comparison Ulya.
Keep learning though maybe one day hey.

Divide on conquer on UKDJ? Thanks for the laugh Dave. I don’t know how the protests have been reported in your media but nobody is being stopped from voting, some are being stopped from running in the elections, you can do a search for yourself as to why. As for the police arresting people, again a simple search will tell you why, the main reason is lack of permits. Some of the police behaviour could be better I agree, but no worse than how American or French police behave, so far none have been killed. City elections compared to national… Read more »

Well as I said you dont have to go far to find the footage of Russian police beatings and protesters being arrested for talking to journalists , not to forget Russias last national election with footage of vote tampering nation wide filmed by cameras put there to stop such a thing happening in the first place, lol!! its all out there so pleading ignorance is not going to work . You are missing the point Ulya parliament is debating to try and stop or go ahead with a no deal brexit not for sovereignty as you put it ;). Let… Read more »

When it comes to my agenda Dave, you are generally the only one to talk to me about Russian politics, you make comment, I reply, if you don’t like or want my replies, then don’t comment to me. Please feel free to read Russian sites, there are many like UKDJ, read, comment, push your ideas, debate, maybe learn something, whatever you like. I am more than happy to help with translation if needed, there might even be some sites in English, I have never looked.
Once again my flight home is ready, enjoy your weekend Dave

“When it comes to my agenda Dave, you are generally the only one to talk to me about Russian politics” ?? Thats not exactly true is it. It seems you have forgotten some of the comments you have written in the past and which you have replied to me first when it comes to a Russian topic and you forget others who are from the uk who have posted the same content on UKDJ which you have replied in defense of Putins regime. I have no need to learn Russian as its not exactly a world language nor do I… Read more »

Yes, the USA and UK are democracies

Looks remarkably like the Merlin. I will choose to believe that is because of logical solutions to the same problems the Merlin’s designers had. Nothing at all to do with it being copied.

Had exactly the same thought. I accept that it may merely be a superficially visual similarity but I have often thought it must be galling for the origins goes to see the copys be it purely in concept or well beyond, being sold or operated in such greater numbers than thir own originals.

Wait and see if it also has Berp blades, then you’ll know!

Time for Spec-savers Rob…doesn’t look anything like a Merlin other than the obvious necessary parts pertaining to a single rotor helicopter. The Chinese have been licence building French Super Frelons for a number of years…I expect that it would be the source of any copying!

Merlin and Airwolf’s love child then……..

This is a 40 ton aircraft…that’s more than twice Merlin’s 16tons and getting on for the Mil26’s 56tons (what a beast). It’s a big piece of kit, but the Russians know how to do this

Looks a lot like a Merlin, granted its supposed to be drived from the French Super Frelon, but the Chiense aren’t known for clean designs

Probably a lot more to do with computer modelling than any concious aesthetic. Similar ro how most cars are becoming similarly shaped by that process.

I do wonder if the Russians and Chinese have woken up to the fact that the US Future Vertical Lift (FVL) program, (As will also the Airbus and Italian endeavours in the same field) will leave them at a huge disadvantage.
The Russians have the expertise and the Chinese the money. That said, the Russian and India get together regards the Su57 didn’t go exactly to plan other than milk the Indians of a lot of money,

I believe the Kamov Design Bureau is/was working on a couple of designs but not sure how that is going or how much money is being put into it, I have not seen any announcements for a few years. As you said, Russia has the expertise and China the money, so this would be a good joint project if governments get serious about it

Does anyone know why most helicopter designs are single rotor. Given the advantage in terms of speed that a twin rotor offers, plus a potentially longer fuselage, I would have thought that there would have been more designs than there are! The last one that I recall was in the 1970s for an extremely large tandem rotor design by Boeing (I think that the article was in Flight Magazine)…unfortunately, it never left the drawing board.

Being lazy…just looked on Wiki..in fact one was built. But the project was cancelled in 1975. If Wiki figures are correct, gross weight was 53 tons!

The reason is simplicity (lower cost) and weight. One set of flying controls, one main gearbox etc. When you get to tandem rotors (Chinook) requiring two main gearboxes and a combiner gearbox or Coaxial (Ka52) the flight controls are doubled up adding weight and complexity. The main advantage is that all the engine power is being used to provide lift, unlike a single rotor design that requires a tail rotor. The Blackhawk series of helicopters have a tilted tailrotor, so it provides some lift as well as a counter thrust to the main rotor. The tandem rotor does not give… Read more »

Wow…thanks for that! Talk about comprehensive answers. I assume then that a tandem rotor gives you the potential of a longer full section fuselage for a given overall length or is there little difference?

The tandem rotor gives the most useful cabin size compared to its overall length. For instance the Merlin has a smaller cabin than a Chinook yet its fuselage is longer. This is because of the tail boom which is basically a level to put the tail rotor on. The longer lever = smaller tail rotor diameter to counteract the main rotor torque. The space within the tail boom can’t be used for anything useful such as additional fuel, as its too far from the aircraft centre of gravity. So its effectively dead space. However, there is a physical length limit… Read more »

Thanks Davey, once again a really comprehensive answer. I ‘ve read a couple of interesting articles in Flight magazine on the re-engine Chinook. They reckon that Boeing have reinforced the F model hull to take more powerful engines and that it doesn’t need any further structural upgrades in order to take the new engines. There is also a surprising 10% fuel consumption advantage with the new engines. I wonder if they will include a folding blade option. I would make sense for the RAF and its maritime applications!

Fab explanation and easy to understand. This has been today’s learning.

British drones “will always be under human control”