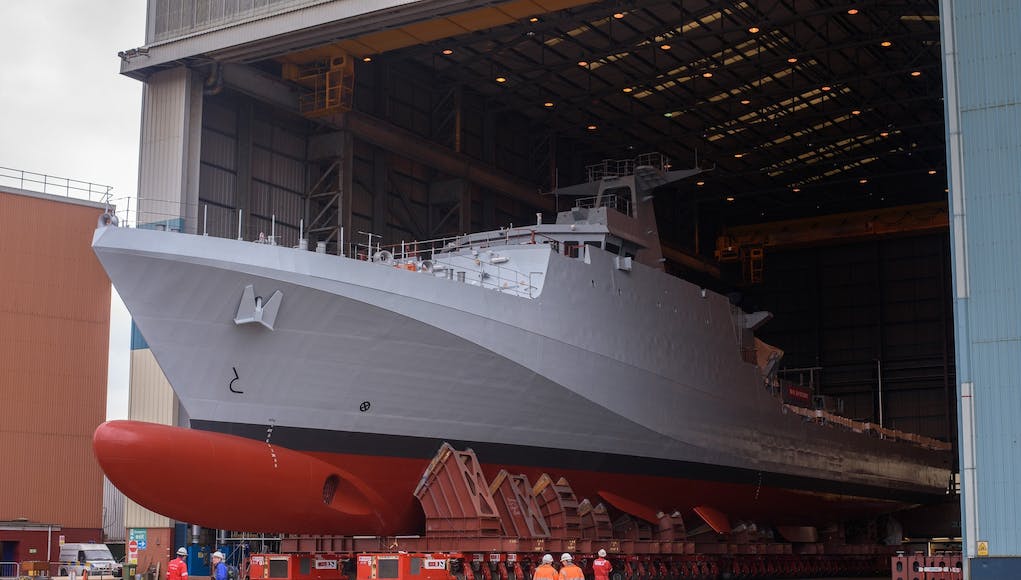 The Clyde will build 5 Offshore Patrol vessels, 8 Type 26 Frigates and assemble “at least” 5 Type 31 Frigates, an increase over what was previously promised.

Work on building eight Type 26 frigates at Clyde shipyards will begin in a few weeks as the first batch of 3 (out of a a total of 8 of the type) have been ordered.

As we predicted before the announcement that the first batch of Type 26 Frigates were ordered, some groups have taken the batch build process to indicate a cut. They are wrong.

Ordering in batches is common for projects of this size around the world and was last seen with the Royal Navy for the Type 45 Destroyers and recent Offshore Patrol Vessels. The Type 45s first batch order was for three vessels just like Type 26 and steel is to be cut on the first ship in Glasgow in the coming weeks.

An independent report into the National Shipbuilding Strategy by Sir John Parker has also recommended that the Type 31 Frigate build be spread across the UK, with blocks being constructed in yards in both Scotland and England.

The National Shipbuilding Strategy is intended to be a “radical, fundamental re-appraisal of how we undertake the shipbuilding enterprise in the UK, intending to place UK naval shipbuilding on a sustainable long term footing”.

Sir John Parker’s independent report designed to inform the strategy was released. The government say they will give Sir John’s work the full consideration that it deserves and will provide a full and detailed response in the spring 2017.

In November, after confirming that the Type 26 Frigate would be built on the Clyde, Michael Fallon also indicated that the Type 31 Frigate will be assembled there too.

“Nobody is shortchanging the Clyde. This is a huge moment for the Clyde; we’re confirming we’re going ahead with the steel cut next summer, earlier than expected. The first eight will be the Type 26 combat ships.

After that, the Clyde will be building a lighter frigate and we will end up with a fleet that is larger than the fleet at the moment.”

It’s understood that the build plan for the Type 31 Frigate will follow a similar pattern to that of the Queen Elizabeth carriers and early Type 45 Destroyers in that blocks will be built in yards around the UK and assembled on the Clyde.

Additionally, it was announced recently that “preparatory work” has started on the fourth of five new Offshore Patrol Vessels being built on the Clyde.

It is understood that the yards on the Clyde will now build 18 vessels of varying types, instead of the originally promised 13.

The two additional Offshore Patrol Vessels, hulls four and five, were announced as part of the last Strategic Defence & Security Review. The first of the five new vessels, HMS Forth, is expected to be handed over to the Royal Navy in 2017.

The Offshore Patrol Vessels had been ordered to fill a gap in orders after the second carrier and before the Type 26 frigates begin construction.

The full statement was made by then Minister for Defence Equipment, Support and Technology Phillip Dunne in response to a question from Brendan O’Hara, MP for Argyll and Bute, regarding the Type 26 frigates.

The original plan for the frigate fleet as mentioned above had been 8 anti-submarine warfare variants and 5 general purpose variants, this remains largely unchanged except for the specification and type of the later five vessels.

All will be built on the Clyde.

“Reached Out” – last time I looked the land I love and worship is Great Britain, I do not remember being us being inducted into the U.S. so why are you using their vernacular?

I don’t think this is positive news, we are buying 5 Rivers to replace 4 in current operations and we are building a mix of 13 ships to replace a class of proven assets of the same volume. This is in effect another major reduction in the RN’s capability and should be called what it is. If one or more of the carriers are sunk then this decision will be one of the reasons it happens. The RN top brass need to stand up and be counted while they are in office. Where is their integrity and honour? Truly shocking… Read more »

I don’t see how the Navy ordering more OPVs to keep BAE shipbuilding is business is good news for anyone apart from BAE. If BAEs ships were any good we wouldn’t be the only mugs buying them.

Well now, that’s lots of “it’s understood”s ( clue, that means they can deny it at any given time) how strange that this should crop up just after the SNP saying they will prepare draft legislation for a second Indy Ref

Any ship builders employees still stupid enough to actually believe this after what they did to you last time ?

Any union officials still willing to punt the lies to the workforce AGAIN ?

Nothing mentioned about the exclusivity agreement between the Blair Government and BAE which guaranteed BAE all naval construction work until 2024 in recompense for a savings contribution during the ineffectual Gershon initiative launched under that government aimed at generating savings across the public sector.

It’s good news to hear that the new class of Type 26 Frigates are about to begin construction. I’m also hoping to hear more of the same about a potential increase in numbers of the Type 31 class too. I think however that it was a dreadful mistake to cut from 12 down to a mere 6, the numbers of Type 45 Destroyers. They are world class in their capabilities, but they cannot all be in all places at all times because of the shortage of hulls in this class. I want the government to also keep in service HMS… Read more »

Other than butch and moan on here what have you done about this. Sick of reading comments on FB, UK Def Journal, SAVE royal Navy etc who spend a lot of time complaining and not doing anything.
Wrote to the relevant minister, secretary of state, newspaper and your MP. If enough people could be bothered to do that we might actually see some positive change instead of slow but perpetual decline.

RFA Wave Knight takes over from HMS Mersey in the Caribbean