Home Air Could the F-35 have laser weapons in the future? 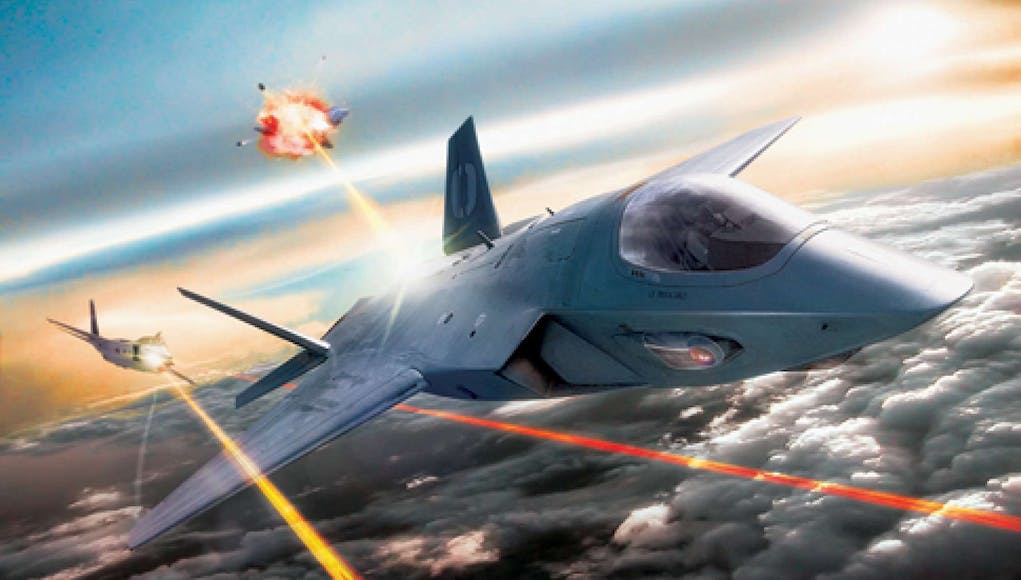 Companies involved in the F-35 programme are considering laser weapon concepts for use by the aircraft.

Last year, a press briefing in the Netherlands for the F-35 has restarted the rumour mill that the F-35 will be one of the platforms that will eventually feature laser based weapons technology.

In addition, it was reported that F-35 engine makers Pratt & Whitney are refining their proposed upgrade path for the F135 Joint Strike Fighter engine to include increased power and thermal management capability following feedback on its initially proposed upgrade package from the F-35 Joint Program Office. Additional power and thermal management capability will enable the use of directed-energy weapons and other advanced offensive and defensive systems and we understand that, if approved, would feature in an upgrade package called Growth Option 2.0.

The US military and its allies have allocated millions of dollars for directed energy research and development. The US Air Force is pursing laser weapon systems for installation on fighter jets as well as the AC-130J Ghostrider gunship.
The UK also recently announced its interest in demonstrating a directed energy based defence system, similar to Phalanx, for its warships.

Lockheed Martin, Notre Dame University, DARPA and the Air Force Research Lab last year started flight testing a streamlined and miniaturised airborne laser turret. The turret allows for 360 degree aiming coverage for directed energy weapons that will be flying on military aircraft in the not so distant future and is able to rapidly aim at targets and focus a directed energy burst through the atmosphere at those targets to disable or destroy them.

Lockheed senior fellow for laser and sensor systems said at a media briefing:

Tie or X-Wing fighters?
Seriously though, the scientists will need to really condense the power supplies to fit a fighter form. Directed energy weapons are a major power drain.

I understand how a USS Ford Class supercarrier with 2 reactors can support laser weapons – but I’ve never understood how an aircraft could ever power something like that!

Before we get carried away, i feel we should define laser weapon. For example the RN deployed laser dazzle weapons on its ships during the falklands. ( later removed from service on Health and seafty grounds as apparently it could blind the pilot of an attacking plane) The Chinese later fitted something similar onto their MBTs in which to target the gunner of anti tank missile teams. The Yanks have deployed lasers onto: Vehicles (Anti IED/Drone) Ships (Anti drone/Small boat) 747 (Anti Ballistic missiles) Yes the technology is leaping ahead, The Israelis deployed a laser version of their Iron dome… Read more »

Interestingly, the US Air Force plans to mount a laser on an F-16 sometime in the next three years – a LM program. The laser will be used defensively against air to air missiles. The decision was made not to mount it on on an F-35 because the pod would compromise the stealth characteristics of the airplane.

The Big Man
Reply to  farouk

I was first post today, but looks like the mods have deleted as it contained a web link. If you search: curious droid directed energy weapons There is a 20 minute documentary by Paul Shillito (?) on directed energy weapons. He discusses nuclear powered, lasers and microwaves and the pros and cons. Lasers appear a real issue as they are prone to weather atmospherics and as you ramp up the power plasma forms on the beam. Microwaves are interesting in their ability to destroy electronic infrastructure without harming people or buildings and can be targeted, so missing places like hospitals.… Read more »

Daveyb
Reply to  The Big Man

You have to be careful with that statement of: “microwaves and their ability to destroy electronic infrastructure without harming people….” Ever since the fist radio was invented people unfortunately found out that RF causes pretty nasty burns. This is especially true with high power HF frequencies, if the environmental conditions are right you get a form of St.Elmos fire created inside power amps (especially vacuum tube ones) along waveguides and antenna. At low power these are pretty harmless. But at higher power the plasma will cause burns, much like welding tans. Higher still it will melt the skin and cause… Read more »

The Big Man
Reply to  Daveyb

Interesting, but my point really was that the laws of physics are stopping lasers delivering what everyone thinks is the ultimate weapon. With microwaves, frequency plays an important part. Set the frequency high enough and you only penetrate the skin of a human by decimals of a millimetre, this purely causes discomfort, but is enough to deny an area. I bow to your greater knowledge on all the other stuff, although I am not sure it was all to do with my comment, but must point out that microwave ovens have never cooked from the inside out. They penetrate at… Read more »

Weapons that cause permanent blindness are against the Geneva Convention.

Ah, people have laser eye surgery all the time! maybe it might even improve their eyesight?? ? then everyone’s a winner – we stop the attacking missile and the pilot returns home with better-than-20/20 vision!

How much damage could such a laser do & with what time of exposure on target?
Would smoke, cloud, fog, mist etc degrade its ability?