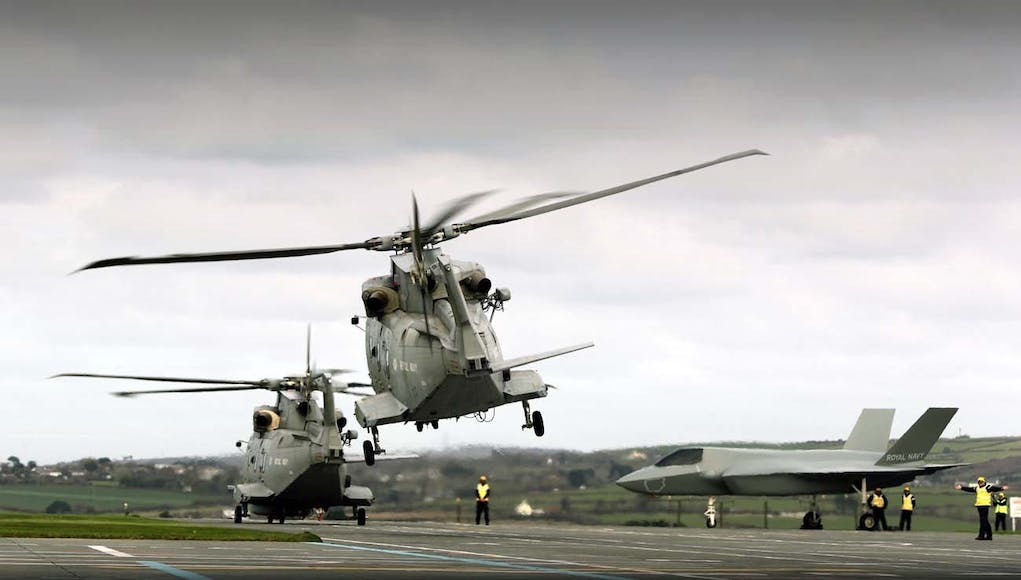 Culdrose is squeezing in more than 600 hours of flying as the base transforms into an approximation an active aircraft carrier in preparation for deployment to HMS Queen Elizabeth.

The base, the Royal Navy say, has billed itself as ‘HMS Queen Elizabeth on land’ in preparation for the new carrier entering service.

The scenario centres around the carrier having been sent in to help the people of Redruvia, threatened by its tubthumping neighbour Camberland, according to the Royal Navy.

“Merlin Mk2s, Sea King Mk 7s, Hawk Jets and King Air Avengers all lifted off from Culdrose to simulate the mass deployment of aircraft on to a carrier… and a short while later touched own on the ‘flight deck’ of ‘HMS Seahawk’, the beginning of round-the-clock operations which will see aircrew collectively clock up more than 600 hours’ flying (when typically they’d only perhaps get in eight to ten hours individually).”

“Culdrose is essential to the delivery of the nation’s carrier strike capability – and for us to be able to deliver our part in this, we need to make sure that we have the right skill and mind-sets for aircraft carrier operations.

Kernow Flag is the perfect way to prove that we’re ‘carrier-ready’: flying over 600 hours around the clock, in five different aircraft type, operating with ships, submarines and other aircraft in order to prove our carrier abilities.

Culdrose will be operating just like we will do on board HMS Queen Elizabeth. The exercise will test the whole air station from engineering to the supply chain, right up to the front end of flying.”

How many F35 Mock up’s do they have down there?

And are they moving the Sea Harriers around on deck too?

There are four ‘Mock’ F-35Bs in total, plus about 8 Sea Harriers (non flying but ground running). Enough to simulate a busy deck!

Landing Hawks on the flight deck too lol.
You couldn’t make this up.
Guess some will transition onto F35
Got to practise with what you’ve got I guess.

Great pic of the merlins and the sea king.

I take it that the F35 in the top image is a plastic, ground test article?

Bruce Sellers
Reply to  Bloke down the pub

Yes. it’s for the School of Aircraft handling as was. https://www.royalnavy.mod.uk/news-and-latest-activity/news/2017/june/28/170628-replica-training-jets-ensure-aircraft-carrier-ready-for-safe-aviation

My question answered.
Handy if the Cold War practice of using mock or obsolete aircraft as decoys is ever revived.

Great to hear about this.

‘its tubthumping neighbour Camberland’ – is that Cornish for Devon? (!)

For Redruvia read Redruth and Camberland read Cambourne, just up the road from Culdrose.