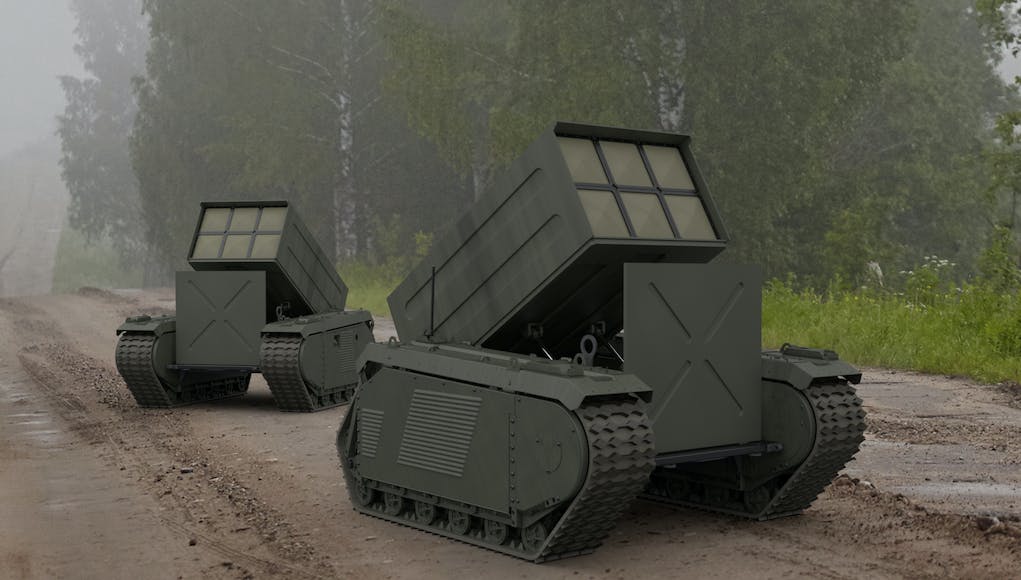 MBDA has showcased how the Brimstone precision strike missile can equip unmanned ground vehicles (UGVs) to serve as an “organic force-multiplier for the tactical commander” at DSEI 2019.

Carrying six Brimstone missiles per UGV, the development comes in response to the British Army’s ‘Prototype Warfare’ drive, which includes a renewed need to counter massed armour formations in high-intensity warfare and to ‘fight differently’.

“The THeMIS is a versatile and robust unmanned system with low noise and heat signatures that can negotiate demanding terrains while keeping the operator in a safe distance.

Using digital targeting data provided by the remote operator over standard secure military networks, the system will be capable of engaging line-of-sight and non-line-of-sight targets, with a choice of radar and SAL (semi-active laser) engagement modes.”

“This cassette magazine, with its high weapon loadout, is optimised to counter mass armour. Pairing the combat-proven MBDA Brimstone missile with a flexible and mission deployed UGV such as the Milrem Robotics’ THeMIS provides the tactical commander with the capability to rapidly and remotely deliver high volumes of precision anti-armour effects, importantly in all weathers, against all known DAS and at extended ranges.

This land vehicle adds to the Brimstone suite of platforms (fast jet, rotary, RPAS) and underscores its ‘One Missile, Multi-Platform’ versatility.”

The modular elevating launcher has a high load-out to provide the assurance of immediate fire support for multiple targets, say MBDA.

“The integration solution will take advantage of the high off-boresight agility of the Brimstone missile to avoid the complexity of rotating turrets.”

“The THeMIS has proven itself as a reliable and robust vehicle in very difficult conditions, e.g. in Mali during Operation Barkhane. Combining it with the anti-armour capability of MBDA’s Brimstone shows how existing and proven systems can work seamlessly together with novel technology. It is our aim and privilege to work with strong and innovative partners on creating new warfare systems based on the THeMIS.”

Integrating Brimstone to THeMIS follows on from previous work to fit the MMP missile to the UGV.

Pair one with every chally.

Who would operate the system?

And over what range?

Could this sort of thing go into our Armoured Cavalry Regiments of the RAC, alongside UAV?

Possibly RA as they operate the NLOS from Israel.

Spike NLOS. The MoD kept it’s purchase quiet then one was inadvertently filmed in Helmand I believe?

I’ve not seen a photo of a British Army one but plenty of YouTube clips of the Israelis using it, to deadly effect too.

I suggested RAC as the Swingfire was RAC, eventually.

Yes mate, 15 spike systems are initially purchased as a UOR, at first with the Israeli vehicles, for Afghan, however vehicles weren’t reliable or easy to get spares, all systems were then dismounted and placed into Spike NLOS trailers. These are still in service, operated by the RA.

Something like this but armed with spike NLOS, X amount carried on a truck ‘mothership’ to be deployed by royal artillery would be very useful.

A very interesting system. I could see something like this being used in Formation Recce Regiments to help disrupt advancing armoured formations.

This looks like something the Marines could add to their Vikings in Norway (subject to cold weather testing).

MBDA are doing a great job at the moment

MBDA has been doing a great job for quite a while now! It is responsible for a lot of great stuff already in our arsenal and this is all building further on significant past achievements.

MBDA seems to be a really high quality company judged on the quality of the products that it produces and I’m really looking forward to seeing more great stuff coming down the line in future. It’s going to be interesting to see them take a crack at the SPEAR 5 capability.

It’s not just the quality, the innovation displayed is phenomenal!
CAMM is a fantastic toy, reusing ASRAAM parts rather than from scratch.
I hope to see more reuse.
Like a SAM version of Meteor, but with a booster to make up for not being launched at speed from a fighter.
Or switching out the solid rocket on other missiles for the ramjet from Meteor.
Or build an anti shipping missile using their ramjet and the millimetric seeker from Brimstone.

Impressive. Unmanned is the future, land, sea and air.

Mate your right, and it’s brought about by necessity, as Israel is surrounded by none democratic, anti-Isreali countries and they know how to, and need to, develop and introdu new kit. We could learn a lot from them.

I know it’s a large system, but still think it would be good if we could find some way of mounting these armed UGVs on to the top of AFVs. This would mean no space taken up in any vehicle carrying the system or any lack of mobility down to towing the system. Plus most IFVs have rear door entry so UGV could be in the way of troops egress and ingress. Whilst on top of the vehicle the UGV weapons systems could be utilised by the AFV this could be useful especially considering the possible lack of weaponry on… Read more »

Once again the text totally covers the picture!

Force-multiplier. Noun. (plural force multipliers) (military) A factor, such as better positioning or equipment, which increases a unit’s combat potential, allowing it to fight on a par with a larger force. It’s a force multiplier, although I agree it’s also a sales pitch!

These don’t look particularly big, could the canister launchers not be fitted to a naval ship in order to deal with incoming fast moving threats?

Spike NLOS has a range of up to 25km. Does anybody know what the range of a surface launched brimstone would be?

The fact that the launcher only adds 400kg, it would be interesting to see what other wheeled vehicles this could be added to (but would need some sort of turn table). JLTV? Boxer?