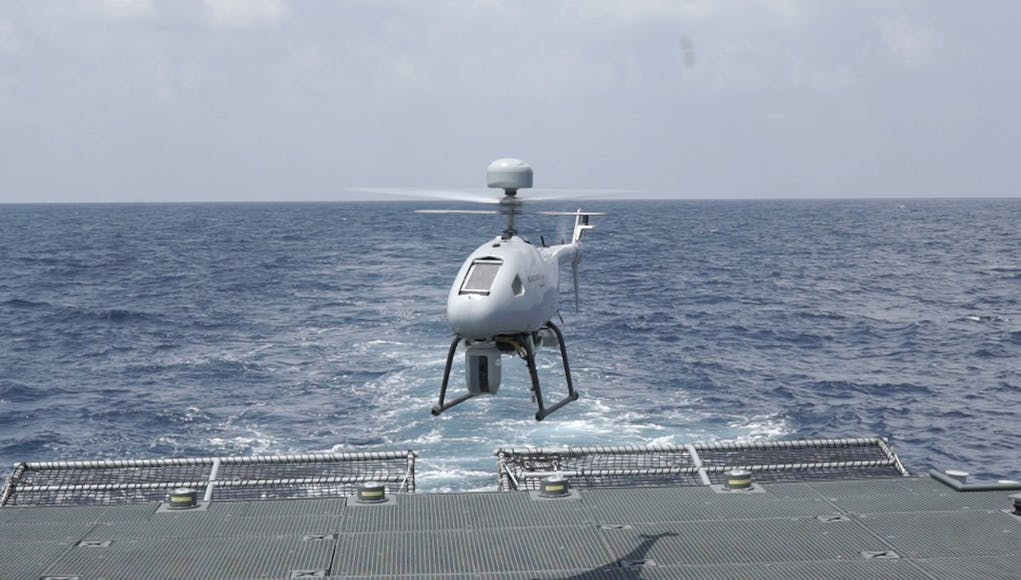 The firm say that new capabilities include an inertial navigation system with no dependence on GPS, as well as support for naval missions.

“Steadicopter’s Black Eagle 50 unmanned helicopter has been upgraded with several additional new features and is tailored for naval missions with its robust mechanical and electronic capabilities that support flight in maritime environmental conditions.

The company also recently signed a cooperative agreement with Israel Shipyards for the marketing of the Black Eagle as part of the defense, intelligence and surveillance systems installed on its OPV Family.”

The firm advise that Black Eagle 50 features a special inertial navigation system capability, based on input from the system’s inertial and other sensors. Through a unique and smart navigation algorithm, this input enables the continuation of the flight and the mission, without relying on GPS. This allows the Black Eagle 50 a significant advantage in GPS-denied areas.

According to Noam Lidor, Sales & Marketing Director at Steadicopter:

“In recent months, we have invested considerable resources in improving and equipping our unmanned helicopter in order to adapt it to a wide range of missions both on land and at sea. We have also developed cooperation with a number of Israeli companies ‒ each a leader in its field ‒ so that we can equip our helicopter with the highest quality and most advanced payloads.”

According to the firm, the specifics are as follows:

“The Black Eagle 50 is a VTOL (Vertical Take-Off and Landing) robotic observation system. It is an ideal solution for tactical maritime and land Intelligence, Surveillance, Target Acquisition and Reconnaissance (ISTAR) missions.

A data link connects the aircraft with the ground controller, enabling the transmission of live video and data between the two. The system has a steady hovering endurance of up to 3 hours and flight endurance of up to 4 hours. At only 27kg, the Black Eagle 50 is extremely lightweight and compact, with a maximum take-off weight of 35Kg, and payload capacity of 5Kg.

I’m sure some smarter (than I) people can say why a helicopter would in any way be better than a drone?

They can be used off any ship

A helicopter drone? If so They aren’t better overall but they can be used in far more places with limited space like small ships just like the Royal navy’s new OPVs without the need for recovery gear or a large landing strip.

However It would be great if we could upscale these and add a systems like crowsnest and then fly them from RN carriers. Surely a much cheaper option than a merlin in that role and saves our limited Merlins.

Mate how about a crowsnest on an extended towed cable, with a parachute to keep it up a few thousand feet? Serious question, belive the idea has already been touted! could be used on even the most basic warship, on the flanks of any carrier force? Thoughts?

During ww1 they did that with blokes harnessed to kites as observers. I would imagine the issue would be transmitting of sufficient power to the crowsnest without exposing the intelligent line (signal) to overpull /stress. Some interesting work in oil and gas on such umbilicals for sub-sea / downhole applications but not sure how easily that concept could apply to an airborne tether version. Weight v strength v power v signal integrity. Data can be transmitted several km’s but the abilty to send power safely and consistently is very limited without impacting data i understand. Would also be creating no… Read more »

Great idea. The simple solutions tend to be the best solutions. Still worth pursuing all these ideas it could be just what is needed. Originally they were only going to build nine computers for the whole world because they couldn’t see a use for them – now look how many there are!

Having worked with towed sonar arrays I can verify the weight of the cables used. Not such a problem of course when the armoured cable is immersed in sea water. In fact cable weight, when trying to depress the sonar fish, can be an advantage! But when going up-aloft cable weight becomes a significant factor. What about small-scale airship drones?

i can concurr with the cable weight – we do a lot of ROV propulsor design and the biggest challange is developing the propulsive power to fight the current and cable weight – you would be amazed at how much power a small ROV needs. the same priciple would apply to an airborne tether – weight and cable drag combined with cross winds and turbulence – you would need significanly more power available and a much more sophisticated auto stabilization system.

Fair point, as ever the devil is in the detail!!!! What about a young matelot, warm jacket, gloves, big pair of binos and a radio, being towed along on a parasail? Extra ration of carrots and a jolly well done at the end of the day!!!!

Vertical take off from the rear of a destroyer or frigate

Apparently, the Scan Eagle drone (operated from some of the Type 23 frigate’s) was quietly axed as a budget savings, leaving our warships in the Gulf without any unmanned aerial capability. The same article indicated that the MOD didn’t want to use the Predator type drone in the region for fear of them being shot down. The Iranian’s are making extensive use of drones, and we have either cut ours to save money or are afraid to use them.

Maybe the Brits should start shooting down the Iranian drones. They seem so worried about escalation that they let the Iranians basically do whatever they want.

Hypersonic anti ship missiles are about to change the game. The Indian/Russian Brahmos asm already in service have a speed of Mach 4. (Worringly the Navy’s Artisan/Sea Ceptor data says the system can deal with speeds up to Mach 3, just check.) Mach 4 only gives a ship about 25 seconds warning of incoming. If a radar could be attach to these mini choppers they may be able to provide a vessel with it’s own airborne early warning systems. At its 10,000 ceiling the horizon would increase from about 20 miles to 122 miles. Increasing warning time for a Mach… Read more »

I’m not sure the “(Worringly the Navy’s Artisan/Sea Ceptor data says the system can deal with speeds up to Mach 3, just check.)” is accurate but I might be wrong and if I am I would welcome specific links to demonstrate that. My counter-arguments (which I emphasise I am open to counter-arguments against) are … 1 – On Sea Ceptor yes, speed is stated as Mach 3, but when intercepting an incoming missile, does that preclude it intercepting a target with approach speed more than Mach 3? I can see why in an air-to-air scenario it’s a show stopper if… Read more »

May 25, 2022
Even just ten years ago shipbuilding in Scotland was described as a ‘feast and famine’ industry but things are very different now.