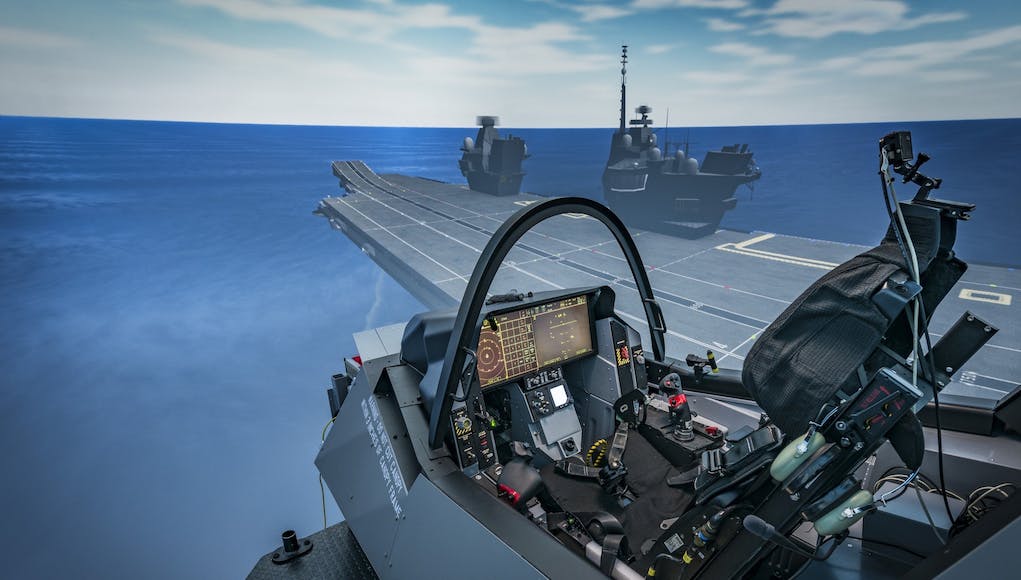 The bespoke £2M simulator facility offers a 360-degree immersive experience for F-35 pilots to fly the jet to and from HMS Queen Elizabeth.

The simulator comprises a cockpit moved by an electronic motion platform and a full representation of the ship’s flying control tower (FLYCO), where a Landing Signal Officer on board the carrier will control aviation operations.

The 360-degree view for pilots is vital as potential obstacles on an aircraft carrier are often behind the pilots as they land. Over the coming months the simulator will be used by UK and US military test pilots who have experience of flying F-35s on US carriers.

“The immersive experience is as near to the real thing as possible. The data will show us exactly what will happen when F-35 pilots fly to and from the Queen Elizabeth carriers. The trials we can run through the simulator are far more extensive than what we will do in the actual flight trials because we can run and re-run each trial until we have all the data we need.

The simulator provides greater cost efficiency for the overall programme and is extremely important to the success of the first flight trials.”
The pilots will practise thousands of ski jump short take-offs and vertical landings that use both the vertical thrust from the jet engine and aerodynamic lift from the wings, allowing the aircraft to take-off and land on the carrier with increased weapon and fuel loads compared to predecessor aircraft.

It recently emerged that divers inspecting the hull of the HMS Queen Elizabeth discovered that the top coat of paint had failed to adhere properly.

“There are areas of the hull of HMS Queen Elizabeth where the top-coat of paint has not adhered to the undercoat.

We have worked with our suppliers to find out the reasons why and are putting in place a process to bring this to the right standard ahead of sea trials.”

It came to light earlier in the month that HMS Queen Elizabeth will now sail for sea trials in Summer instead of Spring as previously expected.

Thats great, but isn’t it late in the game to “begin” flight simulator flights? According to the Wikipedia procurement site for the F35, the U.K. has only actually ordered three aircraft. Is this a Wiki inaccuracy? If not, and HMS Queen Elizabeth is to sail in 2020 on her first operational mission, it would appear to be time for the U.K. to place a significant order.