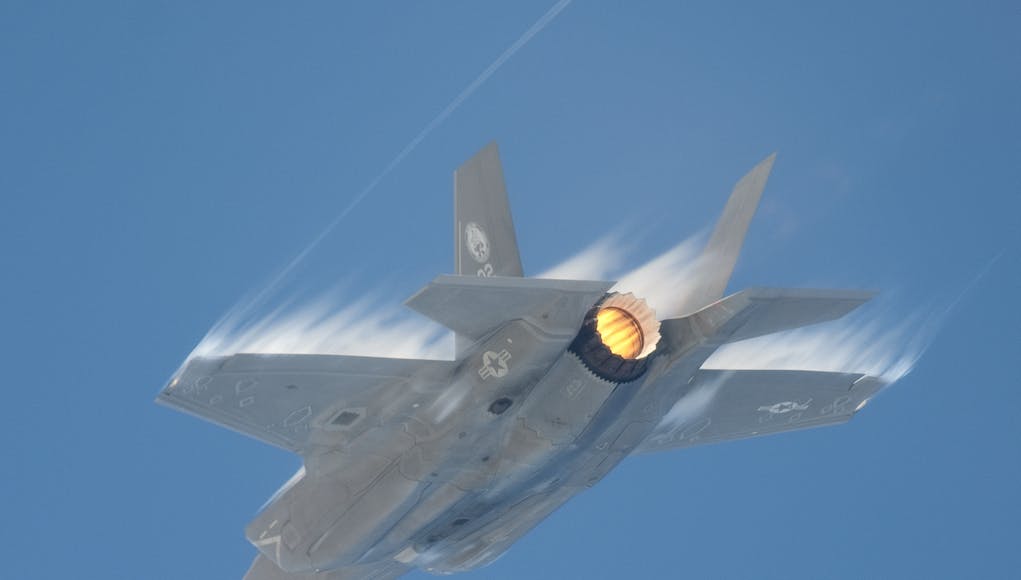 United States Marine Corps pilots recently dropped dozens of live bombs from the F-35B for the first time, bringing the aircraft a step closer to readiness.

It is reported that the F-35B far outperformed older aircraft in its ability to deliver GBU-32 munitions in obscured conditions. The key, reportedly, is the F-35’s synthetic aperture radar, which allows it to paint a three dimensional map of the ground, offering pilots enough detail to deliver bombs even in little or no visibility.

Major Christopher Trent, VMFA-121’s pilot training officer and one of 14 pilots who flew several of the test sorties said:

“It was a confidence builder for the entire team that they can load bombs, wire and put them on the jet right, and the jet can put them where they are intended to go with the pilot’s targeting. In extreme weather conditions or dirty battlefield conditions, the F-35 still has the ability to target munitions for the guy on the ground with the same warheads legacy aircraft carry today.

“We will transition to normal operational training priorities for a normal gun squadron, training all the remaining pilots up and getting them ready for combat should the squadron be called to go.”

According to other sources reporting on this event, Trent said he would confidently take the aircraft into battle today.

Hurrah. Moving on and on…

f 35 uk will sell for china

We are going to buy china with an f35? Sounds like a deal to me. Hong Kong will be happy.

poor for hong kong. they really want to split from the communist Chinese.

The article is a year old! How about something up to date.

I can see why Royal Navy are having the F35B but I don’t see the need for Royal Air Force to fly them as well they could have some more Typhoons or F35A.

The RAF need the B variant so that they can operate off of RN carriers. Like the Joint Force Harrier used to operate.

And overland from limited facility airstrips like the Harrier did. This has been a fundamental need for decades and hasn’t changed.

David Anthony Simpson like Sea Harrier then ?? still no need for RAF to fly them TBH RN pilots can fly them overland, let RAF fly F35A

Agreed, convert out tankers with booms and buy F35A’s, the running costs alone saved on the B model will make up for the tanker conversion.

F-35A is still on the cards for RAF service. Certainly an attractive option to replace the Tornado force.

No – the 35B is directly replacing the GR4 force. If we do buy the 35A it will be (initially) to replace the early tranche Typhoons from 2030 onwards.