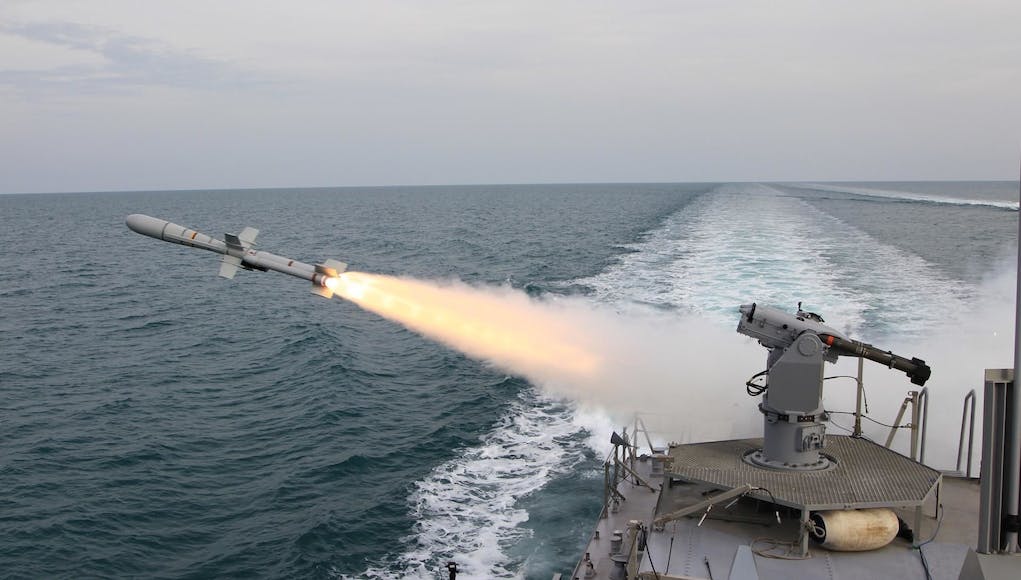 The value of the anti-ship missile market is expected to climb over the next 15 years, according to data compiled by Forecast International.

The anti-ship missile market will be worth about $20 billion during the 2017-2031 period, based on data derived from what Forecast International call their ‘Platinum Forecast System’. During this time, the market’s value of production will steadily climb, from $1.089 billion in 2017 to a peak of $1.467 billion in 2027; the market will slightly taper off in the outyears.

“China will produce the most missiles, but Western firms and Russia will win the greatest number of individual export contracts,” said Larry Dickerson, senior missile analyst at FI.

“The systems are overshadowed by their anti-armor and strike counterparts, which are routinely hitting targets in Iraq, Syria, Yemen and Libya,” said Dickerson. “Anti-ship missiles have had few opportunities to shine in the last 20 years. Nevertheless, these systems remain an important part of naval combat.”

New systems are in development, but will not be available until the 2020s. Europe is considering the joint development of a new anti-ship missile to replace a plethora of existing systems.

Dickerson notes that the anti-ship market could eventually merge with its strike missile counterpart.

“Today, different missiles, such as Harpoon and SCALP-EG, perform these missions,” Dickerson said. “Yet missiles capable of engaging a wider array of targets than their predecessors are growing in popularity. Eventually, a single missile could be capable of hitting surface warships and land-based targets, meeting the military’s anti-ship and strike mission requirements with a single weapon.”

Meanwhile in the UK, the RN will have to do without any Anti-ship missiles for at least the next 10 years in which to save money. Way to go MOD.

What an absolute criminal move by HMG!! Fallon keeps harping on about the 178Bn equipment budget but there is no money for ASMs? Insane!

I think there is the money for AShM but its going into the joint Anglo French Perseus project. The situation looks to me like an action replay of the Sea Skua to Sea Venom transition.ie. Do not buy a tactical solution, rather risk a capability gap while a multi-national project delivers the strategic choice.

Ah, Farouk. Your back and still getting it wrong. You asked me to respond to your tirade a couple of days ago and I did but you didn’t come back to me. Did you not like the facts? Any of you who are interested might like to look up the exchange on “Royal Navy may have ……
Despite the newspapers who some people just want to believe providing it’s bad news the ROYAL NAVY as of last night lists only three of it’s destroyers and frigates as inactive!

I’m sorry Farouk. Whilst yor reply is very full you are still either ignoring what I said or picking the bits from newspapers that fit your case. The comment about “ceptor” units is fact; mine hunters my response was from the navy; the first of the type 31’s is scheduled for 2023; and on we go.

Morning Geoffrey,
Rather than continue to argue my pitch is better than yours, lets just agree to disagree. On that note, have a lovely day, as I go into the kitchen in which to make another cup of coffee. Hope to discuss another subject soon.

The Harpoon missile system will remain in service for an extended period while a decision is made on it’s replacement.

That’s just rubbish, TH, and you know it.

And there are those so blind they belive every bit of information in the interenet without verifying it.

” growth in anti ship missiles forecast especially in Russia, North Korea, Iran and China. Meanwhile in the UK….oh there seems to be a recession of strategic planning and an absence of common sense”…just daft. Bordering on criminal negligence.

I know the US would hate it, but maybe we should considering approaching China or even Russia about buying some missiles, anything has to be better than nothing which is rapidly becoming the current option.

Japan must also be considered, their latest missile, XSSM has just gone to sea on a destroyer, presumably for trials, and is mach 2.5, 150km+ range, and also comes in an air launched variant – just what the doctor ordered! Given the recently announced deal on defence cooperation, and the fact that they are already collaborating on a version of the Meteor AAM, then a reciprocal arrangement for the XSSM could bear fruit. This would obviate the need for any future Anglo-French missile, and would negate the requirement for an ‘interim’ solution.

Steve, that’s a nice piece of kit and it really has scared the Chinese.
Mach 3+
Stealth

Farouk,
Yours of 10.21am. I’ve been out, so just spotted.
Fair enough, and credit to you for winding it down. I was getting decided irritated and I’m sure you must have been the same. At least we care.
I like mine strong…no sugar!

I read the very interesting counter to this https://thinpinstripedline.blogspot.co.uk/2017/09/no-royal-navy-is-not-global-laughing.html Whilst mostly true, we kinda shoot ourselves in the foot at times. The problem the RN kinda has it is over stretched with standing duties. Unlike most navies, the RN is deployed all over the world and being stretched so widely leaves some glaring gaps, such as what regulary happens when we have no ships to meet certain roles or we send inappropriate vessels for the roles. If the RN was to stop stretching itself so widely and mirrored other nato members, it would suddenly look way more poweful. Cosmetics i… Read more »

Do you ever get tired copy and pasting the same rubbish over and over again on every article?

TH
Just because its in the Daily Telgraph doesnt mean it’s true – in fact the RN is held in very high regard by many other Navies, hence the regular foreign participation in FOST, which even the USA values! As for ‘warships out of action’ go to http://twitter.com/haynesdeborah which contains details of current escort tasking and availability, and shows no resemblance to the Telegraph rubbish. When other activities are factored in – assault ships to the Caribbean, Albion undergoing post refit trials, commissioning of QE ongoing, submarine deployments and deterrent patrols, etc, etc then the RN actually looks pretty busy!

I I forecast that their will be a terminal decline in the RNs anti ship missile capability.

Well, well! Good spot. Can the Type 23 and Type 45 systems support Harpoon Block II? Say 40 new missiles at around $2m each would come to $80m to allow 5 ships to sail each with 8 canisters loaded.

Richard,
if that is true then brilliant. Can we order in some batch 1Bs to fill out the ranks and equip all type 45s and type 31s or just buy Japanese stealth hypersonic missile.

Block II with mid-course correction (from your Wildcat) would be the way-to-go I think in case the target decoys the missile off course. Plus with Block II you get GPS guidance to attack littoral and land targets. What’s not to like?

Deferred to 2020, is a good short term decision.

But who originally signed off on the decision to get rid of them in 2018.

Those posters who defended the decision to scrap harpoon do you have anything to say about this decision? Which in your opinion to defer to 2020 must be a bad decision.

Except from Ist SL speech. ” We know it should be perfectly possible for the Type 31e frigate to operate a vertical lift unmanned air system alongside or perhaps even in place of a manned helicopter from the moment the first ship enters service from 2023. And as a precursor to this, we plan to work with our partners in the aerospace industry to demonstrate such a capability on a Type 23 frigate next year” I think Scan Eagle was a learning exercise for the RN. I read the above to mean the RN is going for something larger, say… Read more »

I will fess up. I did post defending the decision not to renew Harpoon IC on grounds of ROE, ease of decoying, value for money, likelyhood of use and probable availability of better options to disable a peer frigate over the horizon – Astute, air power and Wildcat/ Sea Venom. However, I accept that Sea Venom may not make it into service before the 2018 date and neither will F-35B nor Typhoon will have Spear 3 by that date ( I don’t think you can safely get close enough to a modern frigate to use Paveway IV). So a postponement… Read more »

I acknowledge your comment Paul and respect your position

The devil will be in the detail. If they extend GWS 60 it may be that the number of missiles at sea drops due to the LIFEX of components. So whilst they keep the system it may be that fewer ships actually sail around with missiles onboard or with a full outfit in place. This happened with Exocet many years ago…less and less canisters fitted to ships as its components expired past the sell by date. As to upgrades. You cannot buy off the shelf, bolt it on and sail around happy as Larry any more. As I have said… Read more »

oh no not the “tax payers alliance” retard

Missiles are getting better, while remaining relatively affordable. The UK abandoning anti-ship missiles is unique among the world’s navies. It is a decision that is well known around the world and is laughed at. The stupid thing is, AShM’s don’t cost a whole lot. Boeing have said they can upgrade Harpoons to their latest iteration (Block II+ER) which doubles the range of the existing missiles for the same price as the old ones cost. A mere £100m (The biscuit budget at BAE) would provide for a stockpile of 80 modern Harpoons. Enough to furnish the fleet. They could do it… Read more »