Merlin helicopters are expected to start ‘low-risk, simple flights’ from the carrier in Summer, before the ship arrives in Portsmouth for the first time. This was previously expected to be be in Spring.

These flights will be followed by flight trials in early 2018 according to Captain Kieran O’Brien, Merlin team leader for the Ministry of Defence.

Queen Elizabeth is due to start sea trials in Summer before her first deployment in 2021, followed by sister ship the Prince of Wales.

It was earlier stated that Merlins would start simple flight activities in March 2017 with first of class flight trials in early 2018, F-35s begin flying from the deck later that year for trials. 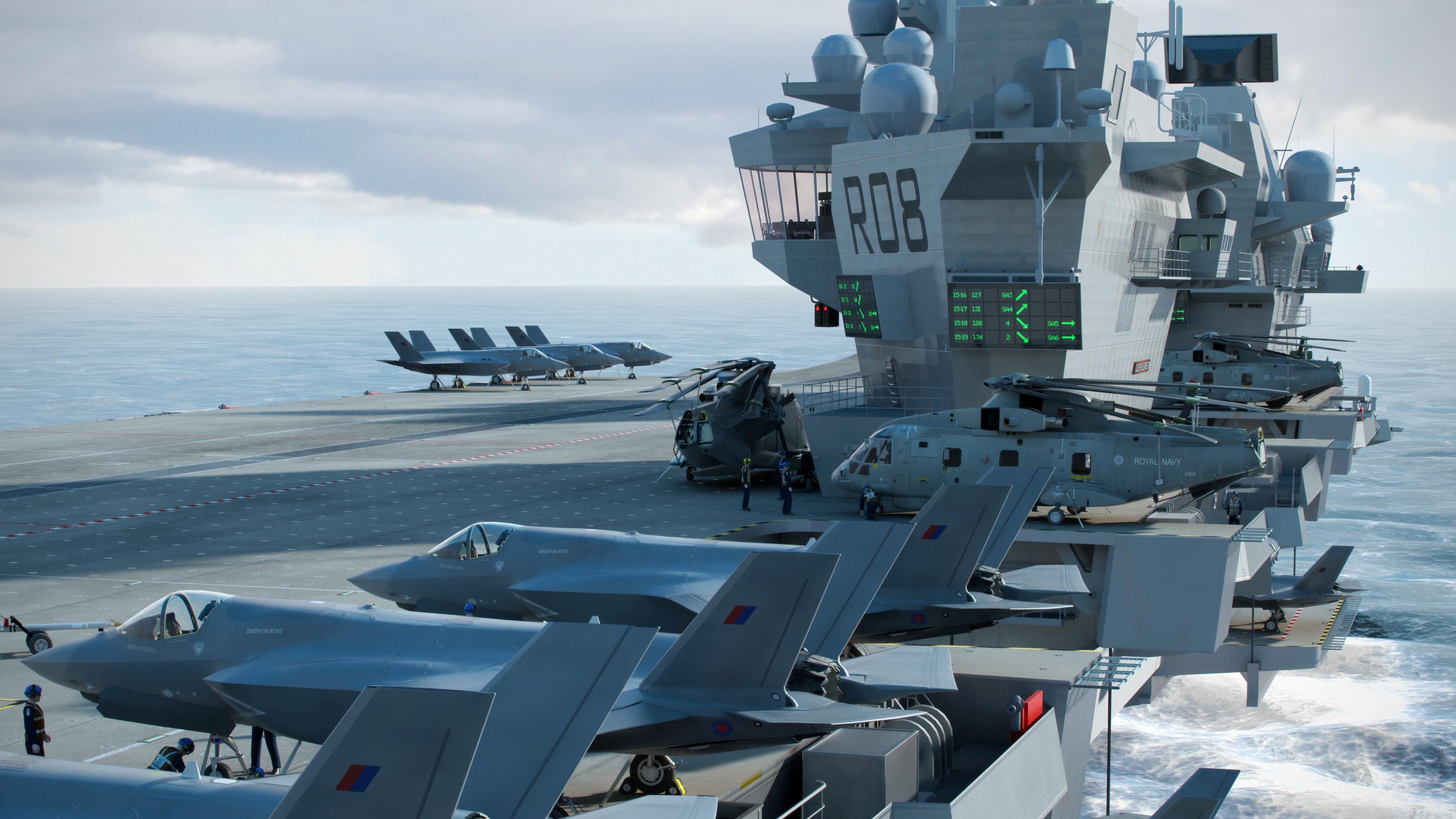 We understand that the composition of the CVW is a balance between ship capacity and squadron availability. Squadrons assigned or ‘programmed’ to sail on deployment will mostly in the case of the aircraft carrier be unique to it, for example the airborne early warning helicopters that have no other purpose but to serve the carrier force.

In addition, we have also been told by a senior source that we will shortly see decisions like this for the F-35B and “maybe a utility helicopter (or tilt-rotor in future) type”.

The source we spoke to told us that his expectation is that the vessels will sail with a larger number of F-35 than previously expected because “It is not that they can’t do land based operations, just that there is a need to get the return on investment for the well found forward deployed bases that these aircraft carriers that form the centre of the CSG are” and that “the capacity of the F-35B force in the near years in particular is very limited and it is unwise to do other deployments”.

We discussed this with retired Air Marshal Greg Bagwell who expressed doubt that the composition of the CVW would develop this way initially, referring to the idea of set numbers being assigned so far in advance he said:

There were some people moaning that the F35b would not be seen very often on the QEC because of resistance from the RAF.
This article counteracts that.
These ships will give the UK the flexibility in anti-submarine warfare, strike and littoral manoeuvre we haven’t had for a generation.

I agree that these great vessels will give the Royal Navy added flexibility, however the fact remains that we need more vessels. If we are to operate supercarriers they must have ample escorts and vessels available for other duties even if both carriers are operational. Improving conditions of service for our servicemen and women will create recruitment, they will come. Some people negative about our young people, but I think they have the same blood of the hard men who fought the battle of the atlantic. The Clyde has a proud history of buiding vessels for the Royal Navy but… Read more »

Well waddyaknow, the RAF guy pours cold water on the idea on large F-35B deployments on the carrier. Restricting the politicians choices my a*s. More like too far from the squadrons local. Go research how often and how many Harriers embarked on the Invincibles after the RAF took over responsibility. As for 42 UK F-35B’s, I see the author is very careful not to mention any date. At the moment 8 have been purchased. No more are on order. Any more than that has to be viewed in the recent news that the MoD has to make 6 billion in… Read more »

I have to say I really don’t recognise any of the situations you describe. You have a pop at the RAF guy for stating a fact that the F-35 will go wherever it is needed. Likewise to somehow blame the RAF for the number of Harriers deployed on a carrier hardly stands scrutiny as they do as they are commanded by the Chiefs. Did a Crab upset you somewhere in the past? Blame a lack of Sea Harrier IIs on Whitehall. Mind there are still 14 Sea Harriers at HMS Siskin (Culdrose) training Deck Handlers. You are wrong about the… Read more »