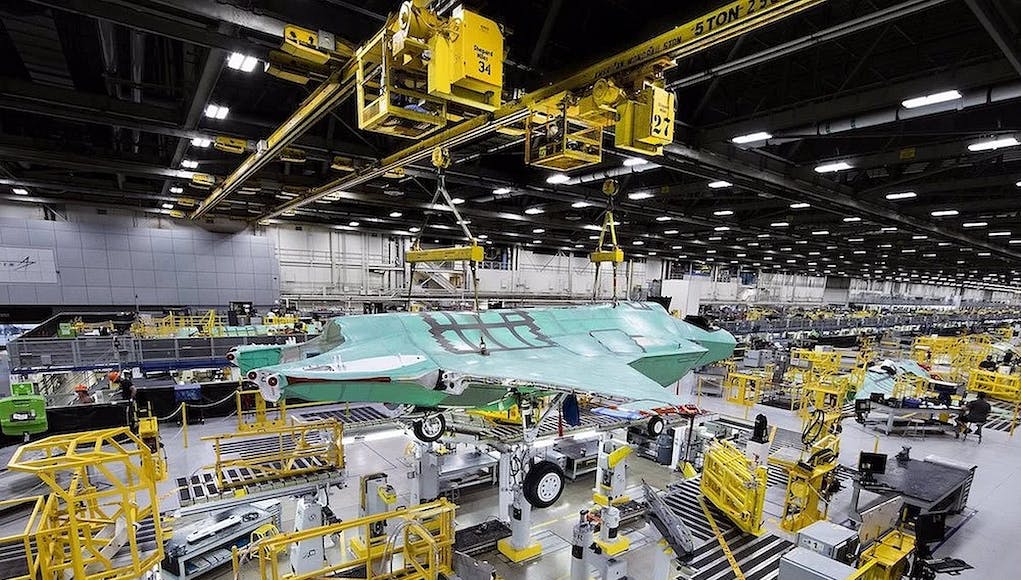 The first Lockheed Martin F-35 Lightning II for the Royal Danish Air Force is standing with weight on wheels for the first time, a significant milestone for the jet as it moves down the production line at Lockheed Martin’s mile-long assembly plant in Fort Worth, Texas.

Denmark’s first F-35, known as AP-1, was lifted by an overhead crane on September 15 from an electronic mate and alignment station where its forward and rear fuselage sections were joined to the wing-center fuselage assembly.

The aircraft will now travel to final assembly, where its control surfaces will be added, along with final systems and engine installation.

AP-1 is due to roll out of the factory in early 2021 and will initially be based at Luke AFB, Arizona, where they will be part of the training of Danish pilots.

The reception of the F-35 aircraft in the Air Force will be completed over a period of six years from 2021 to 2026.

On a similar note Israel has taken Delivery of its First F35I Adir.

The RAAF today took delivery of its 30th F35. By contrast with our completely hopeless procurement dept, by 2022 we might have enough F35’s to partially load up one of our oversized carriers.
138 planes were NEVER going to be delivered but the rate of delivery was put in place in the knowledge that a sufficient air group could not be deployed by the RN before at least 2022.
Let’s all blame covid. What a shambles.

The QE class carriers are the most efficient of their size.
Italy has only ordered 15 F-35Bs, because they don’t expect their smaller carrier to host more the a dozen aircraft.

The QE class can accomodate 40+ in addition to 6+specialist support aircraft; AEW, SAR, COB. If we were only going to deploy 12-24 max planes then we should have built 3 slightly bigger Invincible class type carriers deploying 12-15 F35’s but at a much more frequent procurement rate. We haven’t received a solitary plane for months while trained pilots are piling up. 60,000t behemoths are not necessary but here we are. I’m not quite getting the ‘efficiency’ of the QE class.

Hi Bill, I’ve often pondered that one myself – but the counter-argument is that steel is cheap, and more volume allows for greater growth potential during the fifty years’ projected lifespan of the carrier. Plus, through automation, although three times bigger, the QE class has the same crew-size as Invincible – about 650 sailors. On that basis, why not go big …… But the main reason for the large size is to drive a minimum number of required fast-jet sorties – 75 per day. See comments from Alan West below when First Sea Lord – “The reason that we have… Read more »

As I recall, the Invincible Class carriers struggled to deploy a squadron of Harriers, they were only ment to deploy a few Harriers to protect the ASW group from long range Soviet bombers.
So a bit bigger Invincible carrier would still struggle more so to deploy with a few F-35bs on deck, with it being a much bigger aircraft.

Procuring a significant number of aircraft now would lead to significant upgrade costs later on to upgrade to block 4 standard. Block 4 is the block which will see integration with the UK’s next generation weapon systems (Meteor, SPEAR 3, Brimstone, later FC/ASW etc.).

Not to mention we’d be paying higher prices per jet by procuring them before the prices are reduced, the more that are built.