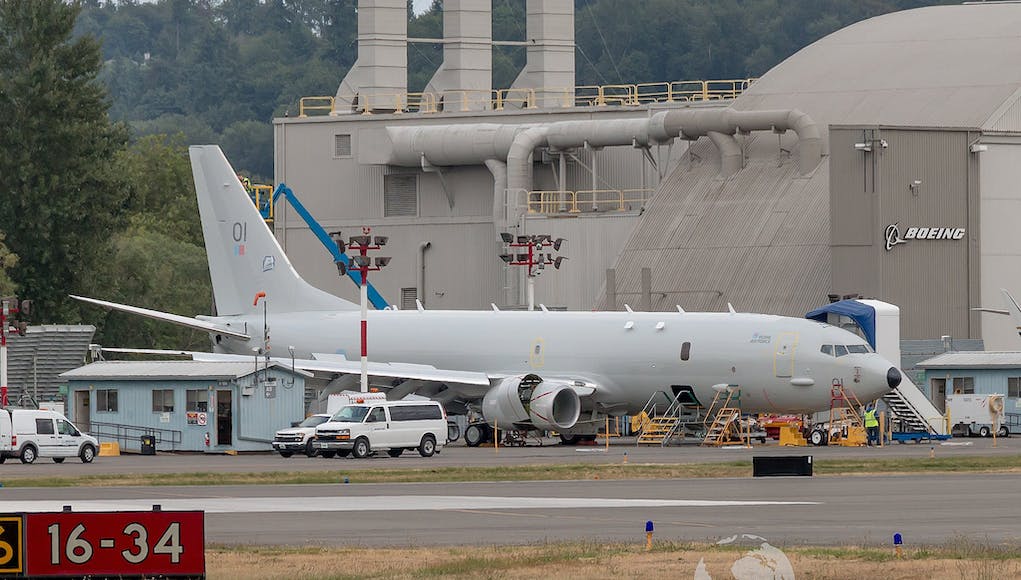 Images show the first British P-8 Poseidon painted and on the flight line undergoing pre-flight preparations for its first flight.

The 1st P-8 for @P8A_PoseidonRAF is now painted and on the flight line undergoing pre-flight preparations for its first flight. pic.twitter.com/PvvVVE7ht6

Recently we reported that aircrew have commenced the flying phase of training to fly the Poseidon MRA Mk1 (P-8A), the UK’s new maritime patrol aircraft.

The RAF say in a release that Pilots, Weapons System Officers and Weapons Systems Operators have entered the simulator and flying phase of their six-month course.

The personnel, from CXX Squadron at RAF Lossiemouth, are being trained by a mix of US Navy and RAF P-8A ‘seedcorn’ one-way exchange instructors on a course which covers a substantial range of topics.

In January, Boeing was awarded an almost $2.5 billion contract to produce 19 P-8A Poseidon maritime patrol aircraft for the US Navy, Norway and the United Kingdom.

Ten of the aircraft were for the US Navy, four for the UK and five for Norway.

The UK intends to procure 9 of the aircraft in total and had already ordered five. This purchase brought the total UK order of P-8A Poseidon Maritime Patrol Aircraft up to 9.

Fantastic kit but we need more of them

Seems fine if the US only ordered one more than us (or was that only their initial order?)

I think the USN will have over 30 Levi.

Only got a couple of years to order more before the production line starts winding up.

Janes, 24 June, is reporting that India is to order another 10 P-8i, so hopefully that will keep the production line open a little bit longer.

It would be more efficient to have a few MQ-4C Tritons patrolling and then focus the Poseidon operations on any contact made, or for specific observation (eg tracking a submarine)

I agree, like Australia we should get a few maritime surveillance drones. However, they will only be useful for surface contacts and not sub-surface, unless they can drop sonar buoys and have a MAD tail. One of the reasons Australia went for the Triton is that it has a massive flight duration, thus enabling it to keep track of shipping near their coastlines.
For us, a drone would do a similar job over the North Atlantic and North sea, probably too crowded for the southern approaches and channel areas.

Seems strange as I thought the USN favour probe and drogue, with USAF preferring the boom system.

The USN has never fitted its MPA with refueling probes before. The only reason that they are adding a boom receptacle is to aid transiting the P-8A globally to forward deployment bases a task that is better served by USAF/ANG tankers and that Boeing had already developed a standardised boom receptacle for late generation 737 and the USN didn’t have to stump up significant development or integration costs.

A good answer, thanks. Yet another aircraft the RAF can’t refuel themselves…

Shame this essential capability was needlessly absent for so many years:-

I agree with you HF – but based on some previous posts, you won’t find much support on this forum.

Will
Reply to  HF

That report, which I have read many times, is utterly damning of HMG.

I still find it difficult to believe any government could be so irresponsible.

After the events of the last decade, I don’t.

Apparently it can’t see ships either… and can’t do overseas patrol.

They’ve deliberately split T23 from Merlin to make it look worse that it really is/was.

Does the P8 have the Nimrods ability to shut down engines to conserve while in circuit
or its low level ability?

P-8A…twin engine aircraft…don’t think that they would want to do that?

Nimrod…based on the Comet, had an interesting advantage not shared by more modern jets. Its four engines were buried in the wing roots close to the fuselage. This meant that two engines could be shut down without experiencing the asymmetric effects that other aircraft were subject to. This made the aircraft unique, and with the RR/BMW engines it would have had a phenomenal range and loiter capability. Pity one didn’t fly up Cameron’s arse and save us from the years of shit that his stupid decisions have created!

So that’s why. Ta. As is evidenced I know B all about engines and aerodynamics.

What a pity the aircraft could not be built properly and produced massive time and cost overruns and still was not fit when cancelled… oh and costs cut because Brown ordered a raft of projects that left a black hole and were massively over budget.

The Nimrod should not have been ordered in the first place. And we are all still here, the Russians have not dropped the Bomb, we are still in NATO, you can still go to the supermarket and get your milk.

The real danger facing Britain is not counting up planes, it’s Jeremy Corbyn.

I’ve alerted Jezzer…expect a knock on your door soon!!!

They throttle the engine back rather then shut it down on the P-8A. To be honest with a modern engine like the CFM56 it isn’t as big a deal as with the Nimrod and four relatively thirsty RR Speys.

With delivery of the _P-8A the UK will have eventually finished the over 30 year process to replace the Nimrod MR2.

I do wonder how things would have gone if the USN had not cancelled the Lockheed P-7A in 1990 the type that the RAF had been planning to replace Nimrod with.

Oh. Thanks for that I was not aware of that aircraft.

Yes the Lockheed P-7A is basically an enlarged and enhanced P-3 with new wings, engines and avionics. It won the Long Range Air ASW-Capable Aircraft (LRAACA) contest against a Boeing 757 variant and a version the McDonnell MD-90. Ironically the updated P-7A looked very similar to the Societ IL-38 MPA. It was selected in 1988 with the UK agreeing to adopt it as well, two years later costs had ballooned and schedules pushed back leading to the US Defence Acquisition Board (DAB) cancelling it and the P-3C recieving an interim update instead. The cancellation of the P-7A directly led the… Read more »

It looks good, but a nice big Union Jack on the side would look better.

I only recall one of the white painted VC10s of the original 13 ordered having a Union Jack, by the door I think. And the BAE 146s.

Yeah and it looks dam good doesn’t it Daniele m8. Union jacks on all large british military hardware I say, And I like how some of the Merlins and Wildcats have big Union jacks on the side

At least one of the Voyagers (the one used for shuttling the PM and other dignitaries) has a Union Flag next to each of its doors. As Cam mentions below, some Merlins (particularly the pre-HC4 conversion), Wildcat and also Chinook have all used similar.

Hi folks hope are all well.
About time, this area of our excellent military was rather lacking in maritime protection. If I recall didn’t we have to call upon NATO allies to fill the gap during a search for Russian submarine activity a couple of years back? You experts can correct me on this.
Nonetheless, this is great news and one more advance in a positive for our military capabilities.
Cheers.
George

Yes George, it was reported at the time but details were scant obviously.
I recall the NATO MPA were deployed to Lossi.

What the U.S. Navy REALLY needs…

Lol Shackletons are great I love the look of them… shame we break up all our great aircraft.

Great a picture of backward tec – least capable option in terms of electronics, way less advanced than either the Scandinavian or Israeli offers and an expensive to run airframe. Seems like a rushed decision not the right one.

What???
The P-8 carries the slightly modernised Nimrod MRA.4 mission system.
If you think the Swedes or Israelis have any clue about deepwater ASW you’re absolutely bonkers..
This is the state of the art bar none.

Got a source for that at all?

In other news the QE is moored in Plymouth Sound,Yay!near Devonport you know the other Naval Base.