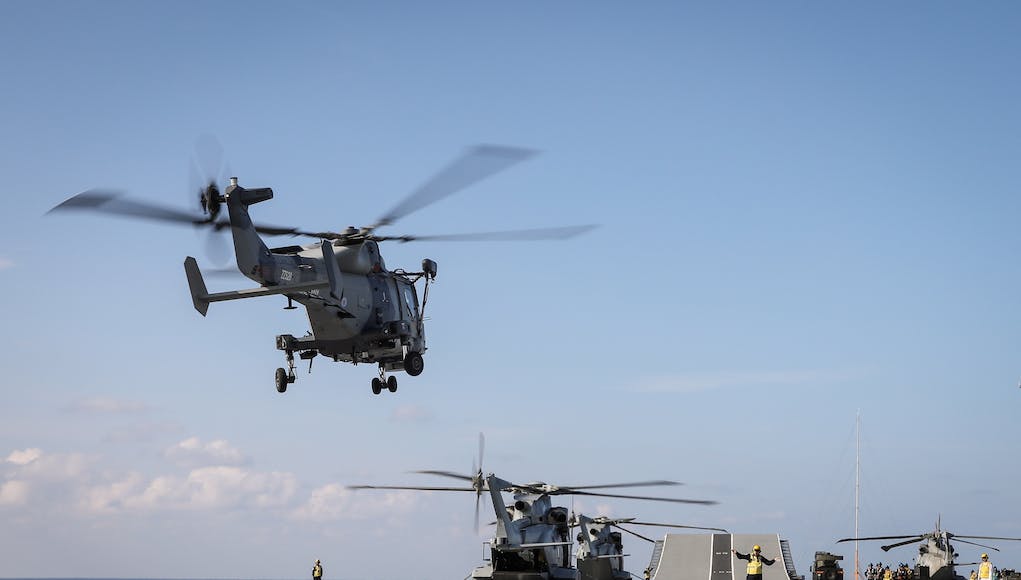 The first Wildcat helicopter landed on HMS Queen Elizabeth recently as the aircraft carrier heads to the United States for F-35 trials.

During her long transit across the Atlantic for ‘WESTLANT 18’, the carrier was cleared to embark call sign ‘Blackjack’ from 213 Flight, 815 Naval Air Squadron, based out of RNAS Yeovilton. The helicopter and crew are currently embarked in HMS Monmouth, the carrier’s escort.

The Ministry of Defence say this is another step in the incremental process to bring the carrier to full operational capability in 2020 and comes after Rotary Wing Trials conducted in January, which cleared Merlin and Chinook for landing on the 4.5 acre flight deck.

The Wildcat’s primary role on ‘WESTLANT 18’ is protection of the carrier. To do so the crew will use the helicopter’s long-range sensors to build and maintain the ‘surface picture,’ identify any aggressors and prosecute if necessary using the M3M machine gun, Stingray Torpedoes or Depth Charges.

Fittingly, the first passenger to land on the carrier in the Wildcat was the Commander of the Carrier Strike Group, Cdre Andrew Betton say the Royal Navy. He said:

“As a critical step towards delivering the UK’s new Carrier Strike Group, this deployment demonstrates the astonishing collaborative effort that will enable the new F-35 jets to fly routinely from our Queen Elizabeth class aircraft carriers.

At the heart of the Maritime Task Group, the aircraft carrier is well protected and sustained, ready to operate around the world as a potent and exceptionally flexible instrument of our foreign policy. These first F-35B embarked trials in a UK aircraft carrier are not only key to future operational success, but represent an iconic moment for the modern Royal Navy.”

The deployment, known as ‘WESTLANT 18’, is the first-time HMS Queen Elizabeth has sailed across the Atlantic. As well as the vital deck trials, the Royal Navy say it will also involve exercises to prove the ability to operate with other nations’ maritime and aviation assets, as well as the landing of Royal Marines and their equipment ashore in the United States, to conduct training with their US counterparts.

After speaking to one of the pilots in the test programme, I was informed that the UK only has three (BK1, 2 & 4) test jets that are “orange wired” to take data for post-flight analysis, the rest being operational aircraft. Therefore, it is highly likely that the jets to go on HMS Queen Elizabeth later this year will be “mostly, if not entirely, American but flown by UK pilots”.

The reason that most if not all of the aircraft to touch down will be American isn’t some scandalous outrage (just watch how some papers report this, though) but rather most of the F-35Bs in Joint Operational Test team are American. I was told by one of the UK pilots currently flying the jet that the reason for this is that the JOT team dictate the availability of test jets out of a pool. Our contact said:

“It would be nothing more than symbolic to make UK jets available for the trials and that comes at a significant effort since all of them are based at Edwards AFB in California, not on the East Coast where the ship trial is due to take place. Therefore, the most obvious and cheaper choice is to use the F-35B test jets based at Pax River, which are US ones. British test pilots like Andy Edgell, Nath Gray, will obviously fly them but there’ll be US pilots too because that’s how Joint Test works.”

Four F-35B Lightning developmental test pilots will embark to fly the aircraft; three British, one American. The British personnel comprise a Royal Navy Commander, a Squadron Leader from the Royal Air Force and one civilian test pilot. They will be joined by a Major from the US Marine Corps.

Any idea when they will actually head across the pond? According to Marinetraffic RFA Tiderace is still at anchor off Plymouth and I don’t suppose she’ll be leaving much after the rest.

expat
Reply to  Bloke down the pub

Can HMS QE be replenished by US assets? Would this also be part of the exercises?

Yes, RAS procedures and equipment are standardised within NATO

yes for some time nato has used a common connection nozzle on its hoses. the new nozzle fitted with a manual break off head which, if hit hard by a hammer or such, will crack, split, and shatter! giving instant release from the nozzle intake.

Nigel Collins
Reply to  Bloke down the pub

Not sure if this incident has delayed its departure to the US?
Some of the jet’s most complex and sensitive electronics are housed in its nose, including its APG-81 AESA radar and its Electro-Optical Targeting System (EOTS).

Lena Lopez, a spokeswoman for the 33rd Fighter Wing, told Military.com that an investigation into the incident “is just beginning.” Lopez did not specify a timeline when the Air Force may have an update into the incident.

Tiderace is indeed still in Plymouth.

I believe she is finishing up FOST, and will join the carrier soon.

I know Lee 1, I posted the article!

The reason for it was purely because one post mentioned “ALL F35’s” would be grounded for at least 30 days, hence the reason for the delay in sending the carrier over to the USA.

Because I would rather see the UK spend its money on future UK projects rather than waste it on projects that clearly don’t for the foreseeable future does not make me a bot!

There are two sides to every discussion.

Plus a lot of your comments are full of clear bias and disregard common sense.

Common sense would clearly dictate that the F35 is a waste of UK taxpayers money in any large amounts Lee 1, especially with so many negative posts from places like the DOD DOT&E, plus the Pentagon. Uncertainty around expenditure threatens to undermine the economic viability of the F-35, including the UK, which is buying 138 of the Marine Corps version for use on Royal Navy aircraft carriers. The UK MoD is reportedly happy with the overall performance of the aircraft – built to be stealthy and smart, the Joint Strike Fighter incorporates 8 million lines of code – but has… Read more »

A little research could save us more money than cheap comments. PARIS — Three-quarters of all the F-35 Joint Strike Fighters delivered to foreign customers until 2023 are obsolete and will require major retrofits before they can deliver their promised performance. An analysis of F-35 contracts awarded to date shows that fully 343 – or 74% — of the 460 export F-35s that Lockheed is to deliver until end 2024 will be in the current, obsolete Low-Rate Initial Production configuration. These 343 aircraft are limited both in terms of operational capabilities and of the weapons they can use. They are,… Read more »

The common sense comment refers to the fact that you harp on about the issues with F35 yet seem to ignore all the same issues experienced with every new cutting edge aircraft/ship/tank/missile… etc. The F35 is an astonishing platform with amazing capabilities.

DRS
Reply to  Bloke down the pub

They be somewhere in the Atlantic looking by the picture. If you look for HMS Monmouth it is showing out to sea south of U.K. somewhere tracking wise

Tiderace really is still in Plymouth, tied up to C buoy. Some fantastic pictures of her from RFAnostalgia.

As of now is QNLZ able to sink enemy surface ships or defend itself?

No phalanx on there so would presume same for any defensive measure.

only if you count stokers on the flight deck chucking spanners!

I thought Monmouth had had CAMM fitted but the video of her firing her 4.5″ don’t seem to show the mushroom farm….

Only info I can find on her armament still says Sea Wolf.

Shades/Rob – correct still Sea Wolf pending upgrade (if one is scheduled for it btw).

amazing that this trip wasn’t executed with a type 45. just one escort as well? joke. some battlegroup

(Chris H) rgr – we are not at war, there is no battle and the carrier isn’t even an operational asset and under trials. Given the Type 45 is an air defence asset what aircraft are you thinking will attack QE in international waters? Forgetting of course that QE has exceptional aerial radar plotting capabilities anyway.

Of course its a carrier with no aircraft and we should have embarked Nimrod ..

I rather doubt anyone will attack it while in the U.S. or off its coast.

… Nimrod and nuclear-powered Harrier Mark 2s. I really do not understand why some people can’t grasp the fact that this is a non-combatant vessel transiting friendly waters in peace time and as such is making no pretence at being a “battlegroup”. Does anyone seriously think that in the current climate Russia or some other country is going to dispatch long range bombers or an aircraft carrier to mount an air attack in the middle of the Atlantic to try and sink her? For surface or subsurface threats the North Atlantic is I assume quite well patrolled by US, UK… Read more »

we don’t have enough to form a battlegroup i’d imagine a uk cbg woulD consist of a tide class tanker a the rear, a type 26 behind the carrier, a 45 in front of the carrier and t23’s out on the wings, any gaps filled in by merlin/wildcats as ASW, PLUS OF COURSE AN ASTUTE. F 35’S ON CAP.
IN TIME MAYBE ANOTHER PAIR OF T31’S AND ANOTHER 26.BUT, WE’LL HAVE TO WAIT FOR ‘JOCK, WHERE’S MA SPANNA GUN TAE TO PULL HIS FINGERS OUT AND GET THEM T 26’S BUILT.

they can only send kuznetzov really, an astute would knock her out in quick time the f 35 should see off any bombers.

assuming a type 45 was available to accompany q.e across the atlantic, it would have been a good opportunity to work with a paam in close