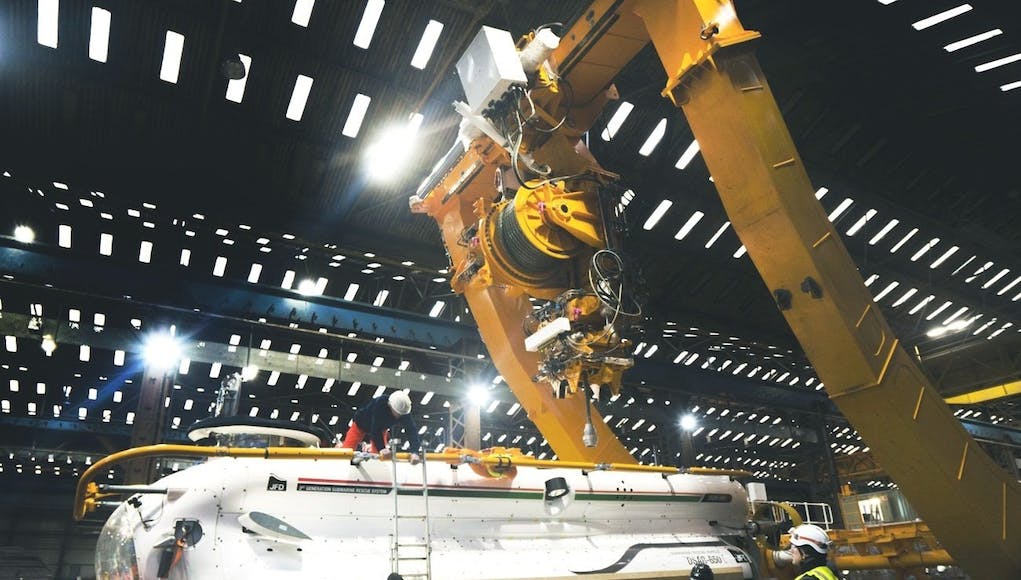 The system was designed and built at Caley’s facilities in Glasgow, and forms part of JFD’s 3rd Generation Submarine Rescue System.

The system will be officially presented to the Indian Navy at a ceremony in Renfrew on Friday, 23rd February 2018.

The system has been designed for the fast rescue of distressed submariners and can be mobilised in less than 24 hours onto suitable vessels.

“The Submarine Launch and Recovery System flies the international flag for Scottish engineering.  Its specially-designed features and technological advancements will allow the rapid rescue of submariners.  Given the recent tragic events, fast mobilisation timescales have never been more important.

The system integrates three decompression chambers and its flexible architecture means it can be mobilised on ships with different deck configurations.  The system is certified to operate in Sea State 6 – some of the harshest sea conditions.”

Caley has used virtual reality software to design and build the system and train the crew members from the Indian Navy.

“Using virtual reality software, we were able to verify the selection of every nut and bolt and see how different components work together.  We spent two weeks training the crew to operate and maintain the LARS equipment from our boardroom in Govan and will use it to provide continued through-life support.”

According to a press release, there are the technical specifics of the system:

The Caley Submarine Launch and Recovery System consists of:

You know what? Gerry Anderson was so ahead of his time.

This shows that even with all the doom and gloom going about at the moment we still have world class engineers in the UK that countries around the world pick to complete complex and important projects.

Yeah, but you know ‘what about Brexit?’ *peers into crystal ball that everyone but me seems to have*.