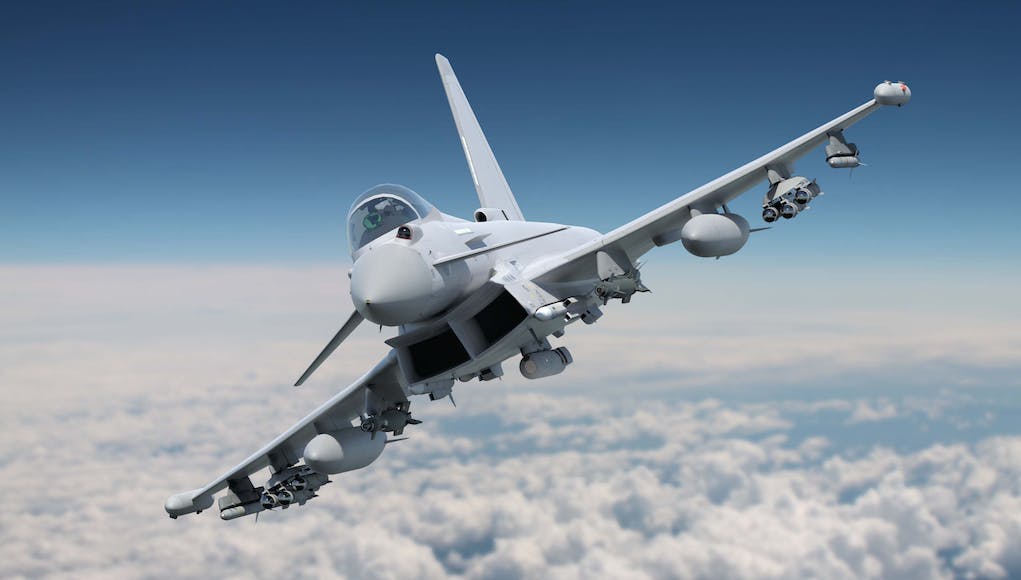 The UK Government has restated its commitment to the future development of Typhoon following the unveiling of a national Combat Air Strategy.

The strategy was revealed publicly at Farnborough International Airshow by the UK’s Secretary of State for Defence, Gavin Williamson MP. It describes how Eurofighter’s continued enhancement will act as a technology bridge to the development of a future combat aircraft programme and ensures Eurofighter will operate alongside future platforms in the decades to come.
The Minister’s statement came as several emerging technologies were demonstrated as part of a future concept aircraft revealed at the air show.
Industry leaders have previously described how Eurofighter will continue to operate as Europe’s “dominant fighter aircraft” and will develop and deploy the future technologies that will form a central pillar of a Future Combat Air System platform for Europe.
Air Commodore Linc Taylor, Senior Responsible Owner for the Eurofighter programme within the UK Ministry of Defence, said:
“Our ability to develop a next-generation combat air system must learn from, and spirally develop, the world-class systems that are already on Eurofighter Typhoon.
The Project CENTURION upgrades, which will enter service by December 2018, will see Eurofighter become one of the world’s foremost multi-role fighters with the Storm Shadow, Brimstone and Meteor weapons entering Royal Air Force service.
We plan to continue to develop the aircraft in an ever-more agile and responsive fashion; drawing on advanced sensors, including an electronically-scanned radar and advanced reprogramming techniques.”
Chris Boardman, Group Managing Director of BAE Systems Air, said:
“For a number of years we have been working with our partners, developing future combat air system technologies as part of our ongoing commitment to the UK’s continuing role as a leading international partner in air defence.
These technologies have been brought together today in a concept that considers our shared view on the future threat environment and likely international requirements. They will develop and deploy on Eurofighter before ultimately being incorporated onto a future combat air system.
This means that Eurofighter will remain at the forefront of technology. It also means that it will be the natural partner to work alongside a future fighter in the decades to follow its entry into service.”

I wonder if that means 1 or 2 planes will be upgraded or the whole tranche 2 & 3 Fleet?

I think there will be some upgrades that get rolled out to the fleet and others that remain on test aircraft. This could be because of failures or just testing a concept for Tempest. Yes, I used Tempest 😛

I do hope the continuing mods are applied to both Tranch 2 & 3? If only Tranch 3 get the ongoing upgrades that could lead to a smaller Typhoon fleet going forward. As we saw with the Tornado GR4 not all available airframes were included, and those that were left out were the first to face the axe.

Absolutely, we need both trashes to be upgraded in concert.

With a relatively small fleet of aircraft, we have to get away from the fleets within fleets system.

In the future, in a Gulf war 2 ‘type’ operation, a combined deployed force of 40 odd upgraded Typhoons and Carrier battle group of around 36 F35’s on one of the QE’s, we will have a tremendously capable deployable force at our disposal!

Not sure what this means for the other partners. Germany is with France on the new French fighter :). So if the UK works with Germany on new concepts to test on the Typhoon that will go eventually into the FCAS they be giving a future competitor a leg up. UK aircraft have been on a slightly different track but there has been common programs like the radar and meteor are we going to continue with all the partners? If Germany order more to replace their Tornados and they want to fund improvements will the UK participate or be allowed… Read more »

“We plan to continue to develop the aircraft in an ever-more agile and responsive fashion”
EJ 230 with thrust vectoring. There are more advantages to the inclusion of thrust vectoring than you might think!

Well, the Germans can fund their own upgrades to the aircraft, but it would be contractually obligated to share the software with Eurofighter partners to allow a common standard to be maintained across the international fleet.

For those asking how many typhoons will be upgraded I think it is normally a question of how much cash is available plus the material condition of the individual aircraft. Even though aircraft may have almost identical flying hours their material condition can often vary widely.

(Chris H) From the Tempest elation of a few days ago I am now worried. Is the RAF really now saying they will work with Airbus Germany to create advanced / enhanced systems on Typhoon that Airbus Germany can then migrate to the French Government influenced Dassault that builds Rafale? Upgrades that until a few weeks ago would have been kept unique to Typhoon? This is either fundamental stupidity or naivety of childlike proportions!! Will they never learn?? I am sorry if I offend anyone here but we must really start learning a new attitude – we must assume given… Read more »

I think the Captor E development has been pushed solely by the UK and probably would have been rolled out by now if it wasn’t for Germany refusing to provide any funding. From what I know its pretty much built my Leronardo in Scotland. If this does ever go ahead and Germany do not upgrade any of their Typhoons hopefully a lot of future electronic technology can be kept in house by Leonardo, BAE, Quintec etc.

In other words, some of the 2 billion budget for Tempest will be spent on Typhoon upgrades.

(Chris H) Ron5 – Yes and as I have advised you before that is precisely why Tempest will evolve rather than be a completely new design and why we have such a golden opportunity to deliver an outstanding new fighter quite quickly and at lower cost, However there should be a caveat IMHO given the new Airbus / Dassault deal and the fact that the rest of the Eurofighter consortium, indeed the majority shareholders, are now working on Tempest. We should absolutely be developing RAF and Italian Typhoons with new upgrades but those for other Air Forces. especially Spanish and… Read more »

Some Typhoon upgrades could help Tempest. Most will not. An upgraded Typhoon engine, for example, will not help at all.

As for an evolutionary 6th gen Tempest, basing that on a 1990’s Typhoon is a major stretch of your imagination.

Sadly we are always being shafted by the French in Aviation. Their recent ‘initiative’ is so typical.

(Chris H) Just found this on YouTube. Not sure the info. is accurate as it was never at RIAT Fairford and it was unveiled at Farnborough. If it was at Cosford I really do not know…

(Chris H) hellions – nice link but there are some errors in the report. I will just take one: “The industry team behind Tempest is the same as the UK’s Typhoon one” This is fundamentally wrong. Eurofighter GMBH is made up of BAE / Airbus / Leonardo. Team Tempest is BAE / Rolls Royce / Leonardo / MBDA. BAE and leonardo combined are the majority shareholders in Eurofighter GMBH. Given how Airbus have acted towards the UK and partnered with Dassault I doubt any development starting from BA or Leonardo will find its way into Typhoon. There will be no… Read more »

‘They will develop and deploy on Eurofighter before ultimately being incorporated onto a future combat air system’, that to me says Typhoon will indeed become more advanced. The question is – is it through the Eurofighter consortium, or are BAE/Leonardo going it alone on just our airframes? I would suggest that the engine, radar and cockpit tech is already out there, ready to use and will already be known by those in the consortium ie Airbus, thus allowing bleed through onto the French/german fighter. What we need to be sure of, is that all new tech is Tempest Team only… Read more »