A Royal Air Force Hawk jet declared an emergency at 10,300ft this afternoon.

The jet squawked code ‘7700’ just north of Leeds before landing at RAF Leeming.

The Open Source Intelligence Twitter account SkyWatcher Intel followed the event earlier and let us know what happened, if you don’t follow them then I’d suggest you go do that now.

The jet is believed to have been taking part in Exercise Crimson Warrior over the North Sea, the largest military exercise to be run by the Royal Air Force in the United Kingdom for over a decade has started.

The aircraft is on the ground safely.

Aircraft appears to be on the ground at RAF Leeming, hoping the crew are safe and well.

This is the 3rd article if this nature recently ( I think)

Is it happening more? Or just a case that UKDJ wasn’t reporting it before.

Hi. I replied yesterday, but this morning my comment has vanished ?‍♂️

Afternoon Daniele from a sweltering unpleasant 35 deg Durban. Some of my comments also disappeared a while back. There was no bad language or abuse therein so bit of a mystery? Nice livery on the above file pic!

Herewith pic of Sub and replenishment ship in Durban-Armed forces day. Hope it comes through- I am a Class One technophobe 🙂 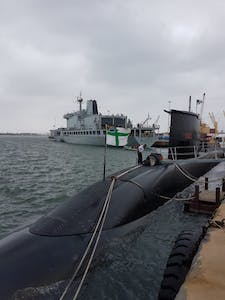 ps Note our White Ensign-as with many Commonwealth Ensigns, showing its heritage

God knows, I sent a perfectly polite comment about the regularity of emergency landings and state 2 emergencies, and that they are a none story. ?

A site like this might want to try different types of story to see which ones generate some interest. Saying something is a non-story might not be what the author wants. He/she will probably judge by the number of likes.

Is see what you mean, Emergencys such as these are something that has been very common for decades, and are routine, it’s just the information is available now to make a story out of. ?

Hi Daniele-my comment also vanished plus pic. if we are offending the moderator may we please know why? my last post was of current topic but still relevant in braod terms following up on the article about the Simonstown Agreement and the current state of the SA Navy

Agreed. Need to understand what the problem is here. This is going to discourage people from commenting – isn’t it?

It is George’s site and he does this for free. I’m just grateful for that and for having this site to discuss our shared interests.

If some comments vanish, oh well.

Hi Daniele and Mark. I think we are all on the same page here and I like you Daniele appreciate what George and team have created and allowed us to participate in, but if posts are disappearing seemingly randomly it interferes with the continuity of the discussion and surely also the value of the article, so it would be in everyones interests including UKDJ to understand why this is happening. Regards

I agree 100%. UKDJ has built a community here. Hopefully this is just a blip. I will make a conscious effort to to make a positive contribution as (i hope) i was doing before and let’s see what happens.

“The jet is believed to have been taking part in Exercise Crimson Warrior over the North Sea, the largest military exercise to be run by the Royal Air Force in the United Kingdom for over a decade has started.”

i love the patronising “if you don’t follow them then I’d suggest you go do that now.” Yes sir……who would have thought it was a hobby/interest rather than profession!