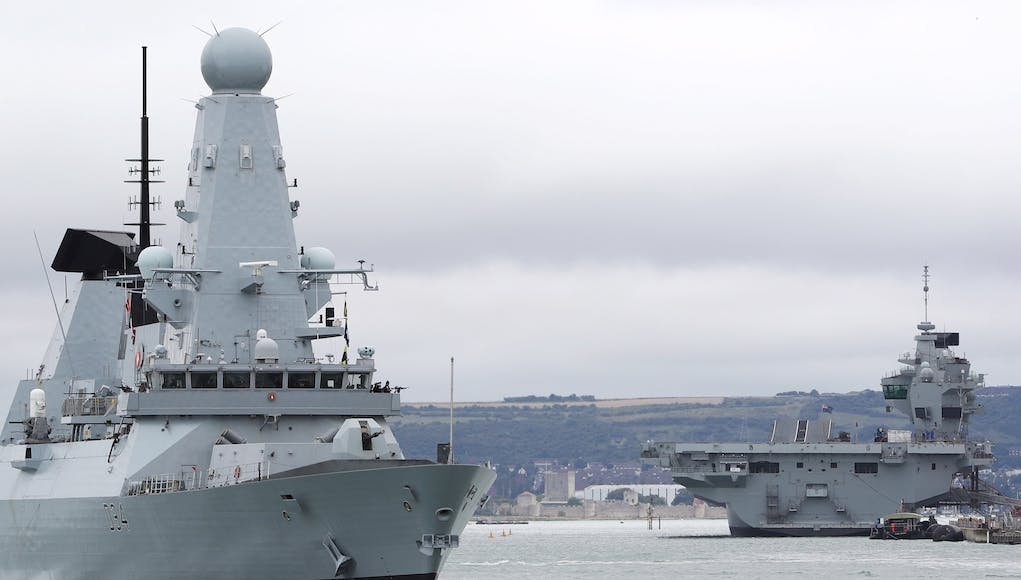 Destroyer HMS Diamond has sailed from Portsmouth Naval Base for a nine-month operational deployment.

She will be taking over the Navy’s long-standing commitment to the region from HMS Monmouth, a Type 23 frigate based in Plymouth.

She is the second Type 45 destroyer to sail on operational deployment in the last three months. HMS Duncan sailed in July to take command of a NATO maritime task group in the Mediterranean – a multi-national force that operates on counter-migration, diplomatic port visits and ensures a presence in the Black Sea.

Her sister ship HMS Diamond has sailed for the warmer waters of the Gulf where she will be working with international and NATO allies to protect some of the world’s busiest shipping lanes, keeping them free from criminal activities.

“Morale is high on the ship at the moment, we have quite a large contingent of young sailors on board who have not previously deployed so there is a real sense of excitement. We have trained and practised for a long time now to prepare for our deployment to the Gulf so we are ready to take on any tasking that is required of us.

This is a highly versatile and capable warship so we will be undertaking a variety of roles once we deploy. HMS Diamond will escort partners though some of the world’s hot spots such as the Bab el-Mandeb strait near Yemen, we will also undertake defence engagement activities and exercise with foreign navies and of course we remain ready to complete any warfighting duties should we be called upon.”

The destroyer left her home port to cheering crowds on the Round Tower and received a flypast from a Wildcat helicopter based with 815 Naval Air Squadron in Royal Naval Air Station Yeovilton.

“It is a really busy time for Portsmouth Naval Base and for the Portsmouth Flotilla at the moment.

We have just received HMS Queen Elizabeth, HMS Duncan sailed a few months ago and now HMS Diamond is deploying for a nine-month deployment in the Gulf.

And then there is a huge range of daily UK-based flotilla activity as well as the beginning of the preparations to receive our second carrier – HMS Prince of Wales.”

Do we have any more news about the fix for the power issue?

That was going to be my question, as I know warm waters are not sufficiently cold enough to cool the ships engineering systems. Diamond has been off the Isle of Wight for a week or so as I was monitoring the seas around Bournemouth anticipating the ship coming to our air display. Sadly the Royal Navy had no warships available, and sent just Argus which wasn’t open to the public. Typically, in addition to Agus, we usually have a Frigate, a River class or Minesweeper, and several University patrol boats. Even the platoon of marines and landing crafts were reduced… Read more »

Peter, I read on another site that Rolls Royce had been working on the problem with a shoreside model and had simulated 9-month deployments in Gulf conditions. Apparently, they have had good results in improving reliability and at least one Type 45 destroyer engine has been modified. Rolls Royce wouldn’t say which ship had been modified, but a big clue was that they said it was sailing for warmer waters later this year and would be a test bed that if successful would be rolled out across the fleet, so I think it may well be Diamond that was modified.

Thanks for the update.

So lets me get this straight, if the updated engine works then they do not need to go in for expensive refits?

No, they intent to upgrade the diesel engines as well as this roll out this fix. The goal is to have either power source – jet engine / diesel – capable of providing the full power needs of the ship for fail over purposes.

I suspect also it will provide extra capacity to upgrade to advanced weapons systems e.g. lasers.

My understanding is the Rolls Royce modifications on, I assume, Diamond improove reliability of what is already there, but the fitting of extra capacity will still have to be done, or at least that’s how I read it.

She will be taking over the Navy’s long-standing commitment to the region from HMS Monmouth, a Type 23 frigate based in Plymouth.
Have you got that correct as you said something that is alien to you guys
Are you sure you mean Plymouth?
Didn’t know you could spell that word

Typo. Must have meant ‘Portsmouth’ 🙂

T45 cooling is not an issue now. The recuperater ( Not the engines) was the issue and that is far more reliable . New control software and confidence in the system mean that the ships are now operating the IEP system as designed. So they are running on the GT Altenators most of the time , without issues and using the DGs very rarely. The last T45 in the Gulf had little if any issues with the GT or DG power systems onboard. They will still get new or additional DGs but that will allow the GT’s to be offline… Read more »