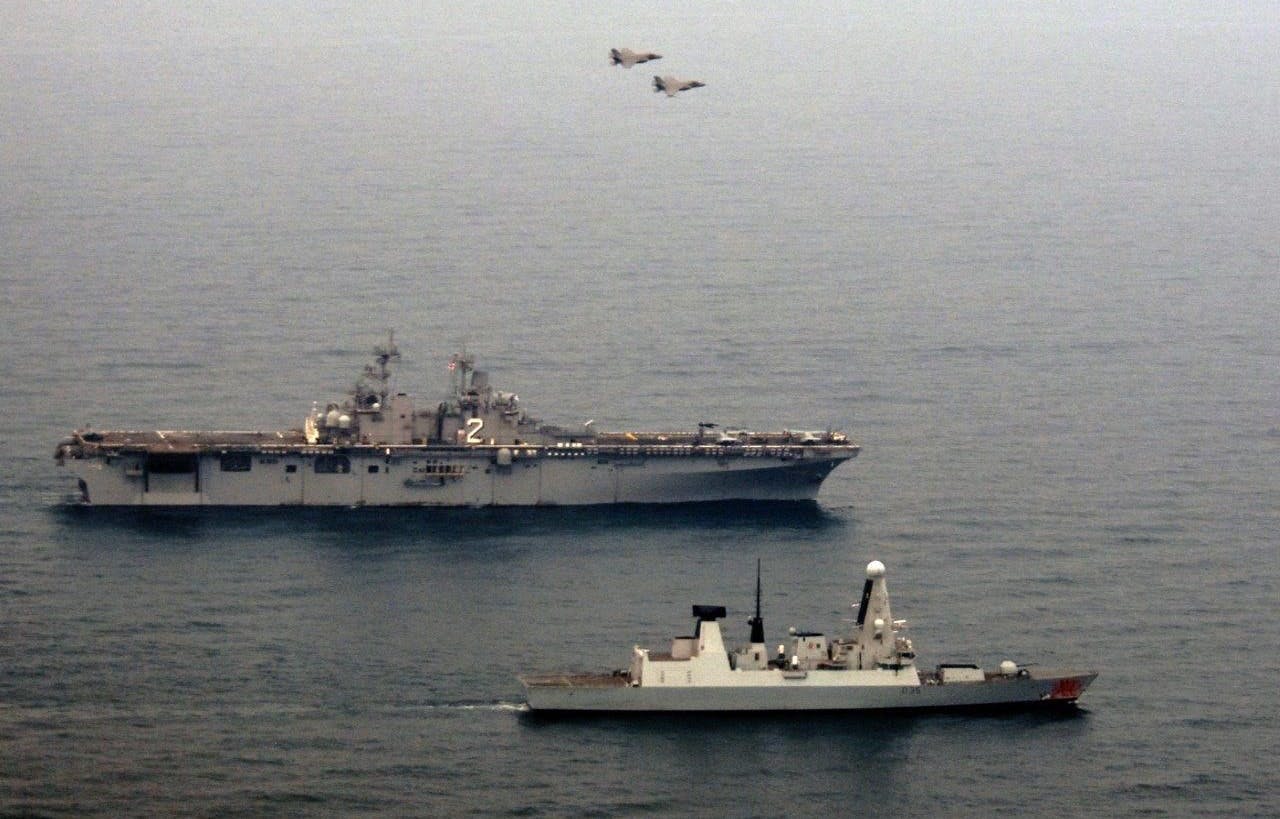 “Currently in the Gulf, Dragon welcomed the jets as part of her time working for the US Commander Task Force (CTF) 51/5 – providing air defence to USS Essex.”

“Having trained as a fighter controller, and controlled harrier jump jets while serving on board HMS Invincible, it has been a great honour to command HMS Dragon to provide air defence duties to our US Navy colleagues.

The step change in performance and range of roles the F-35s can provide is impressive, and to be able to work with these aircraft now in preparation for supporting the integration of the Queen Elizabeth-class, Type 45s and F-35s into the carrier strike group is exciting.”

HMS Dragon sailed from the UK in September and the MoD say that CTF 51/5 has been part of the British commitment to supporting operations in the Middle East as part of coalition efforts and ensuring the safety and security of the Gulf and wider Middle East.

For ships with engine issues the Type 45’s have successfully deployed in a wide range of conditions and parts of the world this year.
Superb assets.

I thought atleast a couple of Destroyers had a fix for the propulsion problems! I might be wrong. But I do know the Government did provide the funds to fix the type 45s….

Type 45s should have MADL fitted to maximise their capabilities when working with F35s.

Yes. T45 really is a HVU not an escort now. I would maximise its flag support capability. Systems like MADL should be a given.

HMS Defender is the first Type 45 to be fitted with the Shaman CESM. Important not to stand still.
https://www.janes.com/article/80634/first-uk-type-45-at-sea-with-shaman-cesm-fit

I wonder how Sampson fares in tracking F35… if at all?

Exactly! How retarded thinking the type 45 won’t be able to track a F35! When it can track a cricket ball moving faster!!.

Maybe he was asking a legitimate question in his mind mind, but you had to make such a demeaning and rude response, as too many do here, thus Rfn will think again about reading and commenting on this site, thanks to you. You acted like a Pig.

It’s a bizarre little site. A switch to Disqus would liven up the conversations and shut out the ne’er do wells. I picked somebody up for being rude here, and they just accused me of being rude back. If I were the site owners I would switch the comments off.

It’s a cricket ball not a golf ball and a spherical object is quite simple to track. The spherical symmetry makes for easy tracking and a strong return, in most cases 100% of the outward signal is returned. That’s why most radar calibration targets are spheres. Stealth platforms look to deflect those outward signals to reduce the return signal. You may find a cricket ball returns a stronger signal than a dedicated stealth platform. Retard.

No you won’t find that you retard. “Stealth” platforms have similar signal returns and radar cross sections as these everyday items they are compared with. Did I mention you’re a retard?

Ah yes, but not a stealthy cricket/golf ball! Important difference.

Actually, It’s a hypothetical Tennis Ball, No actual test was carried out !

I’d like to meet the bloke who can hit one at Mach 2!

Surely the issue is not ‘can it detect’ but ‘how easily can it detect’. Imagine a typhoon and an F35 both approaching the ship at height and from over the horizon. THe point of stealth on the F35 is surely that it will be able to get closer to the ship before returning a significant radar image. Hopefully close enough to fire off something that will make the ship’s day a whole lot worse.

Not really a realistic attack vector, the planes would be approaching the ship as close to the water as possible, to reduce the distance that they can be seen from and also attempt to blur into the radar noise given off by the water itself. Also the question is not just whether the ship can detect it and at what range, but also whether it can target and track the target. The falklands/iraq war1 showed that sea skimming is insanely difficult to track in real life conditions, and whether under those situations the stealth actually makes much difference is anyone’s… Read more »

I watched a short tour video of the type 45 the other day and they are seriously impressive designed ships. The only shortfall (other than the power issue) is that they are lightly armed for such an expensive asset. I really hope there is a serious midlife update. There are only 6 ships and money really needs to be found for TLAM, ABM and a 5 inch main gun. I did a bit of digging and the asw kit fitted to them seemed reasonably impressive seeing as it’s not it’s main role. I would hope that the 4.5 inch would… Read more »

MFS7000 is very limited compared with UMS 4110 CL sonar which it should have fitted (and is fitted to Horizon). MFS7000 is for dodging around mines and listening for torpedoes. T45 is the first UK destroyer (of the modern era) not to be fitted with proper ASW sensors. It was chopped to save money.

You should check the specifications of the RAN Hobart class.

You can be sure we are actively improving this capability!

“According to BAE Systems, Sampson features excellent detection of
stealth aircraft and missiles.”

I think we sometimes expect too much from platforms. The 45 was designed as a high end air area defence ship, the principle being to sit in the centre of the protective screen. This area is noiseywith regard to sub sea detection, hence any high end ASW equipment would be degraded. This was why the type 42 had a very limited ASW sensor fit. Optimum ASW detection by passive means is located outside of the protective zone, hence Astute, towed array frigates and Merlin operate in these areas. Therefore if the 45 where to be fitted with TA or additional… Read more »

Basil, I think we now have too few escorts to be able to rely upon a specialist AAW or ASW vessel to be available when needed. This is the age of the milti-role combat ship. I see the ASW capabilities of T45 and the AAW capabilities of T23 being upgraded to cover this situation.

And another thing, I do not think this is a suitable site to discuss tracking capabilities 45 v
f35. So if you do know something of the art I suggest you think twice about broadcasting to the world?

Lol, not sure the World Is Looking In here, just a few Dozen UKD Forum Regulars. Nobody else really gives a damn truth be known.

If you honestly think that such forums are not monitored by various security services you are deluded. It’s easy pickings for tit bits given by careless chatter.

Deluded you say, lol, I have yet to read anything here that They wouldn’t know already and anything unknown Is just Opinion and Guess work.

People are often confused about espionage, there is a common myth that the interest lies purely in facts and figures, this is not the case, the majority of which are available via marketing by the very companies selling the goods. The actual treasure lies in the operability of equipment, the interaction between the operator and equipment in question. Some years ago careless chat on a shipping enthusiastic website compromised the capability of a UK warship operating in a live environment, severely endangering the crew. At times there is a fine line between opinion and fact, the majority of opinion is… Read more »

Not Upset, Didn’t take any offence mate, I’m just a Sarky old bugger with a sense of humour and an unhealthy ability to type my opinions/comments ! It comes from feeling proud to be the Captain of HMS Armchair, one of the best armed Typing platforms ever to set sail on the WWW. ( BTW, have you heard about the Latest weapon we Brits are developing ? It’s top secret so don’t tell anyone, We have developed project BS, It’s designed to deflect incoming Hypersonic Missiles. Yes the “BS Deflector” has an astonishingly accurate success rate especially against untested or… Read more »

He got away with it. So did you… Best comedy ever in my opinion.

Reading the comments about the T45 or T45 vs F35 there seems to be some confusion. The T45 is a AAW escort. Its main task is to protect the carriers and Amphibious Warfare ships, in the Anti sub role it does not have a passive tail and its engines are not able to sprint and stop, they are not designed for that. Second issue the SAMPSON radar, believe me it is good in many case better then the American AEGIS, coupled that it will work together with the new crows nest, it should be even better as the F35 or… Read more »

“So for an extra 3-4 billion we would have two powerful carrier groups, two amphibious groups, two convoy escort groups and three independents, its not much for an island nation that depends on the sea, but its better than what we have now. I think”

We already have that pretty much with all the ships being built. “not much for an island nation”, yeah just a force that would not be beaten except with the use of tactical nukes… 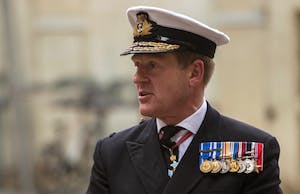