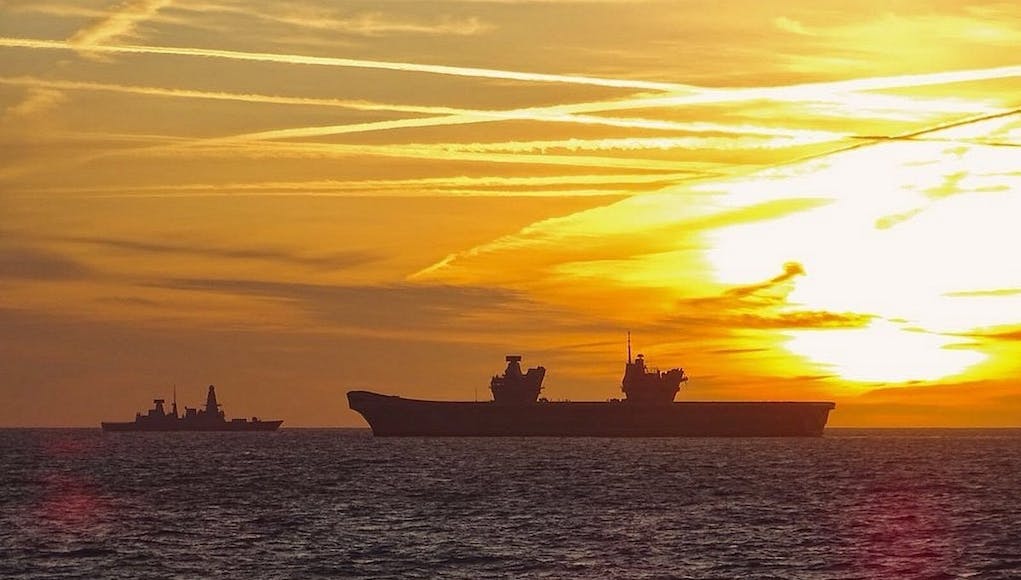 Supercarrier HMS Queen Elizabeth and Type 45 destroyer HMS Dragon have met up for the first time off the UK’s South Coast.

The aircraft carrier is on her second phase of sea trials while HMS Dragon is on her way back to her home port of Portsmouth following a series of exercises in Scotland and the South West.

According to her builders, this phase of sea trials will primarily test the ship’s sensors, which include the radar and communications systems.

During this period, the vessel also undertake further propulsion trials and conduct air flow pattern tests, which demonstrate how air across the flight deck will affect aircraft taking off and landing.

HMS Queen Elizabeth is expected to be at sea for the next month and will be delivered to the Royal Navy by the end of the year.

“We rendezvoused with HMS Queen Elizabeth at 0630 today to provide her with assistance during her sea trials.

“On completion we took the opportunity to take a picture of the first time a Type 45 destroyer and our new aircraft carrier have sailed together – the first time of many to come.

“It’s good to put that skill of making a close approach to the carrier into practice. All of the bridge team feel privileged to have been on the first Type 45 destroyer to have sailed with the nation’s future flagship.”

HMS Queen Elizabeth is expected to be at sea for at least a month while she tests her capability before being officially handed over to the Royal Navy by the end of the year.

HMS Dragon will return to Portsmouth Naval Base where she will go into a short period of maintenance before returning to operations in 2018 say the Royal Navy.

“HMS Dragon will return to Portsmouth Naval Base where she will go into a short period of maintenance before returning to operations in 2018 say the Royal Navy.” Is this the intercooler fix?

No. Routine maintence for 1 to 3 months after a 6 to 9 month deployment.

In isolation a full carrier strike group will be a worldie.

Based on one in three rule there won’t be much left for escort duty elsewhere mind.

Just wait until the Type 31’s come on stream. Or the Pacific 24 Premium as BAE like to call it

The 1 in 3 rule is a worry- 19 frigates and destroyers leaves circa 6-7 for frontline service- so just enough for 1 carrier strike group and limited other single ship deployments or cover for a smaller surface group.
That is it.
We need the type 26 order to go back up to 13
We need 5 type 31s asap and then another 5 ships delivered before 2030- otherwise we simply do not have enough warships to meet current commitments.
Anyone in HMG interested? doubt it….

I agree there are too few surface escorts and destroyers but I thought it was now 1 in 2 ?

Royal Navy reckon, with modern concept maintenance they can achieve forty five to fifty per cent availability. Maybe better with new ships but presumably when the faults are fixed e g. intercooler etc.

But it’s not just about maintance, the 1 in three rule accounts for working up, training rotation and getting to and from deployments.

“Enough” is a subjective term. We haven’t bad “enough” for years and now send oil tankers on operational patrols. The carrier strike group won’t be more than one escorts in peacetime, although even that might be unlikely. The Invincible class pretty much were solitary shis.
Not enough ships for 6 patrols, then we will do four. It will be as simple as that I’m guessing.

HMS Dragon has been out for 6/7 weeks following a summer of maintenance in Pompie..further update maint and training pending deployment in tge new year!

Does the carrier have any weapons, yet?

20mm Phalanx CIWS for last-ditch anti-air & anti-missile defense, 30mm plus miniguns & GPMGs for “asymmetric” threats. It’s been speculated that a SAM system might be installed in the future, likely the Sea Ceptor version of the CAMM.

These are the correct weapons but they are not fitted until next year after hand over to RN.

I hope you are right on Sea Ceptor – so far she’s the only carrier in the world without her own missile point defence which to me a gross dereliction of duty.

The last HMS PoW was sunk through air power. It feels like the height of arrogance to think we know better than every other navy in not installing SC or equivalent.

With SC being cold launch it’s also not exactly expensive to install a bunch of drainpipes somewhere providing that the design did allow for that contingency and there are the necessary cable runs to whatever location has (I really hope) been reserved for them. Admittedly calling them drainpipes is exaggerating somewhat but the soft launch ejection system is in the missile cannister itself and the tubes don’t have to handle venting any hot exhaust gas so there really isn’t much to them unless I’m missing something.

You are missing a lot. 1. Risk management for having explosives on board 2. Safety cases 3. Weapon system integration 4. Safe Fire arcs 5. FOD hazard 6. Safe fly lanes when a system is live and air ops are happening(High Threat/Wartime) 7. Shore support. 8.Training for the crew 9. Will you need extra crew to operate and maintain the things 10. If you need more crew where will they live ( Not a problem on a carrier but on a smaller ship any addition to capability may involve accommodation modifications) 11. Logistics support for on board spares 13. High… Read more »

She needs as many F35’s and Merlins as poss as soon as poss. That should take priority for now. Her and her sisters main and most important line of defence is their aircraft. If it gets to the point where point defence is needed it’s real squeeky bum time.

True she does need as many aircraft as possible – but re point defence, so what? It’s an irreplaceable £10b asset when loaded. Insanity / Hubris / Conceit / Arrogance – call it what you will not to enable.

I have been pondering over a question regarding the Carrier’s deck design, angle deck not withstanding. On carriers equipped with catapults there is a jet blast deflector which is raised and then drops after take off. This is used so that aircraft can be lined up behind the cat without fear of hot gas ingestion which could flame out or surge a jet engine. The QE class does not have this, therefore what would be the safe distance between F35 aircraft lined up for take off. Further, by using the deflector as a solid that the jet blast can react… Read more »

Our low numbers of T23 45 26 should concentrate on core role. Leave singleton deployments for around the world flag waving and pirate, drug hunting to lower end assets – River B2 and T31. As it stands the UK will be able to deploy a CBG of 1 Carrier, 2 T25, 2 T23 /26, 1 MARS, 1 SSN, with modern jets, ASW Helicopters, TLAM, RM detachment and other embarked helicopters. What other nations can do that? There is no longer the political will to spend so much more on defence that the UK can field the numbers it once did.… Read more »

I had always assumed there would need to be 2 RFA/MARS vessels, a tanker plus a solid support ship. Am I wrong there?

No I’m sure you are correct. Just guessed on my part. Maybe 1 FSS and 1 Tide or Wave.

Thanks. With the RFA seeming to be moving to more specialised roles with Tides being pure tankers I do suspect that an SSS will be required as well. MARS SSS and T31 are the two projects that I really wish HMG would get on with and given how long the stated requirement has been around (i.e. longer than the T31 idea) I find the delay on MARS SSS the most frustrating. Given the speed that the Tides were built at, and how long it’s going to be until QE is worked up with 24 planes available, first of class of… Read more »

Really cool. Maybe one day it will have aircraft that fly off it…

HMS Prince of Wales to return to sea May 2021