HMS Duncan will be operating in the Mediterranean Sea providing air defence to the French carrier FS Charles de Gaulle.

The deployment of HMS Duncan will take place as part of the French Carrier Strike Group deployment, Groupe Aéronaval (GAN) 19.

The Royal Navy say that HMS Duncan’s participation in GAN 19 will offer the Royal Navy ship crucial training in task group operations and aid the preparations for HMS Queen Elizabeth’s first operational deployment in 2021. After this part of her deployment, she will conduct other duties.

“Upon detaching from the FS Charles de Gaulle, HMS Duncan will resume NATO operations as required.”

“HMS Duncan has regenerated after a successful tour as NATO flagship on operations in 2018, as documented in the Channel 5 documentary Warship: Life at Sea, and is now ready to deploy as part of a multinational air defence task group in support of FS Charles de Gaulle.

This operation with the aircraft carrier is an ideal chance to demonstrate the prime role of HMS Duncan as one of the world’s most advanced destroyers. With HMS Queen Elizabeth almost ready for task group operations, this will be an excellent chance to prove the ability of the Type 45 as a carrier escort.”

Which 4 carry the system? Or have they all been removed?

An actual embarrassment and I’ve noticed a few t23 without them as well .surely enough missiles to go round

The photo at the top of the article is an older one of HMS Defender (as mentioned in the article) on a previous cruise with the French. Video shows that Duncan was equipped with Harpoon when she sailed.
As for T23’s and harpoon my guess would be that they don’t routinely sail with them in and around the UK and only fit them when they leave on deployment.

Daniele, as Chris notes, this is a library image.

Duncan sailed with her Harpoon fitted. In a way, I would worry if she hadn’t, as Dauntless is just coming out of refit, and Daring is being stripped for her engine change (meaning that, logically, the four systems could all be fitted to active ships).

Of course, we can all question why Defender (pictured above) wasn’t equipped with it, but this time I think us skeptics can rest a little easier.

Yup, it’s now a mixture of female and male.

Shhh! The Ruskies think they have it made with their ‘vomit’ weapon, pffft. Our ships can regenerate! And in this day and age, we might have to employ a bit of reverse psychology and start calling our ships ‘he’ seeing as though the BBCs new Timelord is in fact a woman.

Well, either way, it’ll still be full of seamen!

I wonder if a ship would have a funny five minutes on a wave and go gender neutral?

Do they refer to her as the time Lord?…
Not watched it.
PC rubbish would make her the new time Lady.
Not quite the same ring to it?..lol

I understand that you’re joking, but I’d like to reassure you that as a young person myself, there are about 5 youngsters who are the “snowflakes” who are offended on the behalf of other people. It seems like they dominate the internet to some, but they really don’t, fear not.

Most of it is media spin, daily mail, buzzfeed and lad bible are the worst, they put a story on Facebook that is bat shit crazy about people wanting to change the names of things or get things banned because they are sexist or whatever, this generates thousands of comments and shares underneath, that’s how they make a lot of their revenue trough advertisement. And when you research the story either it never happened at all or they are using one tweet with 2 likes as the basis for a headline like “now the loony left want to take this… Read more »

God bless zir and all who sail in zir…

I wonder what the next French Aircraft carrier will be like, nuclear? Bigger?, I can’t wait to see. I would go with cat and traps but use electric propulsion gas turbines. I’m surprised we never wanted to sell the French the Prince of Wales, or would they even want it if it was offered?, after the UK French Lancaster house treaties they could have had an agreement where we both nations had 1 carrier each and there was always one carrier available to use, to save money.

Cam – yes,by the time CDG is near to retirement I wonder if they will just dust off the drawings of PA2 or go for something completely different.

Yeah, it’s interesting to me.?

Maybe PoW has been built to be converted to CATOBAR/CTOL? The design was always supposed to suit the French too as they we’re thinking GT rather than nuclear after CdG. Not sure what the idea would be now though. I can see the FACS project failing as France decide they want a carrier capable aircraft (a la Typhoon). If you reverse the above argument for a carrier capable aircraft then it would be better for France to buy F35B, build a QE class and forge ahead with a Typhoon/Rafale replacement. If you think about it… it’s all a right mess.… Read more »

The design was never intended to suit the French, they joined at a later date after deciding that a second CDG class carrier was a poor choice. They always pushed nuclear and viewed returning to conventional propulsion as a “backwards step for French technology”, but for a time the practicality of modifying a QEC was seen as more important. Then the recession hit and the French could no longer afford a second carrier, so the debate over propulsion became moot.

Given it’s an AAW destroyer I hope it is sailing with some anti-ship missiles, you can’t sink an enemy aircraft carrier with anti-aircraft weapons ?

Though F35b will mean we can cross deck (deck coatings permitting) with more allied ships than if we had gone CTOL at times I do wonder if Rafale-m would have been a better option. A lot prettier than F35b for a start which must count for something! 🙂 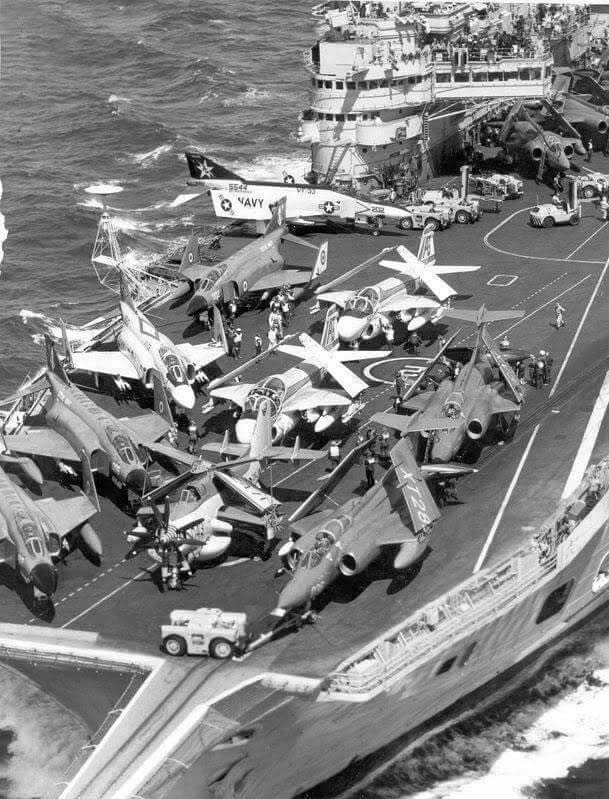 That should of been our air wing.

Rafale-M? Oh you mean the French Typhoon rip-off? ?
Personally I prefer the look of the F35, the Rafale is so last-century.

Ive never considered the Rafale to be a Typhoon rip-off,its just the result of differing requirements,for the French a Carrier Capable Fighter was always the priority,for the UK,Germany,Italy and Spain it wasn’t .Just look at the F35 Programme (and its huge costs ) to see what it takes to produce a credible Fighter Aircraft to suit the needs of many different customers.

I wonder what hull life was planned for with CDG? After all, she’s coming up 20 years old soon and age related issues will increasingly cause problems as she rolls into her third decade of sevice, steadily raising operating costs and reducing availability. As for the Franco German fighter, I doubt it will ever happen. It will be hamstring by French Carrier requirements , a French demanded common Marine optimised airframe, driving up costs and limiting aircraft size. Most importantly of all …. Germany will hamper and block sales to the very countries that France will want to sell it… Read more »