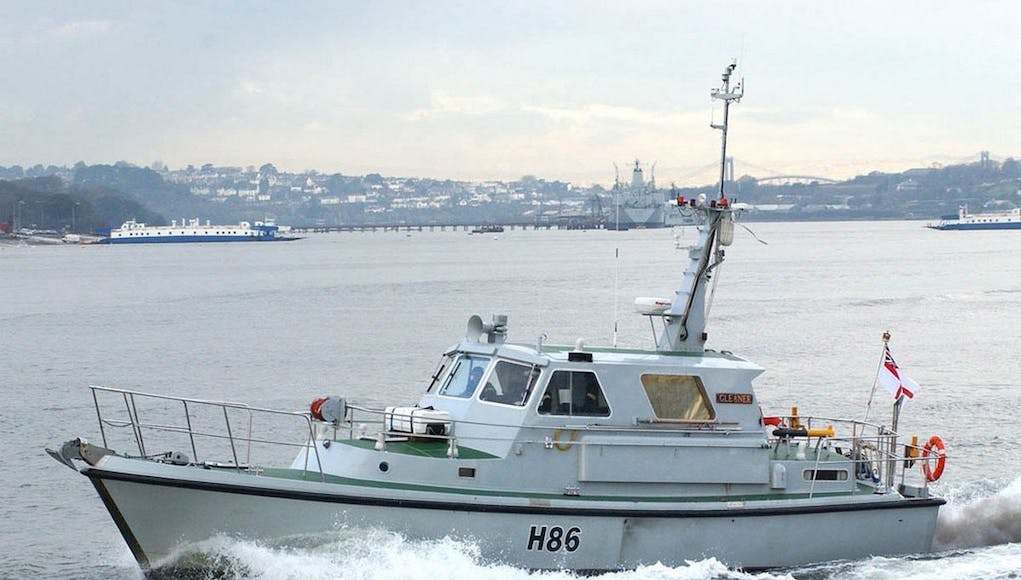 HMS Gleaner recently conducted survey operations in Portsmouth supporting HMS Queen Elizabeth as one of the final tasks of her career.

HMS Gleaner is the Royal Navy’s smallest commissioned vessel. The survey motor launch is an advanced survey vessel, using multi beam and sidescan sonar to collect data on the nature of the sea bed and the depth of water.

“Despite the wet weather, it was fantastic to be part of such an important tradition, and I’m really pleased to have had the opportunity.”

The replacement for HMS Gleaner has been confirmed as one of the series of new workboats announced last year in a £48 million contract.

Cork based shipyard Safehaven Marine will be constructing the vessel, the largest in the new workboat fleet, based off their proven Wildcat 60 design. These 18m catamarans have a loaded displacement around 37 tonnes with a capacity for up to twelve-crew to be berthed onboard, and an endurance of seven days. They are capable of deploying a range of sonar options and are all weather capable.

With an overall length of 18m the new vessel is larger than the existing Gleaner, currently the Royal Navy’s smallest commissioned vessel and will see that title pass onto the fast patrol boats HM Ships Scimitar and Sabre of the Gibraltar Squadron.

And why are they not constructed in the UK?

You really do get to appreciate the scale of the RNs demise when a story such as this makes the news. My Combat Support Boat wasn’t much smaller than the above

I am proud to have been aboard. I totally understand the sentiment that a replacement should have been UK built, taxpayers money after all, I am very sure bids were made. Its a big BUT though. We are actually the British Isles and that includes Ireland whether anyone likes it or not. The role of Gleaner and the new HMS Magpie is inland. That should include the Emerald Isle and the Red Hand of Ulster etc.. etc.. essentially its a boat for all of us. She’s replacing a hard worked one of a kind and God Bless her. Is Gleaner… Read more »