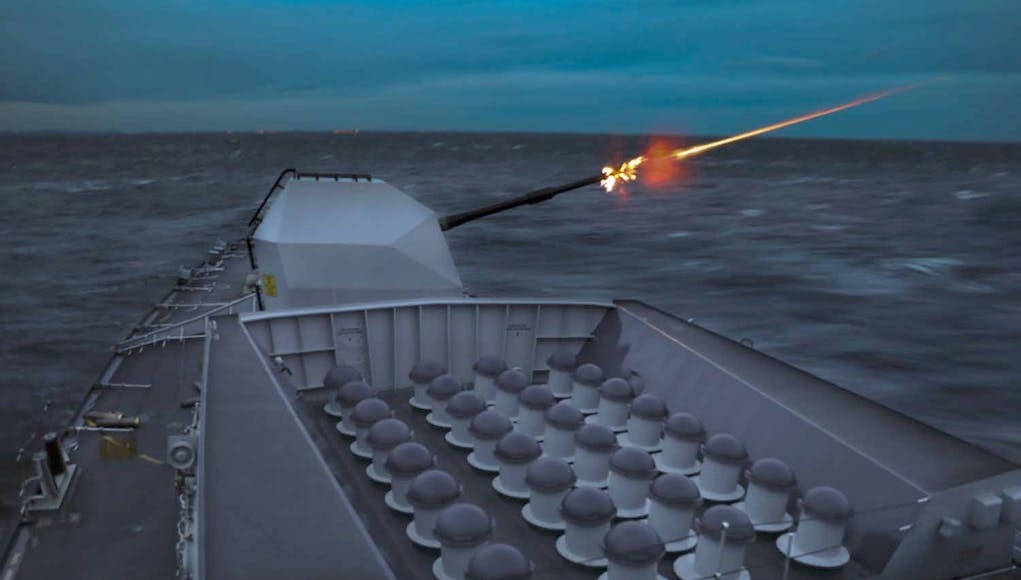 HMS Northumberland’s 4.5in main gun ‘lit up the sky’ in support of NATO troops ashore, say the MoD.

Responding to a number of fire missions requested by Viking, the call sign of the fire controller ashore, the Royal Navy say that 21 high explosive shells left the barrel at more than twice the speed of sound in salvos of up to five rounds at a time.

“The barrage was the Devonport warship’s most overt act yet after nine days’ participation in Trident Juncture 18, NATO’s largest exercise of the year – and the biggest war game hosted by Norway since the Cold War.

To date, Northumberland has been largely focused on practising anti-submarine warfare alongside her sister HMS Westminster, ‘protecting’ US assault ship USS Iwo Jima.”

However, as the task force approached the Norwegian coast, Northumberland broke away from the task group, sailed up to the ‘gunline’ in Frohavet Fjord under the cover of darkness, the Royal Navy add.

At 5.40am, the Principal Warfare Officer in Northumberland’s operations room gave the order: Four-five, engage.

And seconds later an hour-long bombardment of the ranges at Malorade was unleashed.

5 rounds at a time? But it lasted an hour the “barrage” and 21 high explosive rounds were fired! That amounts to allot of time in that hour not firing anything… Just saying.

I would presume this is all about assessing the impact of the various salvos then readjustment and repeat the process. Just banging in a load of extra Shells continuously, which surely is very WW2 not truly representative of modern conflicts and leaving a single overall assessment to the very end whereby there is only a theoretical learning process without a chance to respond would surely achieve less rather than more. Probably less stress on the equipment involved too in a non conflict situation.

Thats how calls for fire go some times especially in an exercise. Safety is always paramount so safety calls are always going to take a bit of time. The ashore controller calls the ranging shots, Adjusts fall of shot and then gives a “xxx rounds fire for effect”. He can then do shift targets or call a halt to NGS support whilst he looks for something else to flatten. It was a lot more entertaining to do a twin target shoot with illumination in support of attacking land forces. That could get really manic in the gunbay with the loading… Read more »

If T26 and T45 are indeed concentrated in the QEC group as 1SL has indicated in his Gallipoli speach and are unavailable then what will undertake NGS anyway? 5 T31?

What is the smallest hull you could fit a decent sized main gun on for NGS if we needed to expand in this area?

Why do you need a complex warship?

Half a dozen, little ferries, each carrying a few MLRS would do – left a bit, right a bit – woops there goes Oslo.

Yes reminds me of the rockets on D Day.

It is more a question of how small of a hull can we get away with to keep up with carrier group. This is why the Arrowhead design has advantages over the Leander design. A move to PGM would mean you might manage with few rounds anyway. Some of these ‘magic munitions’ have a longer range. If NGS was needed for a landing perhaps a T26 with its American gun could be detached to lob a few rounds into the landwards side of AOA. If they aren’t going to be used for that then I wouldn’t bother with a 5in… Read more »

I see NGS being used in Trident Juncture and Saif Sareea, and it has been used in Falklands and Libya in the past, but I do wonder just how practical it will be in a world of proliferating shore-to-ship ASM that will most likely out range conventional 4.5″ or 5″ ordnance, putting a ship at significant risk for dubious benefit. Moving to range-extended 5″ shells starts to drive up cost of rounds to the point of rapidly approaching some missiles depending on how esoteric the solution and may still not exceed shore based weapons. It also seems a reasonable question… Read more »

Frank62
Reply to  Glass Half Full

“Under the cover of darkness”- Night does not defeat or impinge on radar directed guns or anti ship missiles, nor armed drones or most aircraft. Night is always a great time to bombard to keep the enemy awake, wearing them down before an assault.

Funny how no other nation is removing ASMs from their escorts, while we seriously toy with a major capability gap risking the lives of our sailors, let alone the waste of our precious few warships.

The Brazilians have fitted a 4.5 MK8 on a small Inhauma Class corvette.

Needs to be strong enough to take the stress of firing too.

I remember Exeter’s deck was warped and twisted around the gun mount from hours on the gun line in the falklands.

Had 4.5 inch support off a type 45 on e once. Was utter shite. Our mortars were more effective