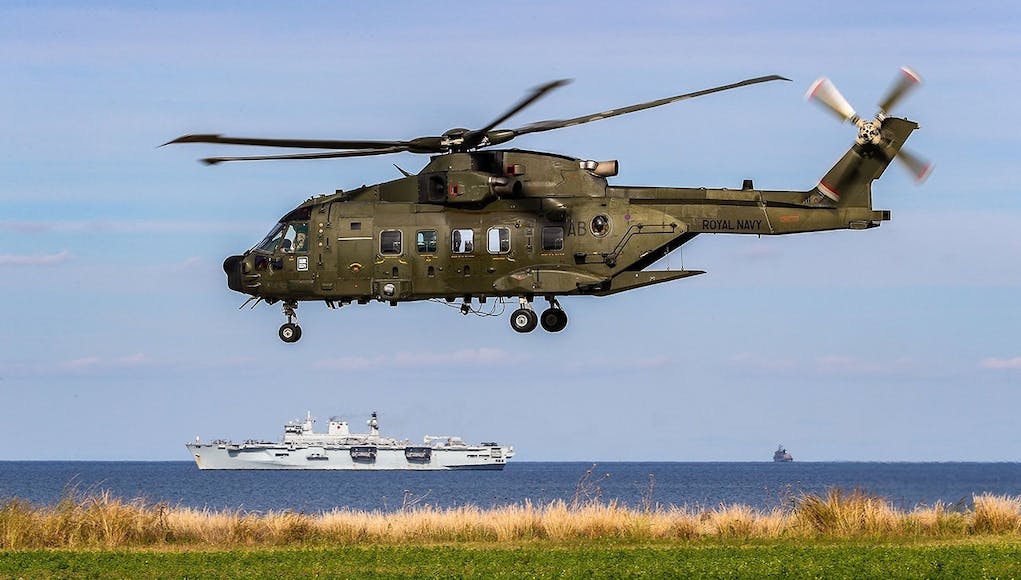 More than 20 ships and over 300 British, Greek and US Marines led by HMS Ocean, participated in storming Crete for the Greek Navy’s main autumn war games.

The Greeks host Exercise Niriis to test a sizeable international naval force and its ability to respond to a major crisis in the region – not unlike the Turkish exercise HMS Ocean and the NATO group she leads has just completed. The 2017 incarnation of Niriis involved ships/aircraft/personnel from Greece, Italy, Bulgaria, Israel, the USA and the UK say the Royal Navy.

As part of a fictitious UN force they had to conduct boarding operations, deter and interdict illegal activity at sea, building up to an amphibious assault which paved the way for a safe extraction of civilians from Cretan soil.”

Greek, Royal and US Marines were embedded in each other’s units as they carried out combined reconnaissance patrols and raids leading up to the final main effort.

“It’s meant a range of mission types from small-scale reconnaissance to simultaneous company raids and a unit level assault which really enhanced our ability to operate successfully with one another.”

find a replacement for the ocean pls pls pls.

Or better still do not scrap her until you have actually built a replacement lphd.
come on we can easily afford it. Stop sending £13 billion a year abroad in foreign aid.
£465 million last year to Pakistan, a nuclear armed country! Perhaps next year keep that £465 and build a lphd instead? Just an idea, Muppets in government and just daft incompetent decisions being made at the moment.