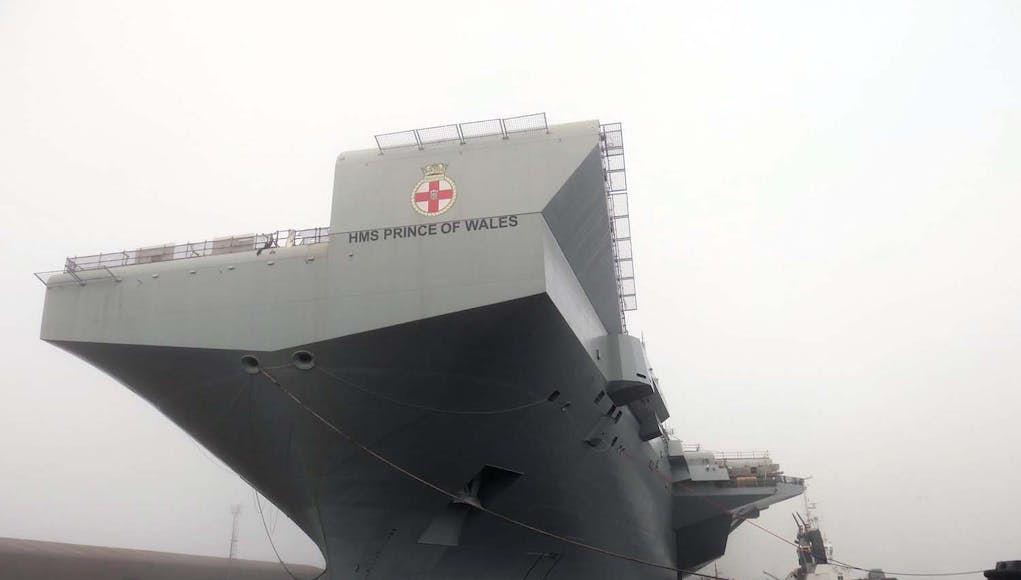 The Aircraft Carrier Alliance has successfully handed over the HMS Prince of Wales Navigation Bridge to the Royal Navy, a milestone originally planned for March 2019.

“In the spring of 2018, we took the decision to bring this milestone forward, and since then the production team lead by Harry McCluskey and Mike Ballantine have worked tirelessly with multiple trades to bring this compartment up to the standard required for CCI.

The Navigation Bridge is where the ship is commanded. When HMS Prince of Wales goes to sea, the bridge will be manned by the Ship’s Company and will include an Officer of the Watch aided by several Able Seaman acting as lookouts. The ship’s Commanding Officer, Captain Moorhouse and his Navigator will also be present on the bridge.”

The Aircraft Carrier Alliance say that the bridge was completed on time through collaborative work between multiple trades including, Babcock production, Balfour Beatty, Ticon, the Mission Systems IPT and Northrop Grumman Sperry Marine.

They also explain that the main challenge in completing the bridge is that the space is particularly complex with a variety of different systems in a relatively small space. The systems span the full technology spectrum, ranging from a basic compass through to the complex Integrated Navigation and Bridge System.

“Part of the task of getting to CCI was to complete the installation of the processors that reside within the Bridge consoles. The Mission System team led this activity, under the guidance of Chris Apted who, along with their supplier Northrop Grumman Sperry Marine, completed the installation in just four weeks.  On HMS Queen Elizabeth, this installation took three months, however, by allowing Harry’s team to mature the Bridge before starting installation work we improved performance, saving in monetary terms approximately £500,000.”

This is really good news, but what worries me is that the Aircraft Alliance has now developed in to a fantastic team of designers and engineers etc, but once the PoW is finished what then?

Unlikely Albion and Bulwark are quite new, they have 15 to 20 years life left in them.

RFA Argus would be a better bet to be replaced in that way, it’s nearly 40 years old.

They will be useful during the 31_and 26 build . Or like nutty Labour loons say can become nurses in the future .

To be fair, building and maintaining offshore wind turbines needs many of the same skills as shipbuilding.

Yes. But its less interesting as its far more repetitive and more like a production line. Big ships like the HMS QE you’ll have a different job each week I would say far more satisfying end result.

There are different types of Turbines and they are changing all the time. For instance we have just deployed the worlds first floating wind farm. Anyway, the argument was not about what is the most interesting, it was related to the skills involved. As a contractor, I work on various projects. Some are interesting, some or not but they all require my skills.

Lee. The problem is manufacturing of repetitive items is more likely to be a candidate for automation. I would rather see half as many defence jobs created with a focus on exports. I can’t see how 400k green jobs will benefit the UK. It’s more likely to push up energy prices impacting competitiveness.

The Green jobs are in all sorts of sectors. The point is that people complain about job being lost etc if we turn to green tech. However there are jobs in green tech to counter this. No one is saying that all ship workers will be moved to green tech companies! If we were banging out identical ship after identical ship for export then that too would become repetitive and prone to automation. In fact we would have to work out some level of automation in order to be competitive. This is how South Korea manages to build so many.

To be honest the defence budget should be 3% of GDP and we should build another aircraft carrier for reserve capacity but I guess that is pie in the sky. I wonder how much a third one would cost given that the team is now working in a highly co-ordinated way, the skills and there and we have reserve capacity in our naval yards. I know it is pie in the sky but would be interesting to know whether the cost of a third carrier would be significantly lower.

I think the 2 large ones we have is fine. However I would like to see maybe 1 or 2 smaller carriers designed with assault capabilities in mind (ie internal dock).

Built with international aid budget as they would be perfect for supporting humanitarian missions.

What’s wrong with the two amphibious assault ships we have??

Peter most people wonder what we will fill the ones we have with let alone ordering a third!

The 2 is fine and fantastic capability.

Now lets build numbers in the escort fleet and buy lots of T31, River 2 and other Corvettes to do the many constabulary tasks leaving our first line ships to form CBG.

Where are you going to get all the people to crew these fleets? And where is your time machine so they can cram in a quick 15 years of training and experience so the’re qualified to run this new Grand Fleet?

Are you seriously suggesting that HMG could not recruit 500 more sailors if it wanted to crew 5 or more B2 and 5 or more T31?

There are also the T23 crews, whom I believe are bigger complements than both those other vessels?

So rather than going on about time machines and “grand fleets”
( really?! ) perhaps join us here regularly on UKDJ MSR and make some positive suggestions of your own to enable the RN to protect its key assets rather than ridiculing mine?

I await your reply with interest.

Could there be some interest from the USA to build one or two here with EMALS?

Not unless they change the law in the US they can’t. Under US law, US ships are to be built in US shipyards.

The SNP won’t be happy about that. Another betrayal.

Has to be the funniest comment I’ve read on this site!

Bought for Military Sealift Command. They are a primarily civilian manned service under Naval authority.
They are allowed when facing a emergency shortfall to purchase surplus transports but not build foreign transports. Considering the MOD sold them for pennies MSC took the deal.

Nato should fund the build of a carrier/assault ships, each country crews it, all trained to exact standards, rotate crews as they did/do in the gulf.

Some trivia-Ironic that the Ship’s Crest for HMS PoWales is basically the St Georges Cross from the Flag of England whilst HMS Queen Elizabeth named after an English Queen has a Ship’s Crest in the Tudor colours from which the modern Welsh Flag is derived!
Thought you would like to know in case you had not noticed…

Does the RN put its ship’s through a shock trial? This article (though it strangely only shows older carriers in its pictures) has a good write-up about the GRFs imminent shock trials (bet the USN is going to turn Navy Blue holding its collective breath with fingers crossed when they occur).