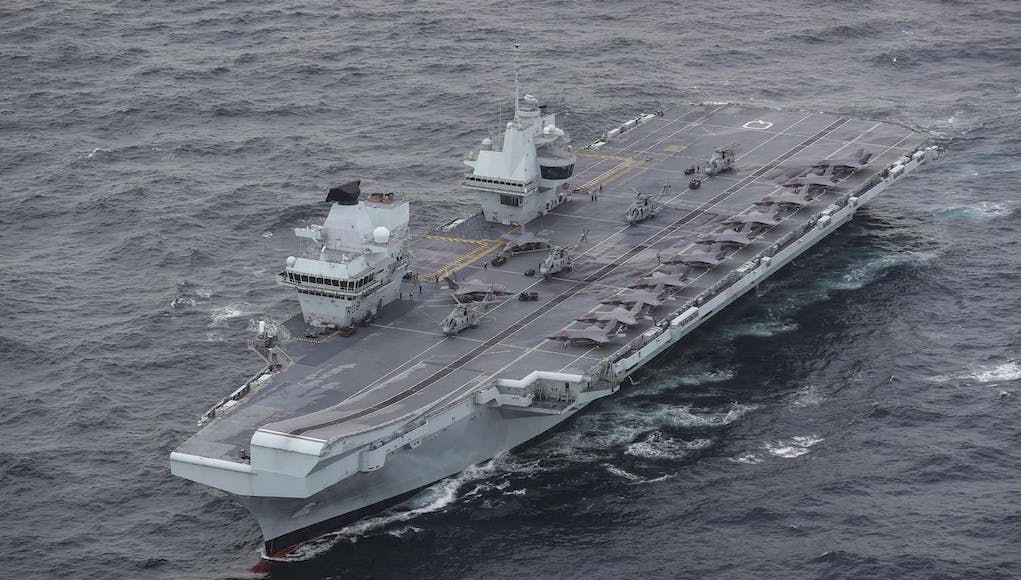 HMS Queen Elizabeth came under a simulated missile attack as part of a major exercise.

Hawk jets and other aircraft, some operated by Cobham, have been simulating air attacks against the Carrier Battle Group.

A similar event happened last month when French Rafale jets launched an assault against Royal Navy flagship HMS Albion as her task group passed the Brittany peninsula to allow French pilots to practise their anti-ship tactics and the Royal Navy to practice defending against air attack.

According to the Royal Navy in a news release at the time, Albion is leading the Littoral Response Group (Experimentation) deployment, comprising destroyer HMS Dragon, amphibious support ship RFA Lyme Bay and elements of 3 Commando Brigade.

“The ships are on a three-month deployment to the Mediterranean to test the concepts, equipment and practicalities of the Future Commando Force, as well as conducting traditional exercises and operations with NATO and other allies and partners in the region. Passing Brittany brought the group well within range of the Rafales, based at Landivisiau Naval Air Station near Brest when they’re not embarked as the striking power of France’s flagship, carrier FS Charles de Gaulle.

And lifting off from Lann-Bihoué air base on the outskirts of Lorient was an E-2 Hawkeye airborne early-warning and control aircraft, which spent a few hours looking for the naval group. When the Hawkeye’s crew located the shipping, they directed the Rafales in to make their attack runs, coming in with the sun at their backs – a classic fighter tactic. As the aircraft were detected, Albion’s Combined Operations Room burst into a flurry of controlled activity. Systems hummed and headsets buzzed as sailors responded to the growing threat.

In theory Dragon and her Sea Viper missiles should take out incoming jets – or any rockets they fire – at long range. Should that fail, the task group has numerous automated Phalanx Gatling guns which spew out a supposedly-impenetrable wall of lead up to around one kilometre from each ship, decoys and, as a last resort, hand-operated machine-guns and SA80 rifles. Both sides were able to test their attacking and defensive tactics and manoeuvres during the successive waves of raids.”

You can read more about the deployment of HMS Albion and her task group here.

Zippo calls all round and lots of whistle blowing from the Gollies.
You’ve got to love an ADEX 451 followed by a 323 beat’em up!
Even better if you overlay a DC Battle damage exercise onto it for the non ops room players..

Love the Lingo! But, I confess to not understanding a word of that!

Zippo Call is a posture adopted by the vessel that means a number of Standard Procedures come into force . There are Zippo calls for Active Homers. Anti Radiation missiles , IR homers etc. They govern radar transmitters on or off or chirping, chaff launching, decoys, course to sail to present your stealthiest profile, possible hard kill measures. Gollies are the EW set operators. If the EW set alarms with a known threat transmission from the threat library, be it a search or missile homing radar, the operator blows a Refs Whistle and screams out the threat radar/System and the… Read more »

Dear heavens…I can quite see why the military rely on acronyms! Your explanation is very much appreciated. As an academic, I am well used to ‘alternative language’ but this really does take the biscuit! The years I spent in the off-shore world ramify endlessly…its just that I need to remember the shit side of things and why I took the decision to leave. It’s a young man’s game or an older man’s sorrow!

“In theory Dragon and her Sea Viper missiles should take out incoming jets – or any rockets they fire – at long range. Should that fail, the task group has numerous automated Phalanx Gatling guns which spew out a supposedly-impenetrable wall of lead up to around one kilometre from each ship, decoys and, as a last resort, hand-operated machine-guns and SA80 rifles. Both sides were able to test their attacking and defensive tactics and manoeuvres during the successive waves of raids.” Seem to have missed out the Sea Ceptor umbrella from the two Type 23s? More likely you would use… Read more »

You can see how easily it would to be overwhelm a single ship and deplete its missiles. Working out how to reload at sea should be a priority for R&D work.

I thought the Royal Navy was capable of doing just that. Anyone feel free to correct me if I’m wrong.

You can do it. Raft up to an RFA in sheltered water and crane them on. I have done it with Exocet twice when we had it.
You where supposed to be able to do VL seawolf but it was a massive accident waiting to happen so it was binned.
Even the USN has decided to remove the ras crane from their MK 41 system. Its just to dangerous to do it and the chances of damaging the missile are to great.

To overwhelming 2 X T45 and 2 X T23s you would need a lot of launch platforms. Even something like a Kirov would struggle to get in range for a launch and still survive. Every allied sub in the Western world would want that silhouette painted on its conning tower when flying a Jolly Roger from a broomstick! For launch aircraft even carrying 2 X missiles each you would need 60 odd bombers plus search aircraft refuel tankers etc. And those aircraft would be also trying to survive long enough to launch. Kill the search aircraft or tankers and the… Read more »

HI Gunbuster! Love your insights from someone who’s obviously lived it. It really does give the rest of us a peek behind the scenes. My uncle served 35yrs in the RN and was active during the Falklands in 82. I loved hearing from him the reality behind what we read in the media (Phalanx CIWS for one, was something he didn’t hold in high regard at all). Sadly he passed away recently so hearing your accounts reminds me of those conversations I used to have with him. That said, do you feel the QE’s should have their own point defence… Read more »

I don’t think the Phalanx will do a whole lot myself but as you can see when on deployment the carrier will always have 2 T45 escorts and likely 2 additional escorts from the Netherlands, France, Germany or the US. You are talking at least 200 sams protecting her. There is just no point in launching one from the carrier and having to clear debris off the deck.

It’s just a question of what escorts would be available for an unplanned threat, where our allies might not be there to support us, either because they don’t want to be involved in the conflict or need their assets elsewhere.

For planned deployments, like this, its easy to ensure that enough vessels are available.

Overwhelming 4 platforms i agree would take some effort, although not that hard in the age of drones/decoys that could be launched at the same time as real missiles, although admittedly this type of tech is at drawing board level right now. However, what is the odds of us actually having that level of ships in range when needed. I suspect in a real war situation, our escorts would be massively stretched having to cover the carriers, landing force, supply chain, British waters, etc. The hope would be that we had allies around to help fill gaps and they were… Read more »

I understand the T23 could use quad packed Sea Ceptor if required. That would up the number of missiles availible.

SC on a T23 is literally a square peg in a round hole. The old round VL seawolf holes in the silo deck stayed as they where. To keep costs down to avoid a major reconstruction job and to ensure the new system was brought into service as quickly as posible they where reused to take SC. As the SC container is square an adaptor plate is used to allow the square SC cannister to sit in the round hole. Below decks the shock and anti vibration mounting of the missiles was also altered as its substantially different from the… Read more »

Slightly off topic, but nonetheless a very interesting development that might become relevant for carrier strike in the near future.

Now try it against the carrier and see what happens …

So the simulated missile attack is done by a Hawk T1 (speed Mach 0.84) when we are training to face Granit missiles (speed Mach 2.5).

Anyone notice the problem here?

Oh and the new Zircon missile (speed Mach 8 to 9).

Yes a noticed that.

The drills are deliberate and very procedural. Detect the shooters. Engage them. Detect the missiles engage them. It doesn’t really matter if its a hawk it’s the reactions you want. In reality and in a shooting war most systems are in Auto anyway as a man in the loop is to slow to conduct an engagement. Most systems have a man in the loop to stop the engagement not start it. For point defence systems like the old sea wolf system when in auto it could detect a target on radar, if it was a threat then it would allocate… Read more »

How does the phalanx avoid the other ships in the group when it’s operating? Is it designed to recognise any ships in the immediate area?

You can allocate no fire sectors to each mount. All of the mounts “talk” to each other and undertake threat evaluation so that the highest threat is taken by the mount with the best chance of dropping it.

You have a man in the loop who, when the system is in Auto can Check Fire but if another ship gets in the way whilst shooting at an air target… Tough!

Surface engagements such as swarm boats are a little different as the THIM is used a lot more than the radar.

In present i don’t know, but in the past no, There were several instances of Phalanx rounds getting on other companion ships while firing at targets. Phalanx rounds also do not self destruct i think

It was a problem since AA, often occurred into WW2 even with self destructing rounds.

A little something i read 3 years ago on the sorry state of the RN:

A number of things were cut from the original design including a lot of armor and defensive capabilities.

June 14, 2021
This episode covers the future of Afghanistan, the UK Carrier Strike Group deployment and a summary of stories from around the world.