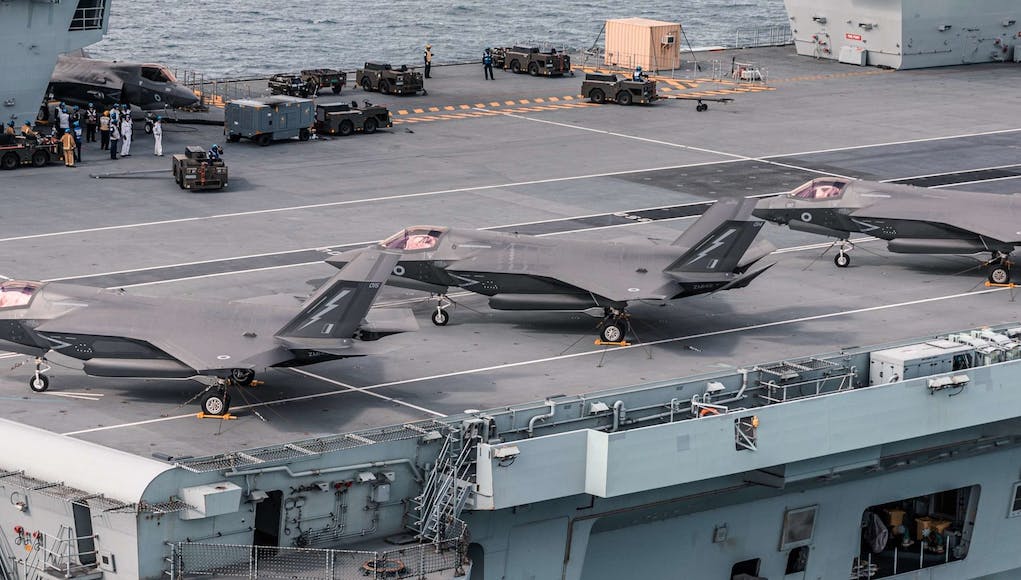 HMS Queen Elizabeth and her F-35 jets have been training for any and all eventualities related to carrier strike operations.

🚨Hostile Aircraft Inbound🚨#StrikeCarrier daily business as one of our pairs take off in Alert 5 Mode using the stream launch technique. #DoubleTrouble then practiced air combat dogfighting against #Typhoon and other #F35s.#TopGun? Yeah, but 🇬🇧 & better 👊🏻

HMS Queen Elizabeth and her aircraft were recently joined by frigate HMS Kent and a nuclear submarine while on Exercise Crimson Ocean.

Exercise Crimson Ocean is geared towards putting the carrier and her F-35s through their paces.

The exercise is part of a journey to enable the carrier, her aircraft and her escorts to deploy operationally next year. Next year, HMS Queen Elizabeth will deploy with two frigates, two destroyers, a nuclear submarine and support vessels. 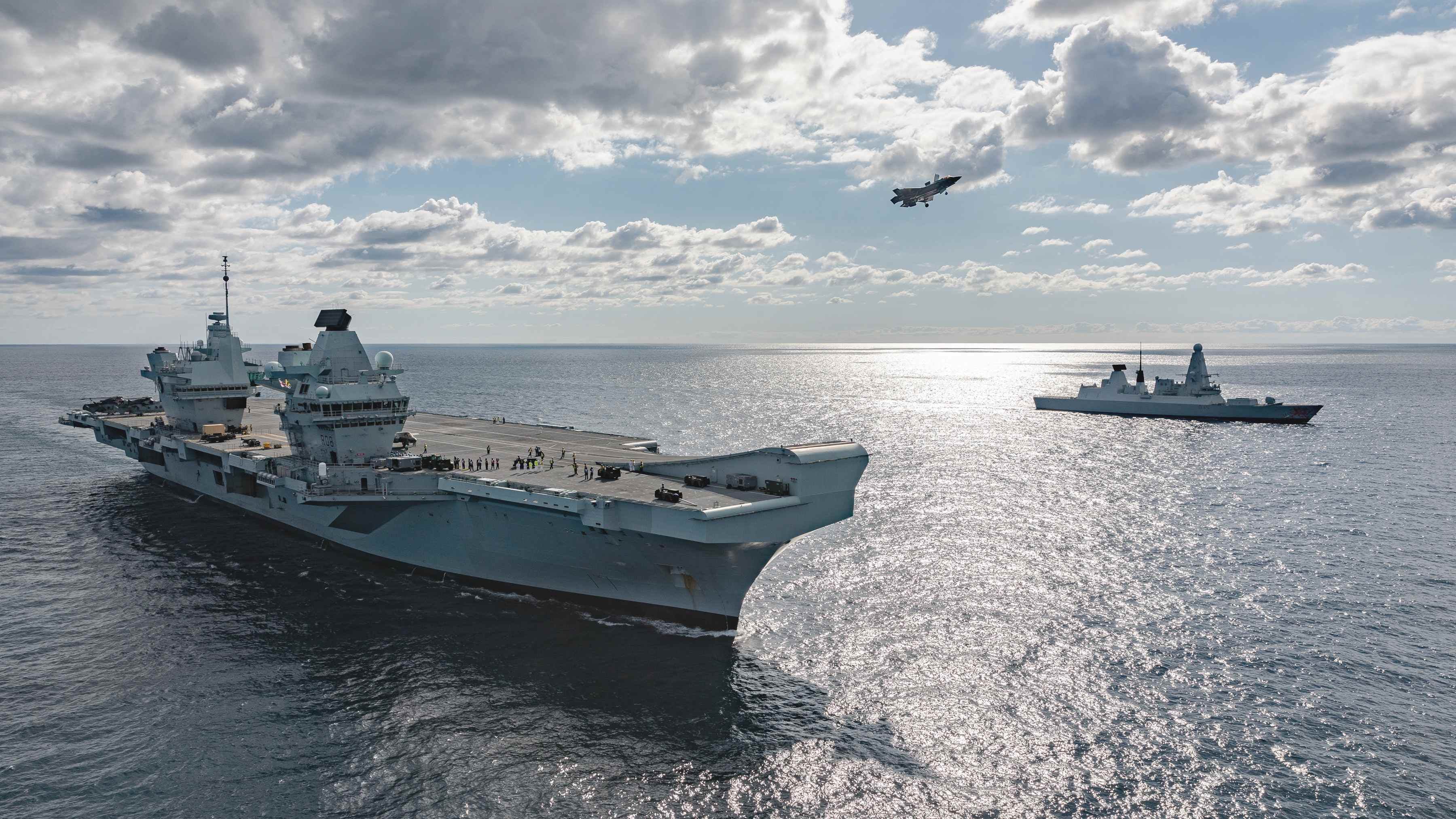 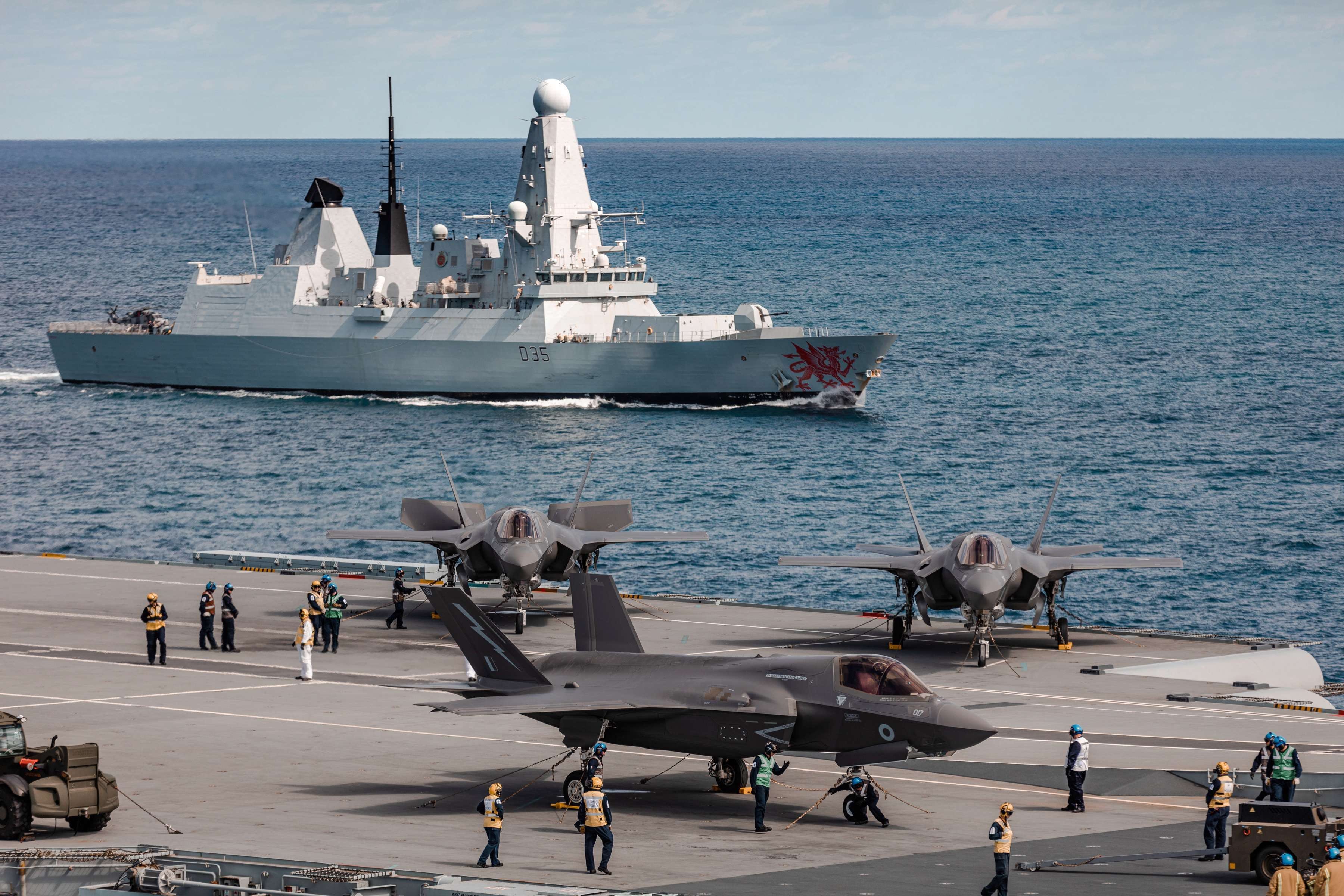 I love the way the F35B does that Predator thing (from the movie) when it opens it’s lift breaks prior to take off.

Are you scared yet….

It does look great, reminds me of a transformer when goes into STOVL mode 😆

Maybe it’s just the angle, but the jet blast (particularly the first launch) looks really violent for the deck crew. The launch chief in the white and yellow (no idea of his proper title) must look like one of those weatherbeaten leather fishermen from the Faroes after just a couple of launches!

Yes he earns his money. Probably looks like an old picture of Spike Milligan.

Surprised he’s not tied to the Mast

You can follow some parts of the exercies by plane finder.net

If these aircraft were the Alert 5? Then the time between take off is quite slow. I know it’s training, but how much faster could they do it?

On a separate note, Japan has started work on converting their “helicopter destroyer” JS Izumo for F35B operations. The conversion is to be done in stages, with the final stage ready by 2025.

Does seem slow doesn’t it

In emergency war footing up to 24 jets can launched in around 5 minutes if I remember right. Happy to be corrected though.

Fyi projected sortie rate on QE class is 72 sorties per day, with surge up to 110. No way you get 24 planes off the deck in 5 minutes, not even the Ford class can do that.

No worries, I thought I had read as such but obviously misunderstood the figures. Would be interesting how many could be launched for emergency CAP in a war situation though. If they were lined up, primed and ready to go I would imagine we could still launch a fair few within 5 minutes.

Have you seen the new Australian defence budget? An extra Auz $270 billion over the next decade. The UK could do full carrier strike, with all the missing weapons, planes, V-22, escorts & supply ships, with that sort of a budget boost.

Let’s be honest australia could do with it.

Yep and they’ve just announced they’ll be the first export customer for the AGM 158C LRASM. Will initially be carried by F18. Later presumably by F35 and may be fitted to some of the MK41 VLS of the new Hunter class frigates In due course? These guys taking their defence very seriously.

We should be looking to fit Traps on the carriers, then we can go for a fixed wing solution to properly do the job of the Radar Merlins

In my opinion the best replacement for the “Radar Merlins”(Crows Nest) is the same radar being out in a modified Leonardo AW609 vitol aircraft. The AW609 is not as big as the V22 Osprey and do takes up less space on the carrier. It has pressurized cabin and can go up to 25,000 ft thus extending the Radar horizon further than the Merlin helicopter. It also has a longer range and thus wider area coverage than the Merlin. This approach is cheaper than converting the carriers in CATABOR carriers. AW609 is more expense than the Merlin but my suggestion also… Read more »

The AW609 can’t be militarised, it’s civi only.

Yes just remembered that Bell has the rights to that in the mutual agreement. However without checking they seem to have gone in a different direction now with the Valor so would that potentially change the scenario I wonder. In fact have just checked and that seems unlikely as Bell are very conscious of competition to the Valor in military use and the US Marines were even put off the option though that was many many years ago. What worries me mind is the extremely long gestation period for this aircraft and the technical problems encountered. It has had half… Read more »

Even CATOBAR carrier aircraft like the F-18, in the not too far future will struggle with deep strike missions against peer
enemys.
It looks like drones will be needed in future for deep strike.

Why? F18 can do buddy refuel to extend range and then old school low flying to do deep strike 😉
an F35 is not really stealthy once it passes the border, you can see that massive exhaust on IR alone, not to mention stealth is optmized front facing, but once inside enemy lines your rear and sides will show up on radars 😉 good luck on your bombing run to Moscow or Peking hahahaha, that is a 1 way trip.

Realistically, I don’t think any passive stealth aircraft since the early Cold War has been expected/able to conduct such a strike whilst going completely unnoticed.

I hope there is a drone configuration out there that will be able to do what the fixed wing would do.

Hearing the news today the carrier group will certainly need a high level of competency if it goes to the South China Sea and future investment and capacity often talked about here, by the medium term.

I notice that all the F-35B’s landings are still just vertical landings, no shipborne rolling vertical landings (SRVL) as far as I can see. As the RN/RAF are now developing an initial maritime operational capability rather than first of class trials, I would have expected them to be intensively practicing SRVL’s. I wonder if the original October 2018 SRVL trials demonstrated that real-life SRVLs were far trickier and riskier than the simulator had indicated? Maybe they are waiting for aircraft software updates, better landing aids, or both? Or maybe the whole concept is dead? If the later, a key argument… Read more »

It’s about time we had our own carrier strike group. I’ll be a lot happier when the aircraft carrier has the UK & partners gen 6 aircraft than this flying bucket of sh*t. Before any fan boys start slagging me off for saying it like it is about the flying block of lard. There’s a big reason all of the major recipients of it all announced they were going to build their own gen 6 aircraft & it’s not because the flying pig is fantastic. Terrible performance, over reliant on stealth(all eggs in 1 basket) can’t go up against gen… Read more »

Davyro, I dont blame you for stating as such, there has been many a negative story on the F35 over the years. But I think you need to go away and do some research on the more recent performance reports. The F35 has recorded excellent kill ratios at last years red flags. All pilots who fly it are now unanimous in its transformational qualities, and would pick it over any 4th gen fighter every day of the week. And by the way, the F35A can dance with almost the best of them when dog fighting, and can pull 9G like… Read more »

What old reports? The latest reports are still terrible! Just go read the latest GAO and DOT&E reports. If it’s so great why is Airforce modrnizing and ordering new Eagles, why is Navy ordering F18 and still not operating F35C in ops? This project is ovr a decade late already! Just recently, F35A is not to fly within 20 miles of thunder due to problem with fuel system, the thing literally risks blowing up! Still terrible and sub par operational rates! Alis is dumped and now they plan on developping Odin, problem is they are still using LM and its… Read more »

Yes, still issues to resolve, but when you consider the challenges involved in a project of this size and complexity it’s not surprising. I cant comment on all the deficiencies, bit I do know that many would not affect them in a war scenario. Items such as limiting supersonic flight is based on one aircraft found to have issues with the coating. Despite lots of testing to try and recreate the issue, they cant and has not happened again. The limit is purely there for peacetime ops until they can work it out. In war, they would fly unrestricted. The… Read more »

Glad you are happy and think it was money well spent. But they still do not fire storm shadow, meteor, or antiship missiles, this seriously limits their usefullness for carrier ops. This won’t happen until after block 4, which is going to be late, 2026 at earliest for block 4, then you need to certify the weapons on the aircraft, this is not done overnight. The upgrade is $27m per plane and the MoD has recently indicated that it will forgo the upgrade, that will cover minimum half the F35 on order since by 2023, 24 F35B should have been… Read more »

So will the carrier strike group still be without a dedicated AEW aircraft when it makes it’s first operational voyage? If so that is a huge disadvantage when going up against a near peer enemy. Makes your air wing less effective.

Yes, it was reported on here.

Maybe on the next deployment it will have it. 🙂

Independent Scotland could have its defence ‘Scot-free’ say experts