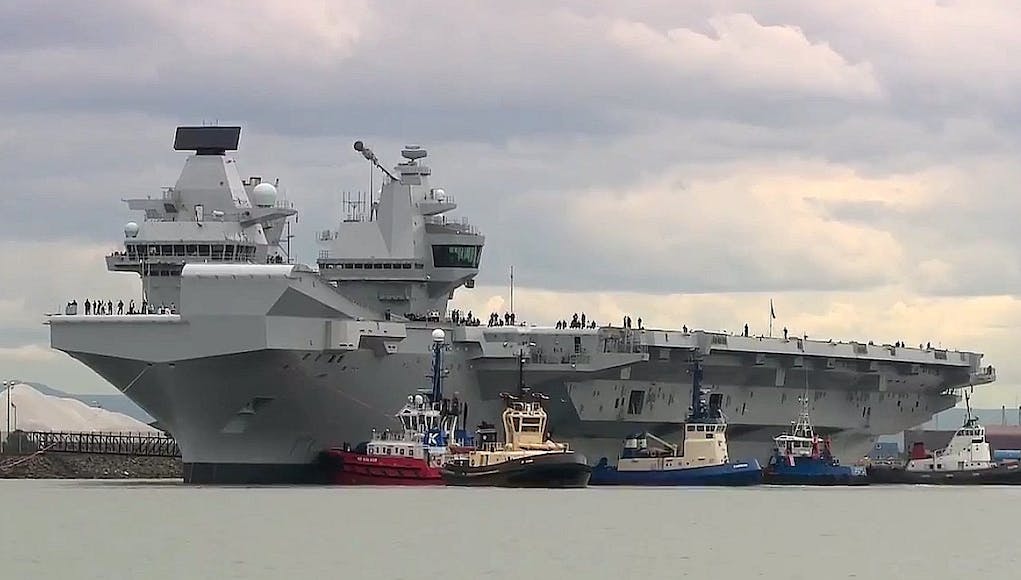 Supercarrier HMS Queen Elizabeth started moving early in the afternoon and was out of Rosyth Dockyard by the evening, she will soon sail for sea trials.

The vessel will now anchor in the Firth of Forth and sail under the bridges in the hours before midnight tonight.

“This is a historic moment for the UK as our new aircraft carrier takes to sea for the very first time. This floating fortress is by far the most powerful ship ever built in Britain that will enable us to tackle multiple and changing threats across the globe.

HMS Queen Elizabeth is an enduring example of British imagination, ingenuity, invention that will help keep us safe for decades to come. She is built by the best, crewed by the best and will deliver for Britain.

For the next fifty years she will deploy around the world, demonstrating British power and our commitment to confronting the emerging challenges from a dangerous world. The whole country can be proud of this national achievement.”

Thank you to all who have made this possible. Next evolution is to anchor before proceeding to pass under the Forth Bridges #QNLZatSea pic.twitter.com/viQJgtodpb

The carrier will now conduct a series of trials as she is put through her paces on the journey to become an operational warship.

The Queen Elizabeth Class aircraft carriers will be the largest surface warships ever constructed for the Royal Navy and will represent a significant increase in capability. The vessels will be utilised by all three branches of the UK Armed Forces and will provide eight acres of sovereign territory. Both ships will be versatile enough to be used for operations ranging from high intensity conflict to providing humanitarian aid and disaster relief.

The class will have increased survivability as a result of the separation and distribution of power generation machinery throughout each ship. The class has been designed with twin islands, which separates the running of the ship from the flying operations resulting in greater visibility of flying operations.

Instead of a traditional single island, the has two smaller islands. The forward island is for ship control functions and the aft (FLYCO) island is for flying control.

The reason for two bridges is, simply put, due to the gas turbine exhausts. The design would have either had two small islands or one large, long island. The two smaller islands were chosen. The location and alignment of the islands are based around the 2.4 metre diameter gas turbine exhausts which were pre-fitted in the island and below in the ship superstructure.

Surprisingly for their sheer scale, each ship will only have a total crew of 679, only increasing to the full complement of 1,600 when the air elements are embarked. This is made possible by extensive automation of many systems.

Queen Elizabeth is due to be handed over to the RN in 2017.

She’ll begin flying training with helicopters later this year and this will be followed by F-35B jets from 2018.

A glorious sight, but blimey that was a tight squeeze through!!

At last! All the men and women who built that great ship have so much to be proud of! We await the Prince of Wales, lets hope it doesn’t take too long.

Such a shame it didn’t happen in daylight, and a small national event wasn’t made of it. Can’t wait until she makes home port – I’ve been promised a prime viewing spot near the harbour entrance by a friend. Now we’d damn better make a big national event of that. A flying display with the Red Arrows, lots of water jets, and a huge flotilla escorting her in. And while we’re talking about this again, I really want to know the answer to the following questions: – Why are the islands so short? Sitting in those you cannot see the… Read more »

James – I am no expert but I would suggest the following answers (for discussion): – I think you slightly exaggerate the distance of close in sight limit. I would suggest the Skipper on this ship has far better forward sighting than does the his counterpart on the Ford Class. – Moving the ski jump forward would just extend the ‘runway’ and offer no other deck operations benefit. The actual operational deck area is already as good as the Ford Class. – Following the 2010 review I understand that CATOBAR has been ‘passively engineered’ for later fitment if needed. Personally… Read more »

Thanks. I’ve spent some time looking at more pictures of her in the open sea, and see that visibility is nowhere near as restricted as I thought. Still, I wonder why they didn’t choose to have even better visibility. Understand the point about the length – but with another 50m up front, that would give the same distance extra behind the launch line – because the current length is already sufficient to launch. But, I guess, how long is a piece of string? Shame we can’t support any fixed wing at all though, including from all of the FVEY navies,… Read more »

Will she be passing Sheppey anytime, as I would love the opportunity to see HMS Queen Elizabeth ?

Why call it a behemoth? The behemoth was a land dinosaur not a water type like the leviathan. Someone didn`t read the Book of Job right.

Has the Clyde been betrayed over support ship work?

French Rafale fighters to embark on US supercarrier