It has also been revealed that HMS Queen Elizabeth will sail with a task group of nine vessels, including a nuclear submarine.

And we are off, on a journey like no other.#JustAddJets

The vessels will participate in the UK’s Carrier Strike Group exercise (GROUPEX) and Joint Warrior 20-2 (JW202).

Commodore Michael Utley, Commander United Kingdom Carrier Strike Group, is reported by Save The Royal Navy here as saying that HMS Queen Elizabeth will be escorted on her ’round the world deployment’ by two Type 45 destroyers, two Type 23 frigates, a nuclear submarine, a Tide-class tanker and RFA Fort Victoria.

Afternoon all,
When do aircraft carriers usually embark their jets? Is this typically done at sea rather than when alongside?
Presumably when disembarking after an operation, they would fly directly to Marham?
Hopefully someone with much more knowledge than I can fill me in.
Thanks in advance
[email protected]

At sea. The aircraft will spend a few days getting any new pilots carrier deck qualified, then they will do it at night. And then off for the main part of the exercise. ? It’s much quicker to get crews deck qualified on a STOVL carrier, then a catapult equipped vessel. An advantage ofter over looked.

This is a good point. A plane would almost certainly find it impossible to land, never mind can off, from a stationary ship. But a VTOL plane would have a good chance.

Jets always embark/disembark at sea, unless in extreme circumstances. If a jet has become a hangar queen for whatever reason, they can disembark whilst alongside in Portsmouth. A single F35 did just that not that long ago. But it’s very rare. Think we did it once with a Harrier when I was in the mob.

The only time I know of more than a single aircraft doing it, was 82 when a few embarked before they left port. But still the majority joined at sea

Yes one did it when QE was in Portsmouth after the last major trials when it got delayed for repairs there is a video of it if you search.

This is very exciting, an absolutely world class CBG. Well done to us.

we are often under estimated, this shows just how good our armed forces are.

Its also good to see allies joining, as they often do with USCG’s

well done to everyone involved.

Congrats to the Brits to getting back into the carrier game! Hopefully this will take some pressure off the American carrier battle groups.

I really think the 2 island design, also created out of necessity will become iconic.

It is a very, very smart solution

Yes. But why out of necessity? I’m curious.

its for the exhuast uptakes – its a staggered arrangement

and a very smart solution to this problem

I think dual islands will become the norm in future – now its done you do wonder why it was never thought of previously.

I do wonder why they don’t have a lift just right of the ramp, so that planes can land go underneath, be maintained and armed as they move to the aft lift and then pop up ready to launch, but that is just me I guess.

The area to the right of ramp, could be the place to catapult drones off the carriers in the future.
Maybe a mini bolt on/off catapult in the future?

it could, but it does seem more efficient to have a maintenance production line underneath where a plane lands goes straight below decks and resurfaces however many minutes later – ready for the next sortie, potentially with a different pilot if needed.

I know it doesn’t work like that for some things, but it could for others, including re-arming.

If my memory is any good they wouldn’t be able to get a lift by the ramp as there’s no hanger below it. Also if you going for quick turn around, you rearm and refuel on deck and go again, taking it below and back up again add 2 tasks to a chain that aren’t getting a plane in the air.

A very proud moment indeed. What a great stroke group too!

Some nice piccies of the carrier with lots of F-35B on the deck over on Save the Royal Navy. 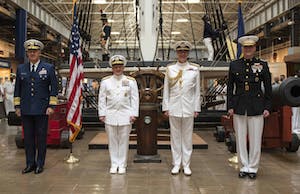