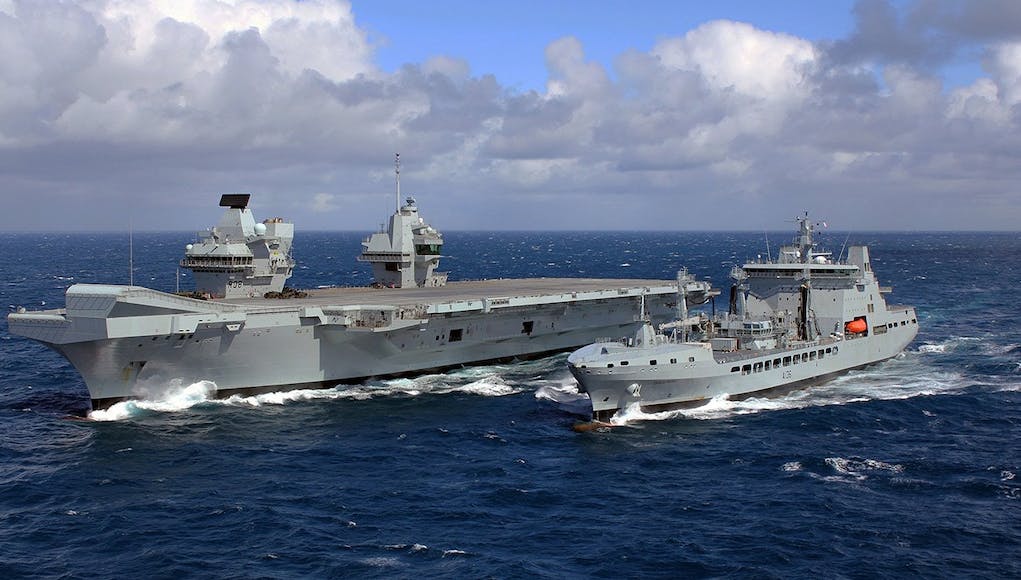 HMS Queen Elizabeth has successfully received fuel in the North Atlantic from RFA Tidespring for the first time.

“After a dry run earlier in the year, HMS Queen Elizabeth successfully took on fuel in the North Atlantic, receiving ‘amber gold’ from RFA Tidespring, the tanker purpose built to support the new aircraft carrier on her global operations. In fairly choppy conditions, the 65,000-tonne warship practised the manoeuvre – known as replenishment at sea – to take on supplies on both her port (left) and starboard (right) sides.

The two ships were just 42 metres – 138ft – apart, sailing along at 12 knots (14mph/22kmh) as the lines were passed and the fuel hose transferred to hook up with the intake on the carrier. If needed, the Tide-class ship could deliver 800 cubic metres of fuel in an hour – that’s enough to fill up more than 14,500 Superminis… and less than one twentieth of the total amount of fuel the tanker carries.

For the maiden transfer just 220 ‘cubes’ of F76 marine fuel was sent across – the replenishment was more about testing the principle rather than the carrier’s tanks running low.”

“This is one more significant step forward in our growing capability – knowing that we can be refuelled from a tanker means HMS Queen Elizabeth can roam even further from home,” said the carrier’s Navigating Officer Lt Cdr Sam Stephens.

“The fact that our first replenishment at sea was with RFA Tidespring – the first in her class of the tankers which were designed specifically to operate with us, made it doubly significant.”

“The Tide-class have been built to provide worldwide fuel support to the two new UK carriers so this is a significant milestone in bringing both ships into operational service. Our first replenishment – in challenging weather conditions –was a success and marks the start of a very close and enduring relationship between the two ships.”

Totally agree – and good to see the programme coming together so nicely. Well done to all those involved in the QE and Tide class programmes.

Hello: anything missing on Tide? CIWS? Anyone?

Great picture though, and so close at 12 Knots. Well done Navy.

Anyone know the source of the photo?

Hate to think it was CGI.

It was posted with a couple of others the official Twitter page of HMS Queen Elizabeth.

Thanks for the reply

Two truly beautiful ships!
Well done to all the boys and girls.
???

Am I the only who thinks (everything else permitting) that Queen Elizabeth should sail to the states with a Type 23, 45, Tidespring and maybe an Astute/Trafalgar accompanying her instead of just a T23. Not only would it provide experience of working with a moderalty sized task group before being thrown in the deep end come 2020 but would also provide some excellent bilateral training opportunities with the US Navy, Coast Guard etc.

Why not a T45 as well? A very historic deployment deserves a full hand IMHO!

Doh! Sorry Chris! Missed it. Think I need to increase my uptake of lycopene…

Love the idea but not for me. There’s a plan. It’s working. Step at a time. We’ll be ready when we need to be although I can’t wait to see them all together.

The photos will indeed be something else (not to mention capability).

good chance to further enhance operating together i’d like to hear she has finally got her phalanx and all the other bits fitted and helo aws weapons aboard her.training exercises would be more useful operating the helo’s to interact and upgrade asw tactics with an ssn as a target

AGREE IF ITS POSSIBLE A PERFECT TRAINING OPPORTUNITY, AND IMPRESSIVE SIGHT.

I was on Resource then
My first ship

In fact I would make it a full carrier task group – just to show off a bit.

The Tide class are massive in their own right, just goes to show how stunning the QEC is.

That was my very first thought when I saw the picture. Tiderace, a very big ship in her own right, actually looks small next to QE.

Oops. Thanks for the correction.

Bloody marvellous. 2 super new ships. Well done to servicemen and women for your hard work and commitment. Let’s get a few more frigates and astutes to guard these ships and really give our maritime nation the hard hitting power we need. Very few countries will be able to match us if our armed forces can get just a little bit more kit, personnel and some newer weapons. 3% GDP to defence ratio should do it. We are putting taxes up to pay for NHS let’s just do the same for the armed forces. I personally am happy to pay… Read more »

The O boats and the rovers would of Done just as a good job ?

chris
Reply to  Mr A Clemson

Apart from the fact that the Rovers can only steam a full 10 knots than QE and would never be able to keep up with a deployed task group, causing everyone else to slow and putting them at more risk. Whilst i agree that any decommissioning is a tragedy when before its time the Tide class do a much better job than anything there was previously.

Now QE has taken on fuel RAS(L), how about a RAS(S) (stores, for you non navy types) to include a VERTREP (vertical replenishment).

Just a thought, when and why did they ditch the large Ship’s Crest and nameplate that used to be on the Ski Jump, did the RN dispose of that as soon as she was handed over?

Probably for the same reason that the big red dragon on the bow of HMS Dragon was removed…Its a pain in the arse to keep looking good and costs a fortune to put on.
Anyone want to hazard a guess how much the Red Dragon cost to put on HMS Dragon?
Closest , withing 5k, wins a coconut…

Question is what do they do with them ? Is there a warehouse full if random, pointless bits of ships………. eBay……….

Used to do this on H M S Eagle years ago.

Gunbuster. I have it in good authority from a member of the Lynx flight in Dragon for the first deployment that said dragon was sponsored so didn’t cost the MOD anything. However it obviously cost something so I am going to go high at £ 285,000!
Looking forward to my coconut!