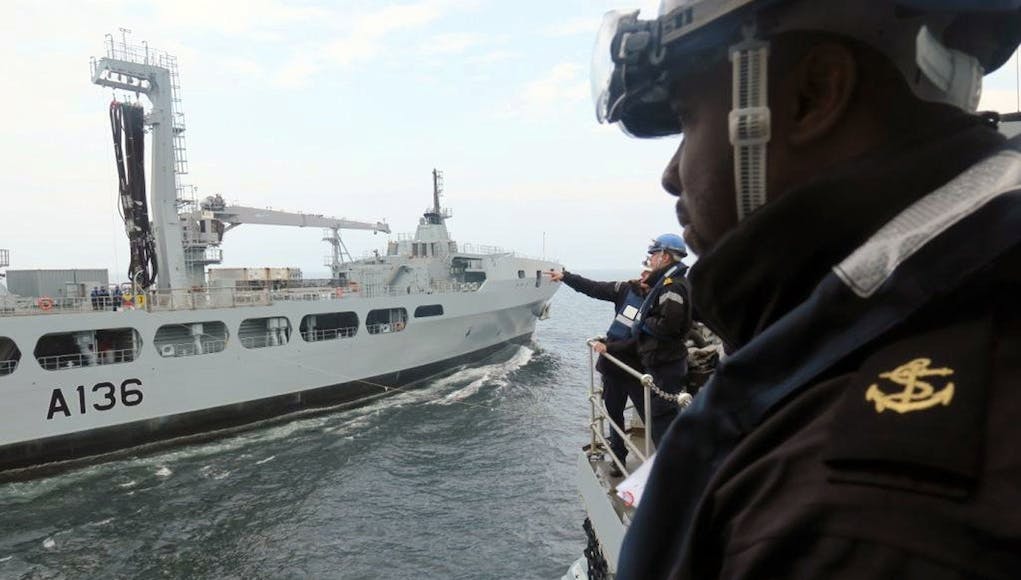 Much of HMS Westminster’s ship’s company had not participated in a Replenishment at Sea (RAS) before – after all the last RAS that HMS Westminster had conducted was in November 2017 with RFA Wave Knight say the Royal Navy.

Once the ship was in position, Leading Seaman Louis Vine shot the soft nose projectile across to RFA Tidespring to begin the exchange of lines between the two ships.

“Being an Above Water Weapons specialist, I pride myself in attention to detail. For me to fire the projectile on to the ship first time during RFA Tidespring’s first operational RAS is a great honour and a memory that will stay with me throughout my career,” said Louis for whom this was his final RAS aboard Westminster.

According to a press release, four lines were pulled across to HMS Westminster, allowing communications between the ships, a distance line for correct separation, a spare line and finally a line to transfer fuel.

Once the exchange of fuel was complete Cdr Kelly sent over a crest and a bottle of red wine to Tidespring’s Captain Simon Herbert.

As the two ships separated the crew took a well earned break; the serial was over and the ship could return to conducting operations after a successful RAS.

Like AAR for the RAF, this gives the RN the operational reach and flexibility to persist, manoeuvre and strike as required. A real force multiplier.

I prefer the French system where there is a hose for fuel and a separate dedicated smaller hose for bulk transfer of wine. Now you’re talking!

We should imediately fit a gin and tonic line or as it’s the navy to keep the Scots happy 12 year old single Malt perhaps.

I thought they were all powered by Champagne? 😀

Tidespring is a beautiful ship.

Hope they chucked over a few bottles of wine too!

Or a few crates of beer.