BAE Systems and The University of Manchester have successfully completed the first phase of flight trials with MAGMA – an unmanned aerial vehicle.

They say the aircraft uses a unique blown-air system to manoeuvre the aircraft which they hope will pave the way for future stealthier aircraft designs.

The defence giant says that the flight trials are part of an ongoing project between the two organisations and wider long-term collaboration between industry, academia and government to explore and develop innovative flight control technology. Further flight trials are planned for the coming months to demonstrate the novel flight control technologies with the ultimate aim of flying the aircraft without any moving control surfaces or fins. If successful, the tests will demonstrate the first ever use of such circulation control in flight on a gas turbine aircraft and from a single engine. 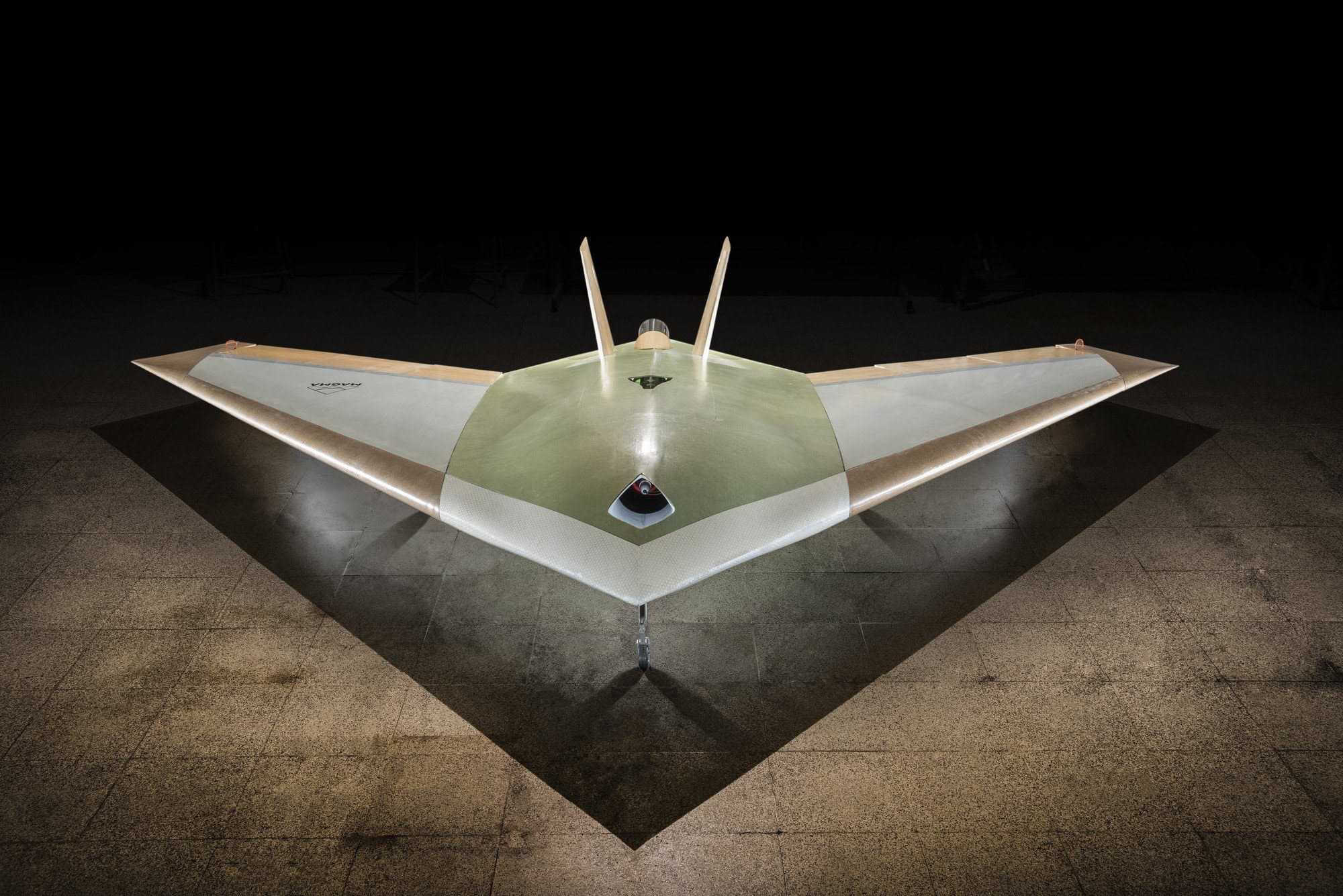 “The technologies we are developing with The University of Manchester will make it possible to design cheaper, higher performance, next generation aircraft. Our investment in research and development drives continued technological improvements in our advanced military aircraft, helping to ensure UK aerospace remains at the forefront of the industry and that we retain the right skills to design and build the aircraft of the future.” 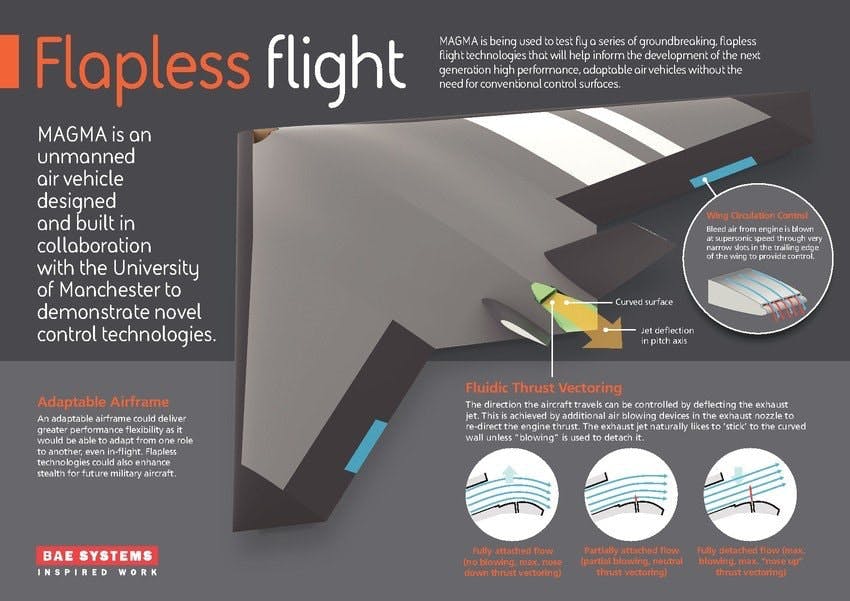 Bill Crowther, a senior academic and leader of the MAGMA project at The University of Manchester, adds:

“These trials are an important step forward in our efforts to explore adaptable airframes. What we are seeking to do through this programme is truly ground-breaking.” 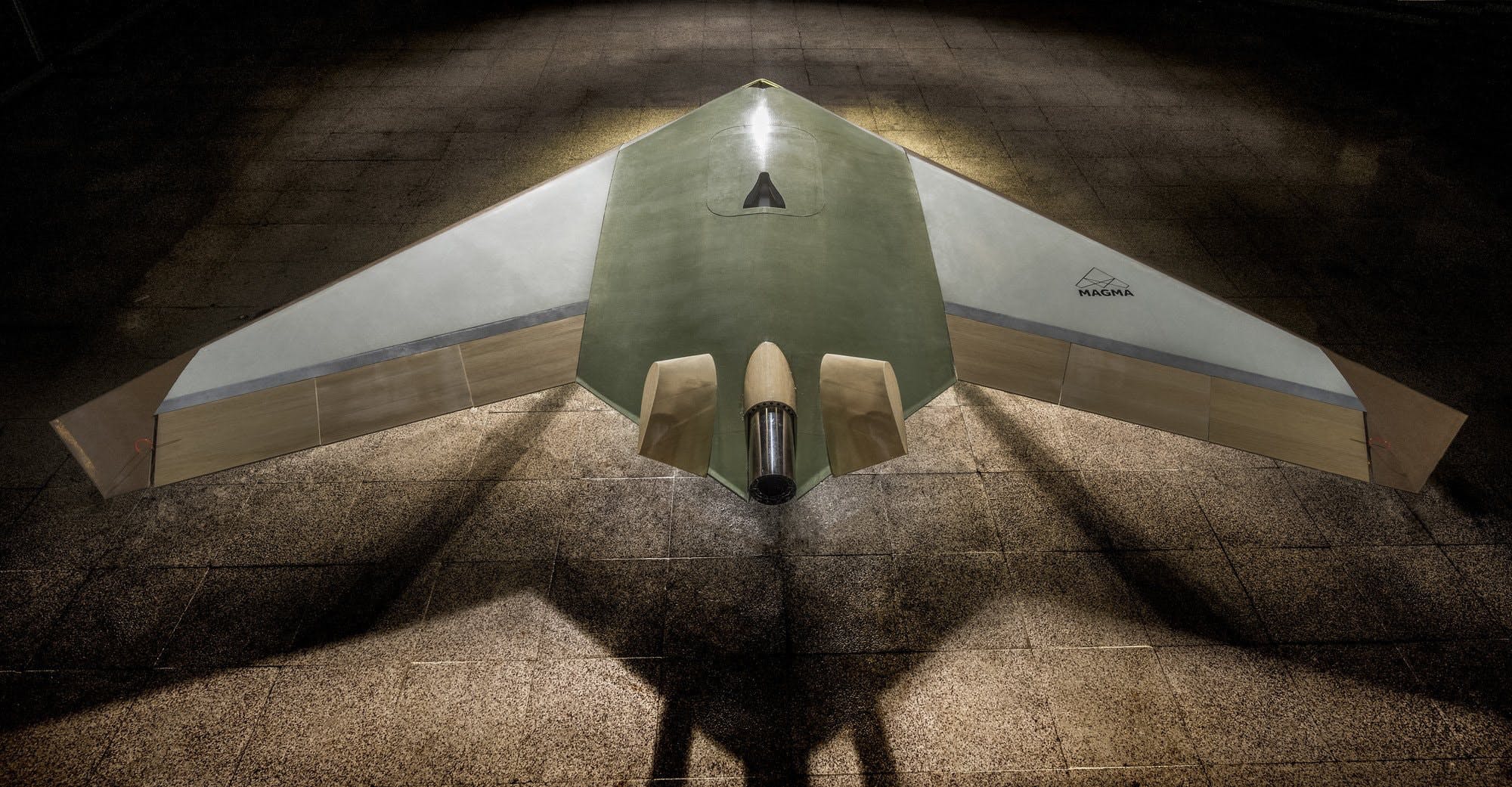 Additional technologies to improve the performance of the UAV are being explored in collaboration with the University of Arizona and NATO Science and Technology Organisation say BAE.

I do not believe the UK political will power to develop or lead a project for a next generation combat aircraft.

However this type of technology will mean the UK has role to play albeit as a partner (junior or otherwise) in an international project (most likely the USA). Generating investment, jobs and tax revenue on the UK.

Talk of a European project, no doubt dominated by France, is wishful thinking in my humble opinion.

I agree. Look at the TSR2 project. Far more advanced
than anything the US had. Then Harrier – the US bought
the license.
Every advanced British development is bought by America because successive UK governments claim
future development is too expensive and always go for
cheap options, making us beholden to the US for
MULTI-BILLION dollar military equipment.
We have the best brains in the world. Use them and be
committed financially and politically to see them through.

……and someone will have the really bright idea of sharing this technology free of charge with France who will then build them and make a killing.

Of course it looks like we are already ‘sharing’ (for which read giving away free, gratis and for nothing) with US organisations and a US dominated NATO.

When Oh When will we EVER learn to look after our own interests first. Everyone else looks after themselves first so why not us? Bunch of mugs sadly….

Chris. I agree with the French comment and the usual political practice of being more concerned with others interests than UK industry. However, concerning the US, one of the areas we have a special relationship is in the field of advanced aviation research. That works both ways. Early RAM – Radar Absorbent Material was given to the US in the 60’s and the MoD had early access to the F117A, with RAF pilots flying it while still classified. There are no doubt many other examples since then. Indeed the UK being in two camps ( US and Europe ) is… Read more »

Perhaps NATO is dominated by the USA because no other b….. will spent the money.

If your opponent uses horde of UAVs, surely you’d work night & day to hack into them & turn them on your opponent. I just hope They’re hacker proof & we never face rogue AI. Terminator looks less fictional by the day. A rich evil genius could decimate humanity from a keyboard.

If they are pre-programmed before take off like Cruise missiles they should be hack proof, they just need to fly to their target drop their munitions and return to base, two way communication should ideally be very limited unless it is to abort to prevent hacking. The UK should be building over a hundred of these to deliver serious capability.

Even flocks of birds get wet in the rain.

I think this is the future for the UK and can see 2-4 of these being controlled onto target by an F35B in a stand off position using the MADL connection.

We should go alone on this as the French have proven to be unreliable partner historically, with the same games being played on Taranis and it becoming a defacto French product.

I think we can do this and it can be a world beater. So good news.

I’m not saying I’m for or against the French as such but what is it that they have “stolen” that gets everybody worked up?

Geoffrey – The French have proved remarkably unreliable and frankly self serving when involved in co-operation agreements. The last successful aircraft built by a Franco – British alliance were the Jaguar and Concorde in the ’60s. A most recent example is how they are now baling out of the A400M having promised to buy a certain amount. Mind the Germans are just the same. They joined the Typhoon alliance, learned all the test data, proofs of concept, engine specs and future designs and then disappeared off to produce an absolute copy in the Rafale. The shame is had they remained… Read more »

Yeah, but apart from that…..! Cheers Chris.

They do produce good cheese.

But at least they’ve got bigger fish to fry (screw over ?) with the EU defence plan. It’ll be the Germans and the rest keeping the French Aerospace industry in the style to which they’ve become accustomed.

Very true Mike, Chris, Pacman et al: unless of course the Chinese students at U of Man have already APPROPRIATED THE DESIGNS and sent them home. Then we will be a jnr. partner with the PLA. Sadly we cannot trust the French on much these last 1100 years. We need a government that puts the UK first in all matters.

No more humans sitting atop of a huge engine inside a glass bubble. If you look at it that way, unmanned is inevitable.

The UK does insist on man in the loop and I think this is right from a moral point of view. I do see these working with the F35B which would act as a command vessel – provide interference and guidance from a stand off position and all importantly the man in the loop. A force of 64 F35B’s and 256 (1:4 ratio) of these would be a game changer for the UK and should be really cost effective as you would expect to get 4 for the the price of 1 F35B surely. This could also perhaps be used… Read more »

I saw a proof of concept prototype displayed in the Manchester Museum a few years ago. There was also a brief piece of film footage shown on the B.B.C. in a news bulletin. I fully exect this British breakthrough to be given away free, gratis.

Bae have this on youtube. https://www.youtube.com/watch?v=XhE4t9hUUv4
Interesting that Magma has reverted to a tailed configuration cf Taranis. I wonder if this is because they won’t be doing low observable testing on it, or if the extra stability was deemed necessary during testing of the new control systems, or maybe that Taranis was found not to have sufficient control authority.

Chris
Reply to  Bloke down the pub

Bloke – That is a piecemeal fabrication by some YouTube contributor. It is not a BAE offering and doesn’t show MAGMA at all. The UAV shown is Taranis but I had to stop watching when the computer voice started….