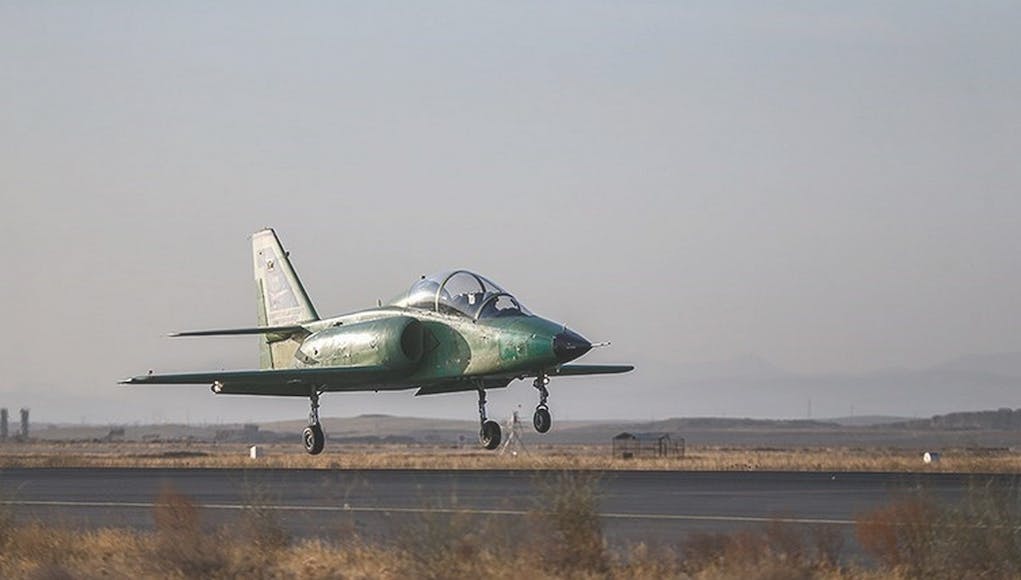 The Iranian Air Force has conducted a test-flight of the Yasin jet trainer, a locally-produced aircraft.

On October 17, 2019, Iran showed off the jet trainer, referred to as Yasin, at a ceremony at Shahid Noje airbase in the western province Hamedan.

Yasin appears to be a new name for the Kowsar-88, a trainer aircraft unveiled in 2017. The aircraft is remarkably similar to the Taiwanese AIDC AT-3 Jet Trainer.

According to analysts Forecast International, the Iranian Air Force is considering the use of the Yasin jet trainer in the light attack role.

In an interview with Iranian state TV over the weekend, Amir Karim Bani Tarafi, the Chairman of the Iran Aviation Industry Organization, said the Air Force is examining the prospect of using Yasin for close air support missions (CAS). He said:

“At present, the plane only has a training function, but it can be in the future completed and equipped with bombs and missiles and be used as a CAS plane.”

Is it a trick of the light? But to me the finish looks really poor.

The Woman From Delmonte
Reply to  Ian Skinner

Apparently the Persian aeronautical engineers used a secret combination of balsa wood and cardboard coated with a mix of reflective Matt paint that deluxe developed in the 1980’s but never released as it was stolen by the Chinese. It’s made to look poor so it will fool its enemies into thinking its a piece of crap……

Andy P
Reply to  The Woman From Delmonte

It does look like a crap version of the generic jet trainer. Its inspired me though if its this easy I just need a fag packet and a biro and I could knock up my own. 😉

I don’t think we will be seeing a replacement for the Revolutionary Gurads speedboats in the light attack role any time soon.

This is the prototype. Obviously they have adapted through a period of time and the reality is the plane fly’s and it is using it’s own engine, avionics and airframe. The green colour on the plane is because of testing, so don’t look at this as the final product. This plane will be further improved and the final product will be a good replacement for the F-5 jets.

And also an excellent replacement for a worn out garden shed.

Pars wrote:
it’s own engine,
Doesn’t it use the engine from the F5?

They have been passing off a refurbished J85 Variant as an indigenous engine in recent years called the OWJ.

They have got better in recent years producing domestic copies of the components used in their fighter engines, they have also developed significant expertise in using specialised coatings to extend the life of hot components. If they ever normalised relations with the West their r&d in that area will be of interest to Western manufacturers.

Another rip off copy, with the build quality of an old garden shed.

Is it made of vegetables?

Just as well those baw bag crazy Mullahs don’t have the capacity to produce decent fighter jets for the sake of the planet.

I think it’s in stealth mode ie mimicking Korean War wrecks to fool enemy recon. While you are opening the cockpit to get a better look to work out how it got to the Middle East the guys in a balloon above drop fireworks on you. Fiendish low tech tactics.

Looked at this online , looks like a Hawk or Alphajet. So 15-20 years behind a modern military trainer I would estimate. Anyone know if this aircraft has a secondary light attack/ air defence role?

The Hawk and Alphajet have been around longer than that and still look ‘Guucier’.

Fair play to them though for wanting to build up the capability to build their own aircraft, they have to start somewhere but it’ll be a while before they catch up with whatever the Saudis or Israelis are cutting about in.

As much as we deride the IRIAF as being outdated – which it certainly is, if it came to a shooting match they know their Air Force isn’t going to put up much of a fight against Western Air Forces armed with F-22, F-35, Typhoon, Rafale, etc. Iran knows its strengths and weaknesses just like we do. The air domain is not theirs – they know it and have invested heavily on area denial in the Persian Gulf. They pose an enormous threat to our ships and that is something Western navies are acutely aware of. Recent Pentagon wargames have… Read more »

How about get all of our ships out of range until we strike with thousands off missiles on high value targets then we head in and finish them off, it would be mass deaths but that’s the cost of winning a war.

The real question is how does it fly? Like a bullet or a fag packet in the wind.

For some strange reason no one seems to want to give credit to the Iranians for developing the deadly Qaher 313. The Qaher has a very smooth finish because its almost completely made from composites with very little metal. They have also got rid of most of the messy inspection hatches that ruin the aerodynamics of western fighters. They have also made aerodynamic concepts work that were thought to be impossible, the list of innovations goes on.

A quick google says the Qaher is pretty smart, i’d never heard of it to be honest but I’m hardly an expert. It doesn’t look like its in production but looks interesting and as you say impressive if they’re looking to get it into service.

It’s a polystyrene and wooden ground mock up, which has never flew. International experts identified it as a load of Iranian waffle mate.

Cheers, I think there’s a lot of ‘smoke and mirrors’ with a lot of defence ‘projects’. Sounds ace on the blurb but speak to the poor mopes who use it and they bitch about it and that’s the stuff that makes it to the stage of getting issued.

Ha ha ha hello grubbie, you at it again with this Qahar 313 chuff, brilliant, I look forward to your informative and well researched posts on the subject.

The Woman From Delmonte
Reply to  Grubbie

The reason nobody gives them credit is because they don’t deserve any , they can’t build anything without copying and espionage .

Its a Drone…. look carefully, its wheels off the ground, but there is no pilot. Or maybe its a badly painted airfix model, or maybe the pilot is too embarrassed to be seen it in and he ducked for the photo…..

There is something strange about the photo. Parts of the aircraft look very bright and shiny, as if in full sunlight, and with a sharp shadow thrown by the engine intake on the forward fuselage, but the runway looks very dark and without any shadows, as if the day was seriously overcast. All very suspect……

Typhoon jets to deploy to the Arctic for secret escort mission