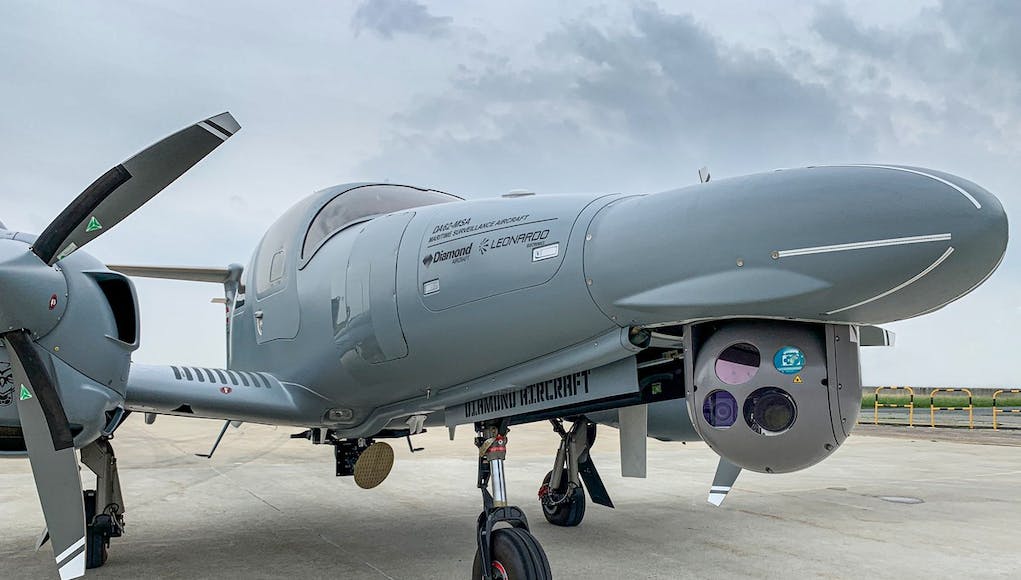 Leonardo and Diamond Aircraft Industries are teaming up to offer a version of Diamond’s popular twin-engine DA62 aircraft customised for maritime surveillance missions.

The new variant, designated DA62-MSA (Maritime Surveillance Aircraft) will be on show for the first time at Paris Air Show later this month.

The company say that it will be outfitted with a full Intelligence, Surveillance and Reconnaissance (ISR) suite based on Leonardo’s ATOS (Airborne Tactical Observation and Surveillance) mission system.

“The collaboration is a response to the need for cost-effective, short/medium-range land and maritime surveillance platforms in regions such as South America, Africa and Asia Pacific. The DA62-MSA meets this requirement by bringing together an affordable and pilot-friendly aircraft with a full set of state-of-the-art sensors which, through the ATOS mission system, deliver a single, intuitive operational picture to the crew.

The DA62-MSA’s baseline sensor fit will include a Leonardo Gabbiano Ultra-Light TS Radar, which comes with an extensive suite of modes including optimised maritime patrol capabilities (such as high sea state detection), high resolution ground mapping via synthetic aperture radar (SAR) modes, ground moving target indication (GMTI) and weather avoidance modes. The aircraft will also come with a High Definition electro-optic (EO/ IR) turret which, like the radar, will be fully integrated into the operator’s touch-screen ATOS display in order to follow and manage the surveillance missions.”

More than 110 Twin Engine Special Mission aircraft have been sold by Diamond and more than 60 ATOS systems are installed by Leonardo on 10 different platforms, including for Italy’s Air Force, Guardia di Finanza (customs police) and Coast Guard and Australian Customs. With the DA62-MSA, Leonardo and Diamond are able to offer an extremely cost-effective and user-friendly light ISR solution for maritime security needs, with a Take Off Weight (MTOW) of 2,300kg, endurance of up to 8 hours and up to four crew able to operate with land and maritime radar.”

“Diamond Aircraft is very proud to step into such an important strategic partnership with Leonardo to provide a cost-efficient high-performance maritime surveillance solution to the market. We all recognized the importance of such a capability and the high demand of many countries to protect their borders against illegal fishing and other criminal operations, This new airborne solution, based on our DA62 Special Mission Aircraft, will be available to the market by the end of the year, ready to deliver and provide security and surveillance tasks. During Paris Air Show 2019, Stand A6, the very first time Diamond will static display this configuration to the audience.”

“Partnership is central to Leonardo’s way of doing business and as such we are delighted to be working with Diamond Aircraft on this venture. Our aim is always to provide the optimum solution to our customers and we believe that this combination of Diamond’s platform with a full suite of Leonardo sensors and our mission system provides an extremely compelling offer for this market segment.”

Diamond Aircraft Industries is a Chinese-owned manufacturer of general aviation aircraft and motor gliders, based in Austria. It is the third largest manufacturer of aircraft for the general aviation sector, and had a global presence; possessing its own manufacturing facilities in Wiener Neustadt, Lower Austria and in London, Ontario, Canada, as well as further production lines operated as joint ventures in other nations, such as China.

Nice to see wikipedia is working

Yes. But good of farouk to post info regardless, saves me looking myself.

What I am concerned with is the links to Leonardo and the introduction to the airframe of the ATOS mission system. As far as I am aware this system is used by several national coast guard services and it has anti sub capability.
This to me must mean that the system can and does integrate into NATO networks.
So the question is who is doing the integration, Diamond Aircraft or Leonardo?

I’d guess that Leonardo would be doing the integration, as Diamond are just an aircraft manufacturer with little experience in this type of thing. Alternatively, it might have been the Austrian employees working for Diamond, similar to how whenever BAE does something for the US, it’s the US subsidiary and employees that handle everything. Either way, I’m sure that Leonardo have taken steps to minimise the risk of the technology getting into the wrong hands.