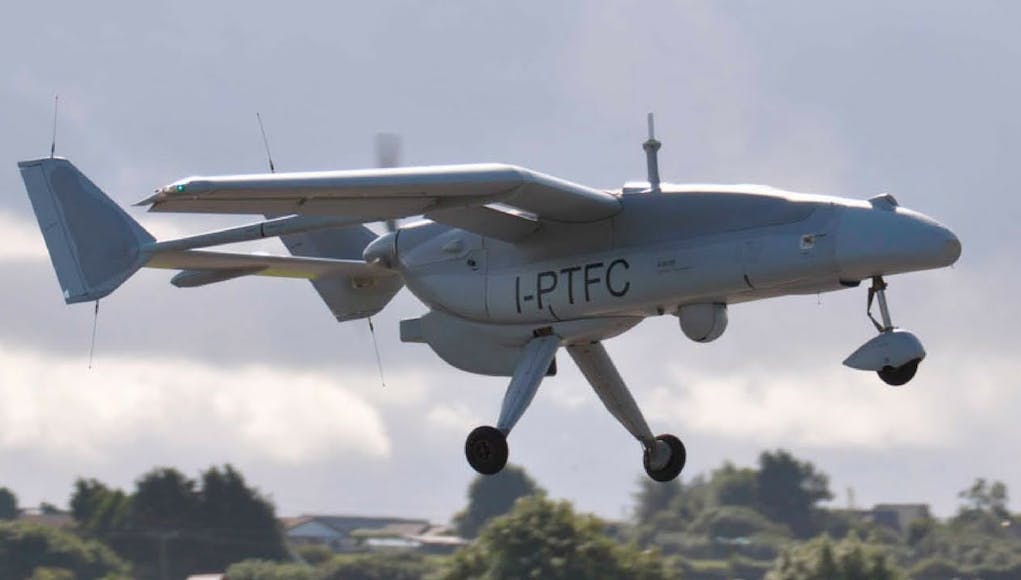 A Falco EVO was tasked with following a trawler suspected of transporting migrants.

On the 20th June, Leonardo’s Falco EVO remotely-piloted aerial system played a key role in monitoring a case involving irregular migrants in the Mediterranean sea as part of monitoring activities of Frontex, the European Border and Coast Guard Agency.

In an operation launched from the Italian island of Lampedusa, the Falco EVO worked with other Frontex assets to identify a mothership trawler as 81 illegal migrants were transferred to smaller boats, a technique increasingly used by criminal organisations.

“Following the transfer, the Falco EVO’s surveillance payloads kept a close eye on the trawler until an enforcement operation was launched by Italian authorities to seize the boat.

The Falco EVO system deployed at Lampedusa Airport has already flown for more than 280 hours on behalf of Frontex, with one mission on the 26th June clocking in at 17 hours and 21 minutes.”

This extra-long mission came about when Frontex received a request from the Italian Authorities to help monitor two boats in the Lampedusa area.

“Monitor” we need to send or turn the illegals back, it’s not fair on Europeans, I don’t know how the Italians and Germans have lived with the mass influx and all the problems that brings, legal migration it has to be not everyone’s welcome and free for all.

We need to provide a genuine pathway for those who genuinely need it. The Dublin agreement needs looking at because it’s not working. No one seems to just stop at the first safe country anymore.

Agree Brom. How do you tell between a genuine refugee scared for their life and an economic migrant though? “I don’t know how the Italians and Germans have lived with the mass influx” Well Cam, my Dads not happy with it. Some villages in Italy have closed the doors and said enough, as migrants are outnumbering the locals. I have that from my own family. As for surveillance, that is all very well. But what use is it if it is not acted on. Are there any official figures showing how many are removed once discovered illegally? It is a… Read more »

Yeah brom, I’m sure we are still taking people from refugee camps in the Middle East to try stop them taking the deadly journey west but not sure it’s very effective. I’m not sure what country has the right answer I suspect not many do. We need to help the people in fear of death faster though, but lots know to say that and do say that anyway to get into countrys, it’s a tough one.

Even legal migration has its problems. All our myriad issues around foreign populations in the U.K. have stemmed from legal immigration

What are the myriad of issues surrounding legal migration? (Not saying there are none, there are, just curious as to what you think they are)

Cultural displacement, ethnic ghettoisation, housing shortages, strain on education and healthcare to name but a few

The strain on education and health/social care has less to to do with immigration then you would think and everything to do with financial crash and the fact we had less money than was needed. I live in an area of naff all immigration and the education and health systems are creaking because the county council lost all it income from central government…this and this alone has trollied services. I’m not saying immigration does not have risks that need to be managed but it’s not immigration that has driven the health and social care system to its knees. I spend… Read more »

Of course, I’d never mean to imply it’s the sole cause of educational and healthcare strain. It probably is one of, if not the biggest though. There’s a net ~250,000-300,000 people moving here every single year while the native British population continues to decline; that’s an addition of more than the population of Southampton every single year. That’s a vast number of people to keep adding to an already overstretched system

I totally agree – it should not be just to follow migrants it must be used to deter them. If and when they arrive in the EU they must be processed and returned to Africa Asia etc. Europe and European People just cannot accept the amount that have already come – we do not have housing education healthcare and most important welfare Benefits – for citizens of other Continents. European Culture has been eroded so much by this mass migration and it is now longer Syrians fleeing WAR – but Economic Migrants who we should not have to support. In… Read more »

I don’t mind immigrants who have a way to support themselves, a skill the UK needs and will merge into UK society, but these ones traveling from countries where their only skill is sponge off the tax payer isn’t any use to the UK and isn’t helping the country.

Adding further to the problem millions of jobs could disappear through automation and AI in the decades to come. Imo for too long governments have grown the economy by adding people and not through growing what each person contributes ie productivity.

Never understood why BAe’s Mantis was never adopted by the UK it was marketed for as capable of border control. I seem to recall a video from the 09 Dubai airshow which mentioned the Mantis and border protection.

When has HMG ever taken border patrol seriously?

This was discussed here last year during the ongoing situation in the English Channel with migrants coming over in small boats and even canoes. There are too few Patrol Boats.

A sad and serious situation.

The failure to adopt Mantis is also a failure to support British industry. Using Mantis for Border protection would have been a lower level of investment than that needed to produce a fully armed drone and would have been an important step to the UK having our own drone to sell to others.

I would think iR signatures of people in small boats would be very easy for a drone sensor to pick up.

I agree. I’m no doubt ignorant here, but as far as the channel area is concerned could there be issues concerning airspace? I know the FL are much higher than this would fly but it is still busy airspace with other users lower down.

Is Mantis certified to fly in European airspace?

Yes. Mantis would have required certification but we’re paying General Atomic to build this into the Protector drones anyway

Don’t the coast guard use small airplanes, why don’t they use drones! Mantis would be ideal.

I don’t mind people actually seeking work – but that seems unlikely with many of them. I am rather worried that we have allowed hundreds of Iranians to get on boats and come into the UK – we all know they will not have been returned to France – Iran plays a long game – are the people being monitored or have they just merged into neighbourhoods and could have been sent here. Terrorist can look very innocent – and why suddenly are they coming here – there is no war in Iran ! Syrians no problem but Africans Pakistani… Read more »

I see both sides of this. As others have pointed out we have an ageing population in the midst of automation taking jobs – we simply can’t sustain influxes of migrants and refugees all of the time. At the same time, I’m not afraid to say that I feel sorry for people in poor, war torn areas fleeing to save the lives of themselves and their children from tyrannical regimes that use chemical weapons for example; the fact that they are willing to make that treacherous journey across the med says a lot I think, so I must say that… Read more »

Thanks Daniele, I often enjoy reading the thoughts of yourself, among many others, on here.

I just found it refreshing that you consider and respect both sides of the issue.

So often here and in the wider PC world trying to have a grown up debate on this subject gets the Liberals screaming from the rooftops. It has been happening since the 90’s and it needs to stop.

Had plenty of amicable discussions with you before Danielle despite our differing views… However, this idea widely propagated amongst many people that the left/liberals are somehow always the ones who “scream from the rooftops” etc is daft. You only need to look at some of the comments on here (not yourself) and elsewhere in society to see right/Conservative voices can be equally irrational. I mean Cam as first commenter jumps on the “monitor” as though all the drones are being used for is to take holiday snaps for those on the boats as opposed to monitoring to support further action…… Read more »

Fair enough Robert. My apologies for that wording.

Sorry for snappiness Danielle. Just a frustrating thing I see from others, and knowing you’re more willing to listen than some people wanted to point out.

Lol no need to apologise Robert…I didn’t take your post as snappy at all. I was apologising to you!

I know the drones must take further action Robert1 like send a big rescue boat to pick them up ASAP and take them to Europe, but they dont turn or send the illegal boats back to where they came they just watch them enter illegally and that’s just going to make more want to come and risk their life doing so. We need to help refugees I think we can all agree on that but most are economic migrants and take the place of people who actually really need a safe place to live blocking the system and making everything… Read more »

Sure is Charlie, wasn’t it a city the size of Liverpool coming into the UK every year at one point? We can’t sustain that kind of influx every single year without huge extra investment in everything from schools to hospitals and of course Housing. It’s a hard situation and lots get labelled racist for not wanting that extra growth which is ridiculous, I live in Scotland and our government are reaching immigration targets years before they need to be and it seems like they want mass immigration I’m all for helping refugees, but we have to have legal sensible targets… Read more »

Some fair points, as I said a tricky issue. Being from Liverpool that seems like a lot of people haha?

Lol monitor? Italy can start by enforcing immigration laws. They just released that ship captain who brought in illegals. This is human trafficking and should be enforced!
But Italy does not care, because they know that immigrants only transit via Italy and travel north to other countries!

Merlins join HMS Queen Elizabeth as she prepares for F-35