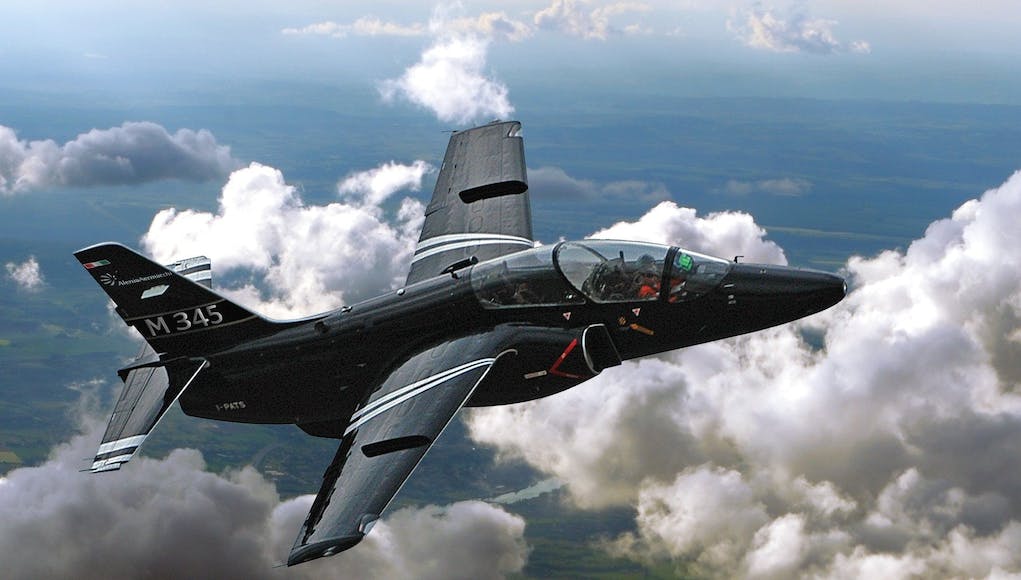 The M-345 is a jet training aircraft with costs comparable to those of a turboprop aircraft.

The new aircraft allows the Air Forces to contain the training times and provide students with a more performing platform as compared with today’s turboprop trainers in service all over the world say Leonardo.

Moreover, the new M-345 will, they say, allow students to be exposed to the most demanding missions of their training syllabus to obtain a high-quality training at much lower costs.

“The M-345 has a cockpit fully representative of the fighters, excellent external visibility. Thanks to its wide flight envelope with high maneuver capability at high speed and both low and high altitude, its modern avionic systems, the high load capacity and to its performance level, the M-345 can carry out also operational roles.

The aircraft’s long fatigue life, the maintenance philosophy organized only on two levels that eliminates the expensive general overhaul and the Health Usage and Monitoring System (HUMS) are the key elements that help to reduce the operating and life cycle costs of the M-345.

Thanks to the aircraft’s sophisticated embedded training simulation system the pilot will see his training mission enhanced by a whole series of events which will have been arranged in the planning phase including other airplanes interacting with the mission itself and connected via data link with flying assets, ground simulator and other simulation devices. The system also envisages the presence of a Mission Planning and Debriefing Station (MPDS), with which it is possible to prepare mission scenarios, upload and download data and review the missions carried out in the debriefing phase.”