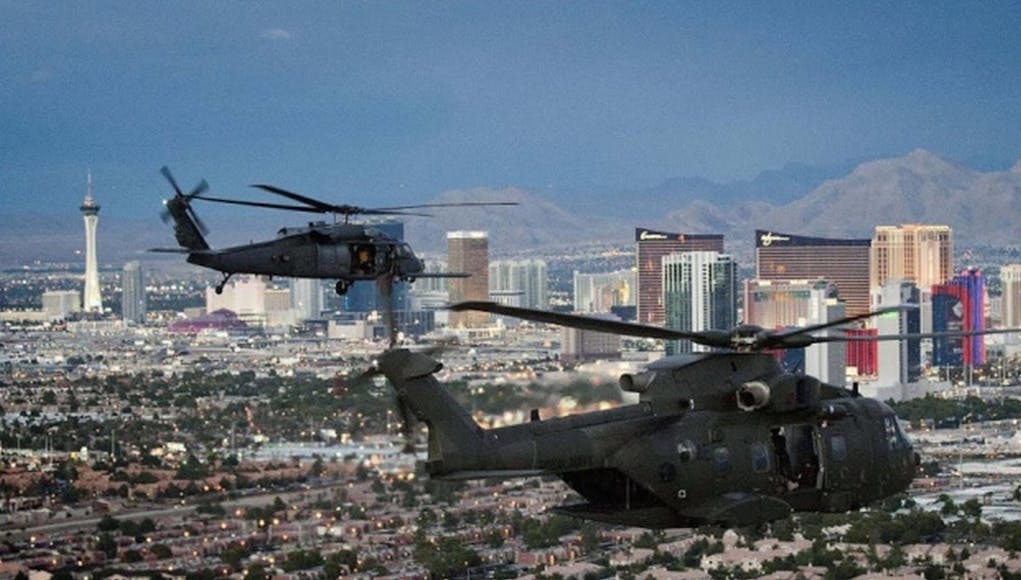 The Commando Helicopter Force have taken their Merlins to Nellis Air Force Base outside Las Vegas for two weeks of training to rescue casualties while under fire.

Commando Helicopter Force is an element of the Joint Helicopter Command. It provides helicopter support to 3 Commando Brigade Royal Marines.

845 NAS only recently received its Merlin Helicopters from the former 28 (Army Cooperation) Squadron in July 2015.

3 Commando Brigade is the main manoeuvre formation of the Royal Marines. The force is supported by units of the Royal Engineers, Royal Artillery, and the Fleet Air Arm.

“The new helicopter requires new ways of thinking and working – which is why 845 Naval Air Squadron left their base at Yeovilton behind to head to the desert to train with 3 Commando Brigade whose marines are currently blasting their way through the live-fire exercise area at Twentynine Palms.”

“Half a century of experience, training and active service has lead them to be world leaders in joint personnel recovery, so it was clear that we were being mentored by the subject matter experts. 66th Rescue Squadron couldn’t have been more welcoming, committing a huge amount of time and resource to developing our understanding and tactical appreciation for personnel recovery. It was some of the best aviation training I have experienced in my career.”

The force is commanded by a Royal Navy captain. Squadron personnel are primarily drawn from the Royal Navy and Royal Marines however there are also exchange officers from the Army Air Corps, Royal Air Force, United States Marines Corps and from 2016 the Royal Danish Air Force.

God, the Merlin is such a beautiful aircraft.