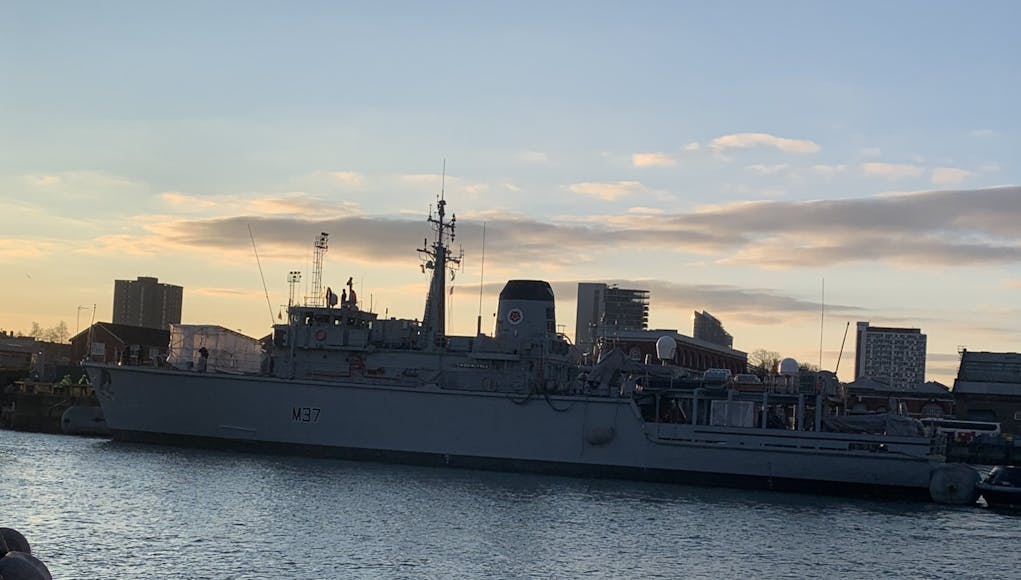 HMS Chiddingfold is undergoing a final phase of maintenance as she prepares to deploy to the Gulf.

According to the Royal Navy, the minehunter has entered the dry dock in Portsmouth Naval Base and there, work will take place to ensure she is ready for three years of operations forward deployed in the Gulf.

“The ship’s company currently with HMS Chiddingfold, Mine Countermeasures 2 Crew 1 (MCM2 Crew 1) known as the Fighting Aces, spent time on her sister ship HMS Ledbury in the Gulf last year. They will use their experience to ensure the ship is ready to deploy following the usual extensive trials and training.

They will then handover to the crew responsible for sailing her to the region. For the ‘docking down’, naval base tugs helped manoeuvre the minehunter into the narrow dock and 10 hours later, with the water drained away, Chiddingfold’s hull was accessible for contractors to inspect. The current crew will now continue to work with the Royal Navy’s industry partners to ensure the ship is ready for her voyage to the Gulf.”

Once there, she will be stationed at the UK Naval Support Facility in Bahrain.

HMS Chiddingfold will relieve her sister ship HMS Ledbury to become one of four mine countermeasure ships – it is the first time she has returned to the Gulf since 2017 say the Royal Navy.

When she sails, MCM2 Crew 1 will move onto HMS Cattistock where they will conduct operational sea training before deploying.

I bet these small ships are the best to serve in.

So long as it is not too rough.

Ever seen the Cruel Sea? Some great shots of a Flower Class corvette in heavy weather in the North Atlantic. Not for the faint hearted..!

Probably get more time at sea

Be nice to see her back out here.