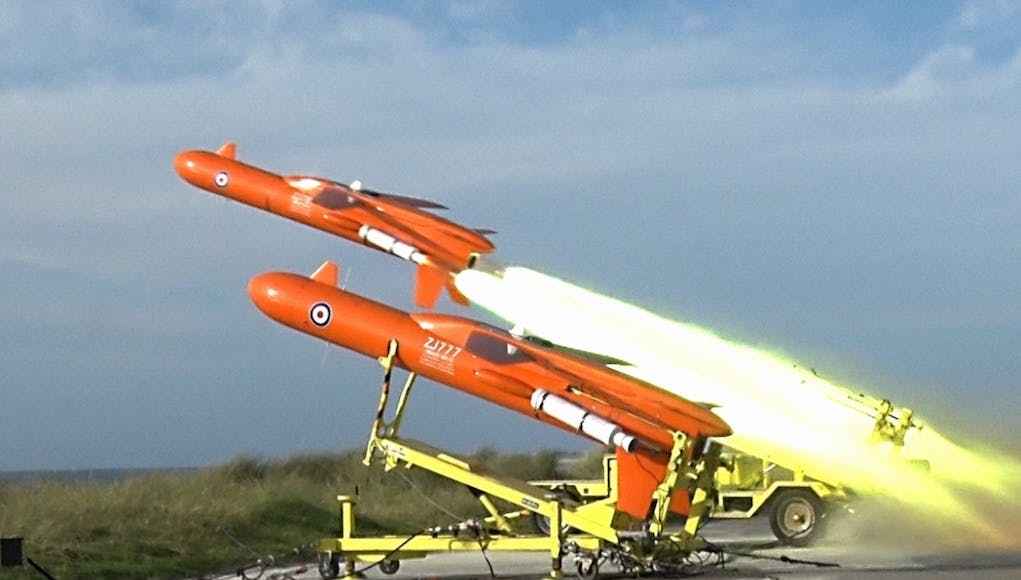 QinetiQ has flown Mirach and Firejet aerial targets together for the first time during a live exercise from the Hebrides in Scotland.

In a first for QinetiQ, two Firejets and two Mirach targets were launched simultaneously and flew in formation to be engaged by participating navies, representing and marking another step forward in the enhanced service offering from QinetiQ to customers say the company.

One of the most sophisticated and complex exercises of its type ever undertaken in Europe, Formidable Shield is designed to test NATO countries integrated air and missile defence capabilities. QinetiQ, operating Ministry of Defence (MOD) Hebrides Range as part of the Long Term Partnering Agreement (LTPA), is managing the safe operation of the Range for the eight participating countries: Canada, France, Germany, Italy, Netherlands, Spain, United Kingdom and United States.”

Formidable Shield, led by the US 6th Fleet and supported by the UK MOD, aims to improve allied interoperability in a live-fire integrated air and missile defence environment, using NATO command and control reporting structures

“The launching of both Firejet and Mirach targets at the same time is an important first, as part of Formidable Shield. Providing sophisticated and complex scenarios is for the UK’s future defence capability.

This will ensure the Range continues to be attractive to International and UK customers.”

I can’t help thinking that all it will do is create a false sense of security. The threats that need to be replicated are multiple, supersonic, high-g terminal phase missiles and single, hypersonic, non-manoeuvering missiles. Could SM-6 missiles be used as targets?

True on the first point. On the question of SM-6 target use they could and probably should but at 5x the price I think the Naval Affaires committee in Congress would have a heart attack. Also I am pretty sure the MOD would just stroke out after seeing a check with that many zeros for a 1 week exercise.

Haha, good point. It does smack of past history, though; ignoring the threat of submarines and then aircraft because truly could countering those threats would have required a paradigm shift in naval thinking too radical to contemplate in peacetime. I trust that they are routinely simulating the threat electronically. The Russians are building and converting submarines specifically to conduct saturation supersonic missile attacks. The Chinese won’t be far behind. We cannot ignore the threat.

Don’t you know that every country prepares for the last war bar the aggressor of the next?

no peace time drill / test will ever really simulate a war time attack. In a war time, the window of attack is wide open causing user fatigue caused by long hours of consentration/stress/false alerts. more fundamentally the targets are designed with knowledge of the weapon systems/tactics and so unconscience bias creeps in when designing country measures. pretty much every high tech wep platform has failed or not performed as expected when it comes to the real thing. for sure we have to drill but no point wasting huge amount of money on it when it is known it doesn’t… Read more »

True re fatigue and concentration but perversely that seems to me to be one advantage to the defence when engaging hypersonic missiles. For traditional engagements there is understandable reluctance to remove the human from the loop in case a friendly is identified as a target and engaged. For an incoming hypersonic missile however, if a track is heading towards the defending ship (or area of protection) at mach 5 or greater then you can be damn sure that it isn’t one of your own aircraft or ships and so, given the huge margin for error between target and friendlies, I… Read more »

It probably depends how good a computer can be at identifying the real targets rather than just radar noise. I suspect there is also a risk that a near by ship has also fired at the missile and it is intrepreted as a unfriendly fire.

Once a track has been held for a km or two I assume radar clutter can be discounted. Also, a friendly missile isn’t going to be going at Mach 5 even if fired directly at the radar system feeding the computer. I should caveat all this by saying “with today’s technology” since if hypersonic defence missiles are developed then discrimination purely on speed would become an issue. One possibility to combat friendly hypersonic identification once those do come into the picture might be for any friendly vessel launching a hypersonic missile to pre-declare at least its initial vector to the… Read more »

i guess there is a question of whether hypersonic defensive missiles are needed, considering they track into the missile rather than chase them. 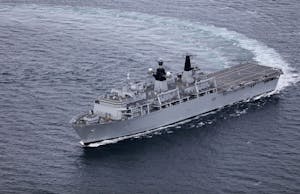 June 10, 2021
HMS Albion fended off attacks from Spanish jets as the assault ship tested her air defence skills in the Baltic Sea.