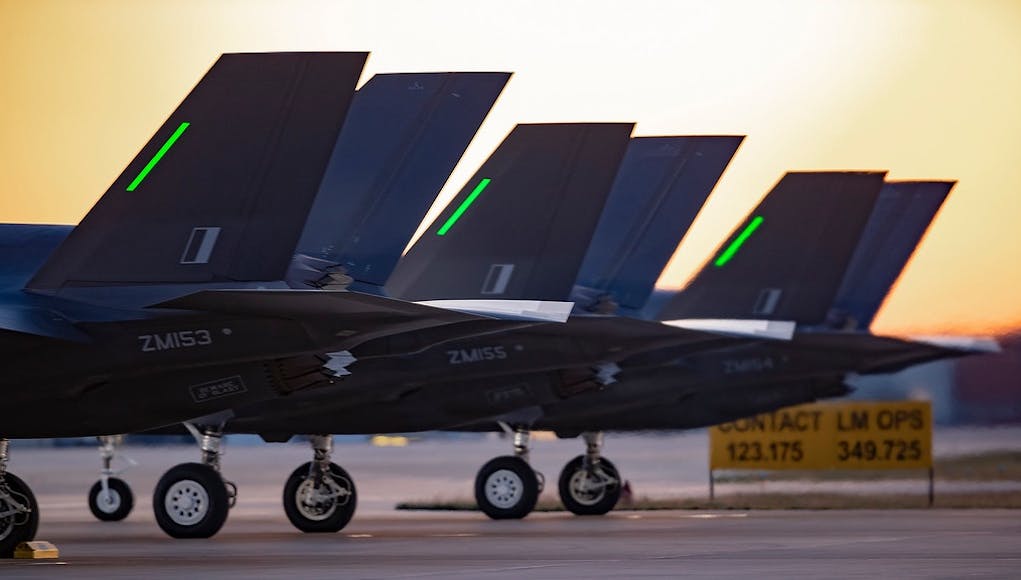 A Voyager tanker brought three new F-35B jets over the Atlantic to their new home in the United Kingdom.

It should be noted that numbers right now are currently where they’re expected to be and inline with the 2015 Strategic Defence and Security Review.

How many will the UK get?

In an exclusive report by Lucy Fisher at The Times, it was claimed that the Ministry of Defence have discussed procuring 70 F-35 jets instead of 138 as a ‘minimum credible F-35 fleet’.

It should be noted that the UK is only committed to buy 48 so far.

The report states that Britain could buy only half its target of 138 F-35 jets, according to sources close to the government’s defence review and that “the wider British aspiration to buy 138 of the aircraft over the lifespan of the US-led programme is seen as unlikely to be fulfilled”.

A recent report from the NAO warns that not enough funding has actually been made available for sufficient F-35 jets. The report titled ‘Carrier Strike – Preparing for deployment’, examines the MoD’s management of the programme since 2017 and the risks towards achieving Carrier Strike’s full capabilities.

“The Department has not yet made funding available for enough Lightning II jets to sustain Carrier Strike operations over its life. From 2015, its intention has been to buy 138 Lightning II jets, which will sustain Carrier Strike operations to the 2060s. The Department initially ordered 48 jets but has not yet committed to buying any more. In response to wider financial pressures, it will also receive seven of the 48 jets in 2025, a year later than planned.

Since we reported in 2017, the approved cost of the Lightning II project has increased from £9.1 billion to £10.5 billion (15%), reflecting approvals for capability upgrades, integration of UK weapons and sustainment costs. There will be further cost approvals to upgrade the existing fleet with new software and weapons, and there is a continued risk of cost increases due to exchange rate fluctuations. The Department plans to reassess the number and type of Lightning II jets that it needs in the Integrated Review, but its ability to use Carrier Strike will be constrained if it has fewer jets than planned.”

There will undoubtedly be many rumours prior to the upcoming defence review and we can only advise that you take everything you read on this subject with a pinch of salt as, for the most part, you will be reading about options or worst case scenarios and not firm plans.
3.5 4 votes
Article Rating

Saw the last one fly over early evening. Now, ” Please Sir, can we have some more “

I’ve never had the pleasure of seeing one with my own eyes. Is it true how loud they are?

At the height it was flying and the low speed, it wasn’t that bad at all, I get to see quite a few different aircraft where I live and you get to know each aircraft’s sound.

Here in Surrey the most I get are Chinooks bar when Farnborough is on.

I always remember when I’d visit my Grandparents in North Devon in the 80s. Lots of low flying from Chivenor and Brawdey, so Hawks from the TWU’s most days rocking the house. And I mean low!

But the absolute highlight was what seemed like a squadron ( at least 7 ) of Tornado following each other closely right over our farm at low level.

I was, naturally, beside myself with excitement. I have never forgotten it.

Nanny was well pissed off!!

I worked at Chivenor, we used to get all sorts, as a kid I used to fly Kites up on the Hill overlooking the base, I once counted 48 Hunters all lined up ! Saw them all leave in formation too when they went to Brawdey. We would stand at the end of the Runway on the west bank of the Pill, right in line with the centre of the runway and play chicken with the planes taking off, It was really mad on Air Day with the Lightnings going ballistic ! oh and the Vulcan Howl was immense, it… Read more »

Did you ever get wind of any flights of “Black” aircraft out of Yeovilton mid l late 90s? Similar to the Boscombe stories.

There was a rumour once but I can’t recall what it was…….F117 possibly……It’s not exactly remote though, most aircraft pass over the “Sprawling Metropolis” of Ilchester, so would be easily spotted and the “Boys at the back gate” would have been all over it !!! There are 4 Black painted Hawks based there and the Boscombe aircraft fly over quite often. Used to see a Jaguar and Alfa jet at times, only see the Gripen now though.

No, it’s not remote. Neither is Boscombe to be fair with Amesbury next to it.

No, this was no F117, this was a pure Triangle like so many other “black” aircraft sightings and arrived and departed dead of night.

I heard the F111’s flying over on their way to Libya too, Lots of them and a long time going over. No one believed me though.

Probably an extra delivery of Dairylea for 848 squadron. !!!!

Oh and another thing mate…… If you ever want to get really bored, ask me about the RN …… I’ll probably keep you up for days lol

I’ve removed myself back to Cumbria, looking forward to them flying past Ulverston on their way to Spadeadam via the Lakes!

Hi Levi, I saw a US Marine Corps F-35B display at Fairford a couple of years ago.
Certainly louder than the Harrier in the hover.

The Harriers had Ear splitting noise in the hover, too close and your Ears would Bleed !

this is a critical capability for the UK and we really do need to purchase 138 we should all remember that this platform is meant to replace 2 previous platforms in the Harrier and Tornado (c. 500 aircraft in both fleets) and whilst we can’t expect the same volumes we do need to continue to pressure HMG to maintain sensible fleet sizes. I also believe there will always be a third fleet being built up and in that case its tempest which will replace Typhoon surely. F35 is a great product, good for UK business and good for our force… Read more »

Its the answer for the UK with our limited resources and has great potential as an expeditionary a/c which is why USMC are the premier operator.

couldn’t agree more, there’s also something to be said about an aircraft that can operate austerely.

I see the F35B and the apaches (bargain of the century and mad that we haven’t ordered 138 of those as well) as being our primary air assets in support of ground forces.

Add in loyal wingman and this is a game changer for a force the size of the UK.

This is all well known. For me crucially what happens after 2023?
We are going to need at least another 48 F35B ordered to make carrier strike a viable option and provide some limited RAF jump jet capacity.
I know RAF want some the A version. Which is fine but only after we get another 48 of the B version ordered.

Are we due to receive all 48 by 2023? I have a feeling we will procure around 70-72 by 2030, followed by a 10 or more year gap before replacing the originals with a second batch. I don’t think the F35 will have the same lifespan as the F16 without replacing all of its internals and it might just be cheaper to buy new further down the line. The production line will be busy until 2040 with orders from the US, Japan, Italy even India may want the F35B variant.

It looks like 48 by 2025 now, a two year delay. It is what it is. Being a tier 1 partner has given us what advantage exactly?
Two frontline squadrons of F35A’s would have greatly enhanced Typhoon Force but that option was never taken up. Instead we will have to limp along for some years with an inadequate amount of aircraft on vessels that can cope with 40+ jets.
3 new ones welcome, keep em coming……

I don’t think we can blame being a teir 1 partner on our lack of orders. It does give us 15% workshare which is lot more than our order book currently accounts for.
If we hit 72 by 2030 that will be it until they are replaced.
Tempest seems to be where the UK government wants to lay its eggs. The problem is even if the UK overs 200, Italy will struggle to order 100, Sweden will struggle to order 50. I think we need orders of around 500 to make it viable.

BB85……Is Tempest just a pipe dream……are we better off buying of the shelf………would we manufacture and export enough to cover production costs……could turn out to be TSR2 all over again…….or we make 4 a year for next 30 years!!

If we are realistic we are going to need the numbers until Tempest enters full operational service.

We’ve gone over this so many times over the years.

It is wait and see.

And no A’s until sufficient B are procured to surge 1 carrier or split the force on both.

Is there still an argument for procuring As? Seems to me it adds another line of logistical and training complexity when the gap could be covered more simply and more cheaply by buying more Typhoons to replace outgoing T1 air frames then moving to Tempest

Could be out get out of jail card with ref to the committed numbers.
Agree with your comments though.

Hi Levi
Until recently, there was certainly a very strong argument for procuring As – after about seventy STOVL-Bs had been delivered for the QE class carrier.
But I think the UK’s plan for Tempest now weakens the case for a split purchase/and indeed a full buy of 138 units (unless there is a contractual/political blocker).

So, does this mean IOC (Maritime) is still on schedule for the end of the year ?

Morning Geoff, good question.
21, less the 3 instrumentation aircraft, gives 18 “combat” aircraft, so that on paper could give us a squadron of 10-12 on the carrier with the other 6-8 for training/maintenance. Is that enough to declare IOC for Carrier Strike? Allowing for USMC on board, I’d say so, yes.

Hi Joe….who else is flying F35Bs….would they want to come and play on our aircraft carries……

Off the top of my head I believe that it’s the USMC, Italy, Japan and South Korea who are F-35B customers- I may have missed someone though. And the other answer is a pretty big yes, I think! The USMC are already involved, but I would expect the recent anouncement that the QE CSG will sail in Japanese waters next year means that both the South Koreans adn Japanese will at least have a look around. Italy will have plenty of opportunity too, what with the CSG transitting the MEd on a fairly regular basis to get to anywhere east… Read more »