The exercise started on the 13th of July and will end today off coast of Bulgaria in the Black Sea region.

NATO say BREEZE is designed to ‘enhance the interoperability of the participating units and strengthen cooperation by practising different warfare techniques in a multi-dimensional scenario’. Multinational participating forces and their crews will be tested in a wide range of warfare tactics focusing on regional security.

Exercise Breeze 2018 provides an excellent opportunity for NATO forces to train and build interoperability with additional Allied maritime forces. The groups presence in the Black Sea is part of an overall increased focus on the Black Sea region increasing the presence of the Standing NATO Maritime Groups in the Black Sea from approximately 80 days in 2017 to 120 days planned in 2018.

And were these NATO ships, who were “approaching” Russia territorial waters, “intercepted” and “escorted” by Russian navy ships? Oh, you Nationalists are so silly. You childish nationalistic Propaganda is so transparent. Now if you are so nationalistic, why do you always advocate that UK Military Equipment by bought from the US and the British economy should be closed down? I bet this publication is owned and financed by the CIA or the Koch Brothers..

Can we get this guy one standard issue tinfoil hat please….that or I smell a Russian bot….

Shame the exercise didn’t occur sooner because then the Royal Navy would have been in command of both maritime groups.

Fair point, but perhaps it’s better for the interoperability of the two groups if they’re commanded by different countries. 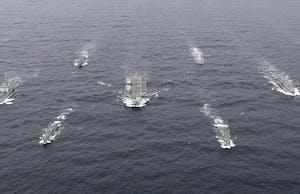