The Secretary General took part in a panel session on the ‘Future of the Transatlantic Alliance’, together with German Defence Minister Ursula von der Leyen, Polish Foreign Minister Jacek Czaputowicz, former US Secretary of State John Kerry and Professor Kishore Mahbubani of the National University of Singapore.

Mr. Stoltenberg stressed that Europe and North America have stood shoulder-to-shoulder in NATO for over 70 years, protecting common interests and values. The Secretary General noted that Europe and North America are doing more together – modernising the NATO Command Structure, strengthening NATO’s cyber defences and investing more in collective defence.

Since 2016, the Secretary General said, European Allies and Canada have spent an extra 41 billion dollars in real terms. Mr. Stoltenberg announced that by 2020, this figure is expected to increase to 100 billion dollars. “Based on the national plans coming in from all the Allies, they will add $100 billion by the end of next year,” he said.

The Secretary General added that NATO Allies have also demonstrated unity on arms control, speaking with one voice on Russia’s violation of the Intermediate-Range Nuclear Forces Treaty. Allies have called on Russia to return urgently to full and verifiable compliance with the Treaty.

The proposed German / France military partnership will fit uncomfortably within NATO, if it ever comes to pass. France has aspirations to become increasingly global with its forces, where Germany is merely committed to limited overseas involement? So, how do military planners in both countries reconcile with this mix of agendas? NATO, must have issues with these latest objectives and maintaining a clear vision going forward?

Now all we need is the European NATO countries to commit in law to meeting the 2% criteria and for that criteria to be clear and unambiguous.

2% needs to be abandoned and instead prioritize capabilities where there needed per country e.g should Germany concentrate on land forces armour etc over naval forces, UK navy air force over army. Seems pointless nato nations overlapping in capabilities, figure out what’s needed where and get the individual nations to focus on that rather than having a little bit of everything and not enough of anything

Exactly so delegate certain capabilities to individual nations needs and finances rather than spending their budget on things they probably don’t need, smaller nations trying to run a modern air force end up with a few jets that they can barely afford and offer no real capability would be better off investing in ground forces and leave air cover to the ones who can afford it would be one example

the whole structure of nato needs changing, keep 2% but like you say X country spends all of that on its army/capability required in that local area-as that is what would serve nato and itself best and if it wants to be part of the alliance then that’s what it needs to do, I think all countries on the eastern frontier should concentrate on heavy armour/ground forces first and foremost let UK France Spain Italy and Germany etc concentrate on air power and forward base permanently jets and choppers to protect those areas

J, OMG, You are not alone In your thinking mate and neither am I (thank the Lord). Mentioned this a while back and got the cold shoulder. As a Land Mass, Europe has Different areas of Interest, therefore It has different Defence requirements, Spending a blanket 2% across all areas of Defence per Country makes no sense to me whatsoever.

Thanks for giving weight to my own Take on things.

Hmmm. Some have. Others hide.

Without the USA Europe is pretty toothless.

Personally, I think there is an Inherent danger in Imposing a “Minimum of 2% GDP” figure on European Governments. What we Really need is Defence expenditure consummate with the threats based upon Location and potential loss/gain/damage. The UK Is an Island, therefore We should concentrate on It’s defence (Ships and Aircraft mainly). Germany Is to all intense and purposes, Land Locked but with a border shared with many former USSR Country’s This makes It more Ground forces Focussed with an increased Airforce Capability. France has historically been a Battleground so I’d like to see more effort in closing the back… Read more »

“against one potential Enemy, by which point, It would be pretty much Game Over”
The same enemy as us, so they need to keep it at all costs, UK & France as the only nuclear powers in Europe shoulder more than our fair share of the burden, the others need to start doing their bit

Imo, the Americans buy influence, this suits all parties and the term “paying for Europe’s defense is used as a political football to suit the Americans where and when required. NATO’s birth was highly strategic, a noble idea but we are forgetting that Russia is a European country ran by a man driven by fear, passion and a love for his motherland. Our democracy compared to Putins is the weakest of the two imo, I’m not saying we curb free speach etc and live a socialist and communist rule by someone with bigger balls than someone with elephanitis and an… Read more »

Saying that countries in NATO need to spend 2% on defence in a certain area isn’t going to fly with alot of countries, lets say that im a bit of a realist, the smaller countries within NATO aren’t going to spend 2% on their army alone and leave their air force and potential navy to rot because what happens if NATO falls apart? what happens if that country face an invasion and NATO doesn’t come to their aid? traditionally these large treaty “we will defend you and you defend us” affairs tend not to stand up when a big conflict… Read more »

Yes, I Agree entirely but, Our 2% is spent on such a broad spectrum of Commitments from Home defence, Anti Submarine warfare, Blue Water capability, Worldwide Territory protection, Anti Piracy, Nuclear Deterrent, Fisheries Protection/anti Immigration and Intelligence, Special Forces Operations to name just a few. Personally, I’d like to see a real time Increase in Defence spending commensurate with our Goals/commitments/Aspirations. Places like Albania just need to look after their Airspace/Borders. 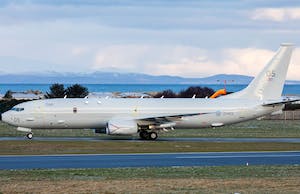