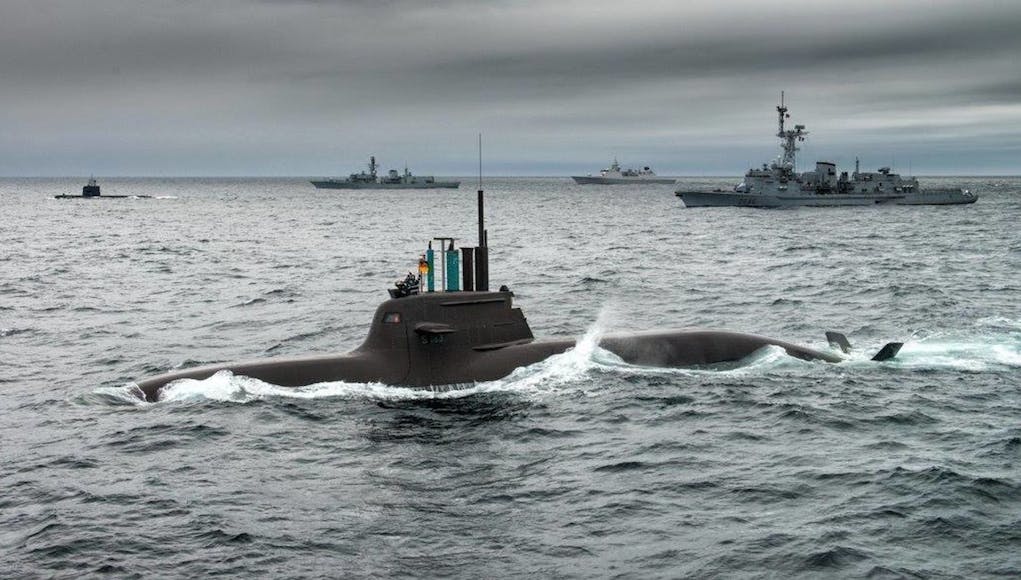 Share
Facebook
Twitter
Pinterest
WhatsApp
Email
NATO Anti-Submarine Warfare Exercise Dynamic Mongoose 2018 has started off the coast of Norway, with ships, submarines, aircraft and personnel from 8 nations gathered in the North Atlantic Ocean.
Host nation Norway is providing support from the Harstad and Narvik Harbors and Andoya Air Base say NATO in a release.
Submarines from Norway under operational control of NATO Submarine Command, will join 7 surface ships from Denmark, Netherlands, Poland, Spain and Turkey under the command of Standing NATO Maritime Group One (SNMG1) Commodore Søren Thinggaard LARSEN.
To support the simulated multi-threat environment, 3 Maritime Patrol Aircraft (MAP’s) from Germany, Norway, and the United States will operate from Andoya Air Base under operational command of NATO Maritime Air Command (COMMARAIR).
“NATO’s annual anti-submarine-warfare exercise DYNAMIC MONGOOSE remains one of the most challenging exercises and an excellent opportunity for NATO nations’ naval forces to practice and evaluate their Anti-Submarine skillset in a challenging environment.” said Rear Admiral Andrew Lennon, NATO Submarines Commander.
“This exercise is a unique opportunity to enhance naval forces’ warfighting skills in all three dimensions of Anti-Submarine-Warfare in a multinational and multi-threat environment. We are most grateful to Norway and the Norwegian Navy for offering to host our exercise.”
The alliance say that the exercise is aimed to provide all participants with complex and challenging warfare training. To better enhance their interoperability and proficiency in anti-submarine and anti-surface warfare skills, each surface ship will have the opportunity to devise and execute a variety of tactics to locate and track submarines. To further enhance the training benefit of the exercise, fixed-wing and rotary air assets will also practicing their sub-hunting techniques in close coordination with the surface units.
“I look forward to SNMG1 taking part in exercise Dynamic Mongoose, to further enhance our ability to conduct advanced Anti-Submarine Warfare in a realistic and challenging environment in the High North off the coast of Norway,” said Commander SNMG1, Commodore Søren Thinggaard Larsen.
“SNMG1 just completed Exercise BALTOPS in the Baltic Sea and we are currently at very high readiness. We are looking forward to this great opportunity to continue to train, experiment, and share best practice and lessons learned among all participating units. We are stronger together.”
0 0 vote
Article Rating

Apologies, slightly off topic but the Chinese Navy have just knocked out a video of their ships/planes and sailors at sea and I presumed that some folks here, wouldn’t mind a butchers
https://www.youtube.com/watch?time_continue=245&v=z9MbRjbKWj4

Am I the only one who is struggling to keep a straight face due to the exercises name. Please tell me it was computer generated as opposed to something thinking it was actually a good idea to name a serious military exercise ‘Dynamic Mongoose’.

Its still better than some of the ‘Rainbow’ code names we had during the cold war. ‘Green cheese’ springs to mind as a particular example. The Russians would never have figured out it was a nuclear tipped anti ship missile until it em.

I must say, from a purely aesthetic POV, those German U-Boats, are nice looking pieces of kit.

A shame they keep crashing them and keeping the others in port for repairs.

And the self-proclaimed experts in the, ahem, field are missing. I wonder why?

Sorry Riga what I was trying to say was that a lot of NATO navies aren’t taking part not just us. Why ? Well for us money !

That looks like a T23 in the background? Is the RN taking part?